A while back I wrote about using DynamoDB TTL to implement ad-hoc scheduling. It generated some healthy debate and a few of you have mentioned alternatives including using Step Functions. So let’s take a look at some of these alternatives, starting with the simplest – using a cron job.

We will assess this approach using the same criteria laid out in the last post:

The set up is very simple:

With CloudWatch Events, you can run a scheduled task as often as every minute. That’s the best precision you can get with this approach.

However, this approach is often constrained by the number of tasks that can be processed in each iteration. When there are too many tasks that need to be executed at the same time, they can be stacked up and cause delays. These delays are a symptom of the biggest challenge with this approach – dealing with hot spots.

When the Lambda function executes, it would look for tasks that are at or past their scheduled execution time. For example, the time now is 00:00 UTC, our function would find tasks whose scheduled_time is <= 00:00 UTC.

What happens if it finds too many tasks that it can’t complete the current cycle before the next cycle kicks off at 00:01 UTC? To avoid the same task being executed more than once, often we’d set the function’s Reserved Concurrency to 1. This ensures that at any moment in time, only one instance of our Lambda function is running.

However, this means tasks that are scheduled for 00:02 UTC is not processed until the first batch is complete (see above). This can create unpredictable delays and can significantly impact the precision of the system.

Alternatively, if you can mark a task as having started then you can prevent subsequent cycles from picking it up again except in failure cases. One such scheme might be to add a started_at attribute to the task definitions. When the cron function looks for tasks to execute, it’ll ignore tasks that are started but have not yet completed or timed out.

Doing this would allow you to run multiple instances of the cron function without risking processing a task more than once.

But that still leaves the issue that hotspots can cause some real damage:

Of course, you can process the tasks in parallel inside your code. But that adds complexity to your business logic and has other failure modes such as:

Personally, I think a better approach would be to hand off the tasks to a SQS queue instead. This SQS queue can trigger another Lambda function. 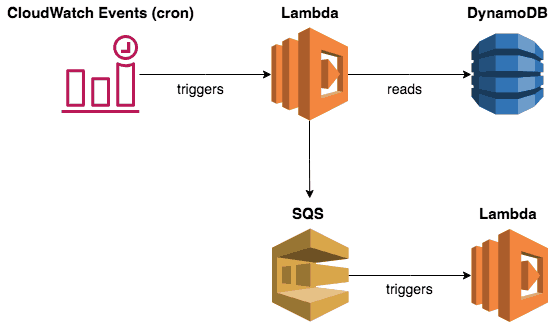 With SQS, you have built-in retry and dead letter queue (DLQ) support. The Lambda function would process SQS tasks in batches (of up to 10). The Lambda service would also auto-scale the number of concurrent executions based on traffic. Both characteristics would help you with throughput.

However, since this is an extra hop it will add delay to tasks being executed on time. Which impacts the precision of the system. So, maybe you don’t do this all the time. Instead, process the batch right away if the batch is small. Only when the batch is over a certain size, then defer processing through a SQS queue. 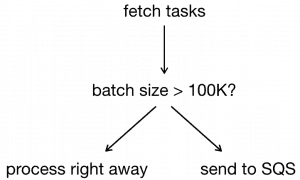 I used DynamoDB in all the examples in this post because it’s easy to use and would suffice for many use cases. However, it’s not great at dealing with hot keys. Unfortunately, that’s exactly what we’d be doing here…

You are constraint by the limit of 3000 read throughput units per partition. So if your system needs to scale to more than a few thousand tasks per batch then DynamoDB is probably not for you.

This batch-based approach is not considered modern. But for many use cases, it’s also the simplest way to schedule ad-hoc tasks.

For instance, if your use case is such that:

Then this approach of using a CloudWatch schedule and Lambda is likely sufficient for your needs. Even if you’re going to experience some hotspots, there are ways to mitigate them to a degree. As we discussed in this post, there are several things you can do to increase your throughput:

I hope you have enjoyed this post, as part of this series we will discuss several other approaches to scheduling ad-hoc tasks. Watch this space ;-)