I have been working on a large AppSync project for a client these past few months. The initial version of the app was built in just a few weeks, but the client has commissioned additional features and the project has kept growing. At the time of writing, this project has over 200 AppSync resolvers and 600 CloudFormation resources.

Along the way, I learnt a few things about scaling a large AppSync project like this and hope you find them useful too.

But first, let me catch you up on where we are in the project:

This might be very different from how your projects are set up. Every decision I made here is to maximize feature velocity for a small team. The client is a bootstrapped startup and cannot afford a protracted development cycle.

If you want to learn more about this project and how I approach it from an architectural point-of-view, please watch this talk:

On a high-level, the backend infrastructure consists of these components: 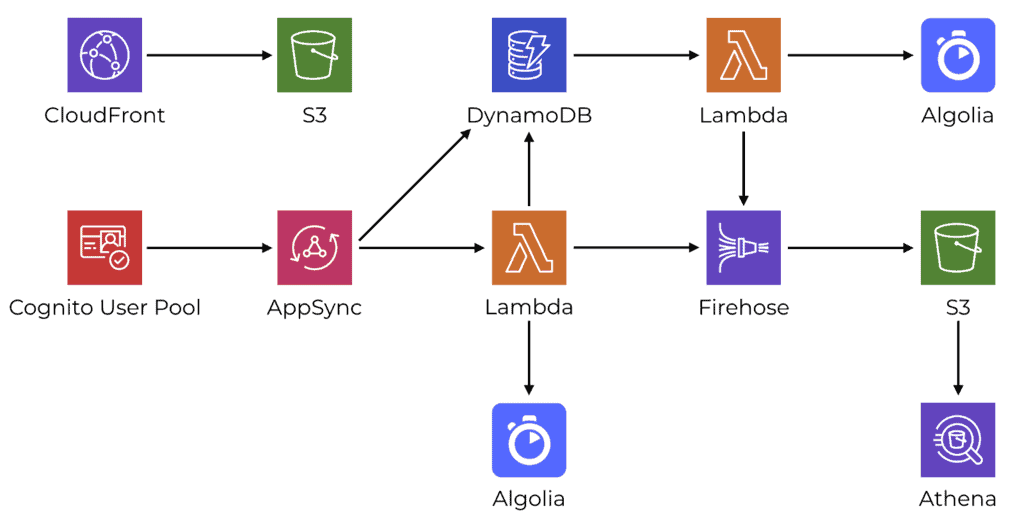 Even though AppSync integrates with DynamoDB directly in most cases, there are still quite a few Lambda functions in the project. As you can see from the System Map in Lumigo. 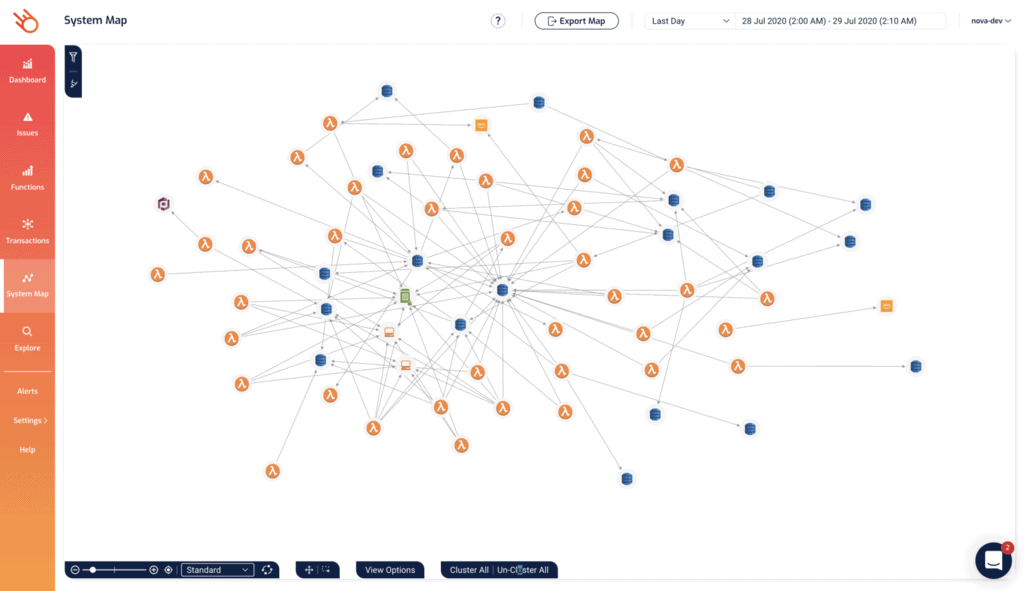 At first, everything was in one CloudFormation stack and it didn’t take long before I hit CloudFormation’s 200 resources limit per stack.

Since I’m using the Serverless framework, I can use the split-stacks plugin to migrate resources into nested stacks.

The advantage of this approach is that it doesn’t require any code change to my serverless.yml. Existing references through !Ref and !GetAtt still work even when the resources have been moved around. 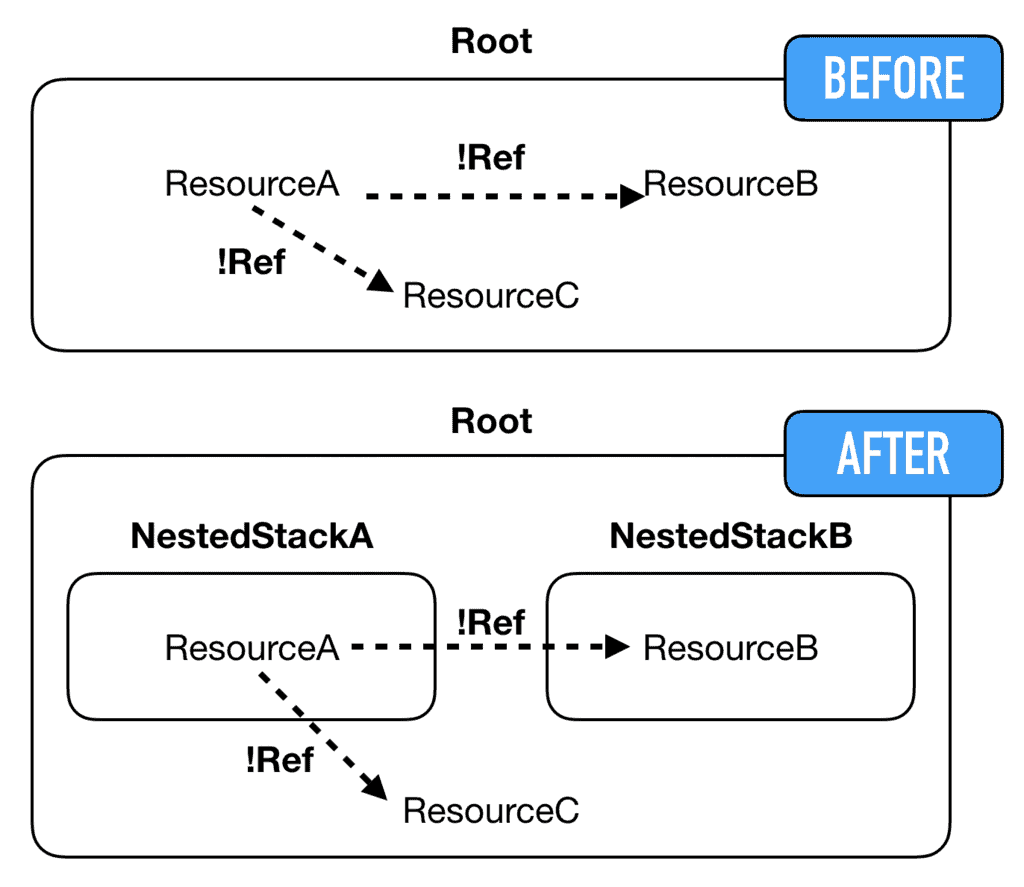 The split-stacks plugin converts these references into CloudFormation Parameters in the nested stack where the references originate from (let’s call this NestedStackA): 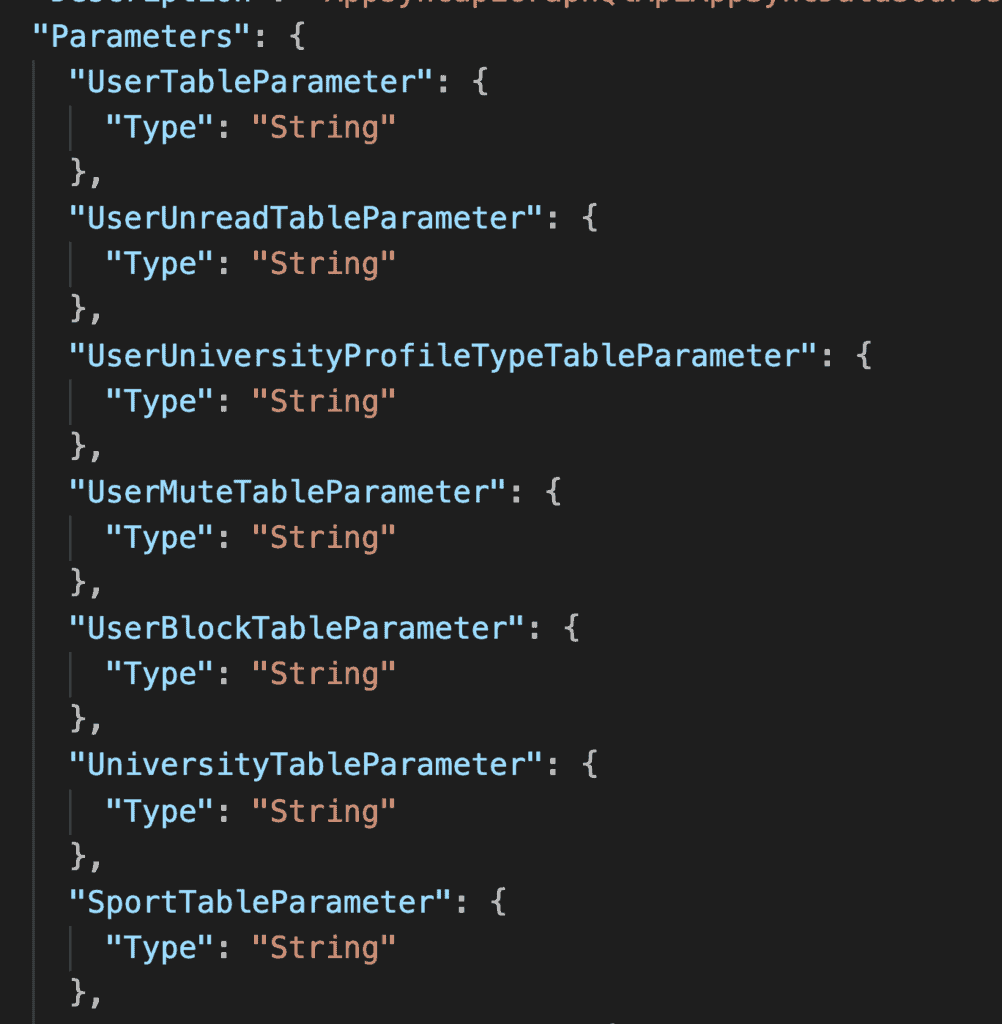 If the referenced resources are defined in the root stack, then they are passed into the nested stack as parameters. 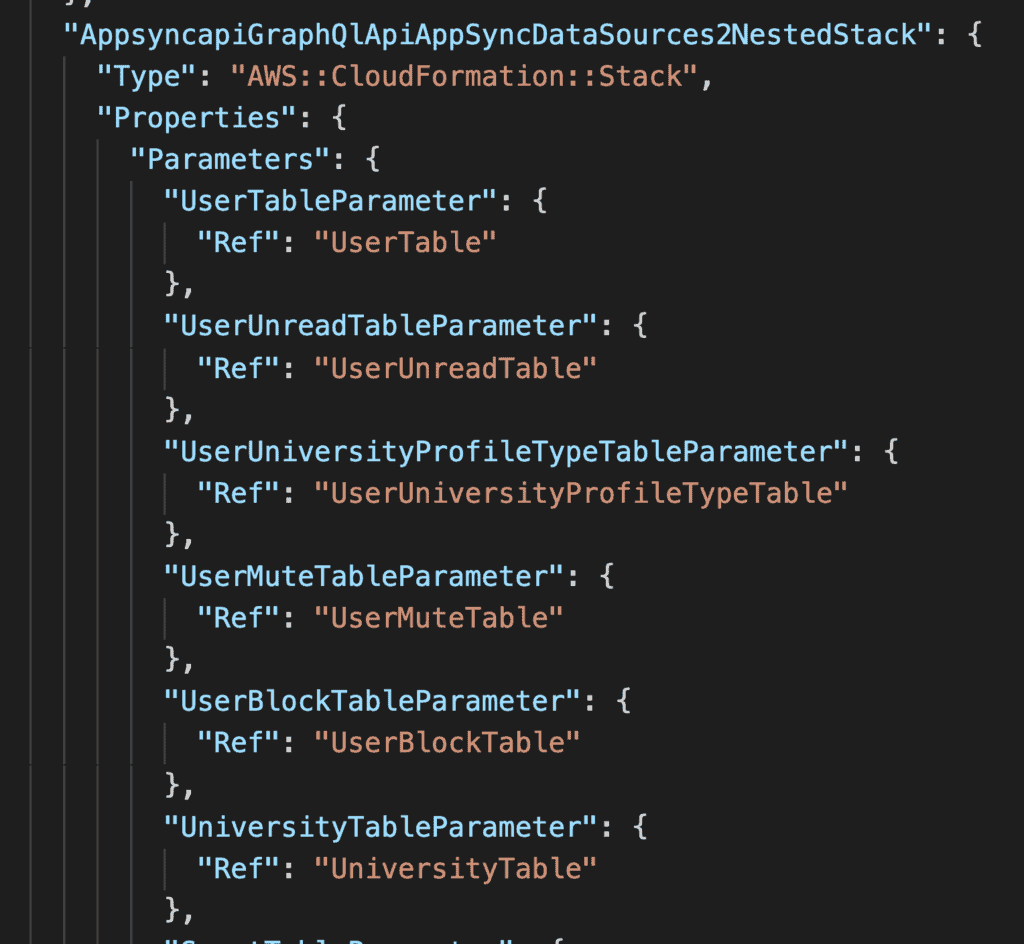 In the generated CloudFormation template, this is what it looks like. Here the root stack passes the output from one nested stack as a parameter to another.

The plugin has a number of built-in migration strategies – Per Lambda, Per Type and Per Lambda Group. 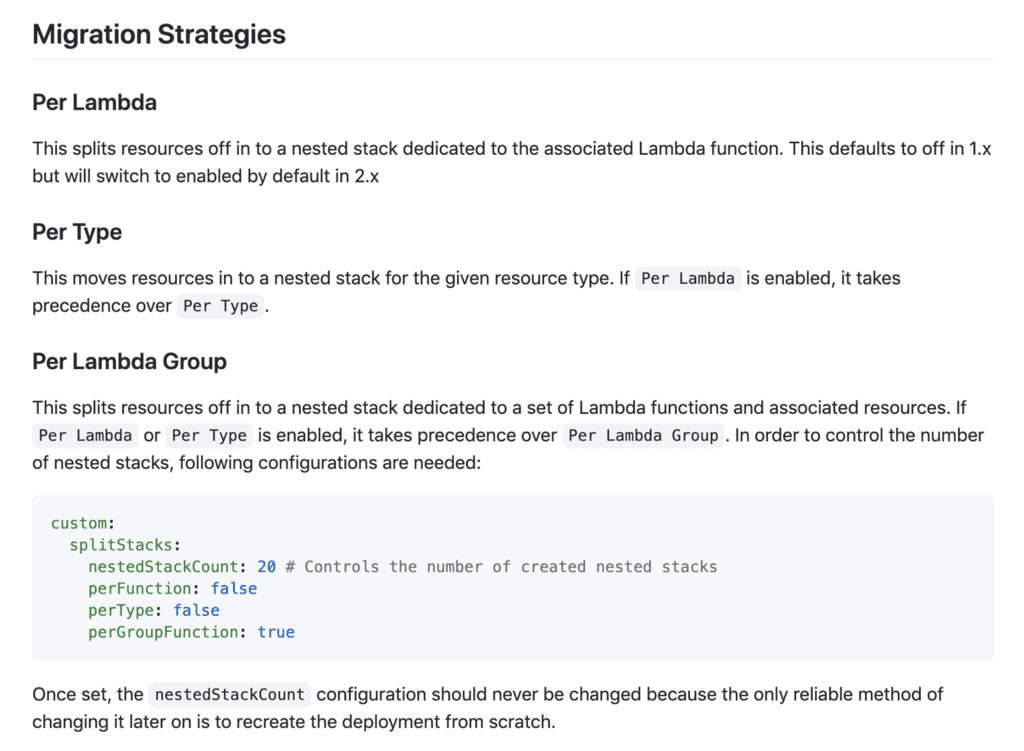 How you organize the resources into nested stacks is important. There are ample opportunities for circular references to happen.

This is especially true when you’re working with AppSync as there are quite a few different types of resources involved. For example, AWS::AppSync::DataSource references Lambda functions or DynamoDB tables, and also references the AWS::AppSync::GraphQLApi for ApiId. 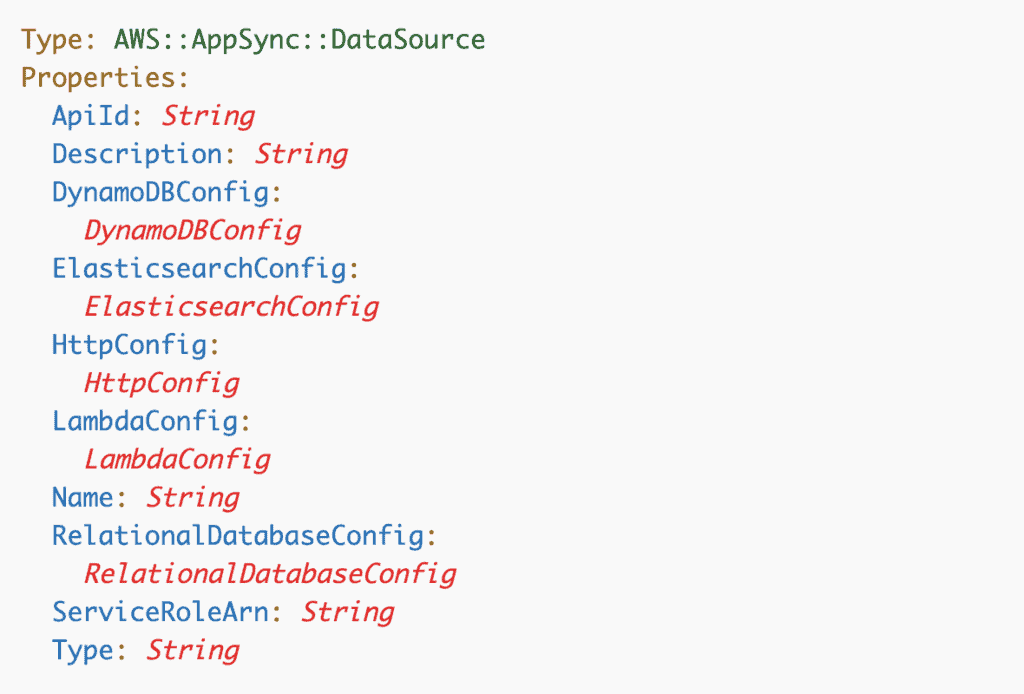 All and all, these are the resource types I have for the AppSync APIs. The arrows represent the direction of the reference. 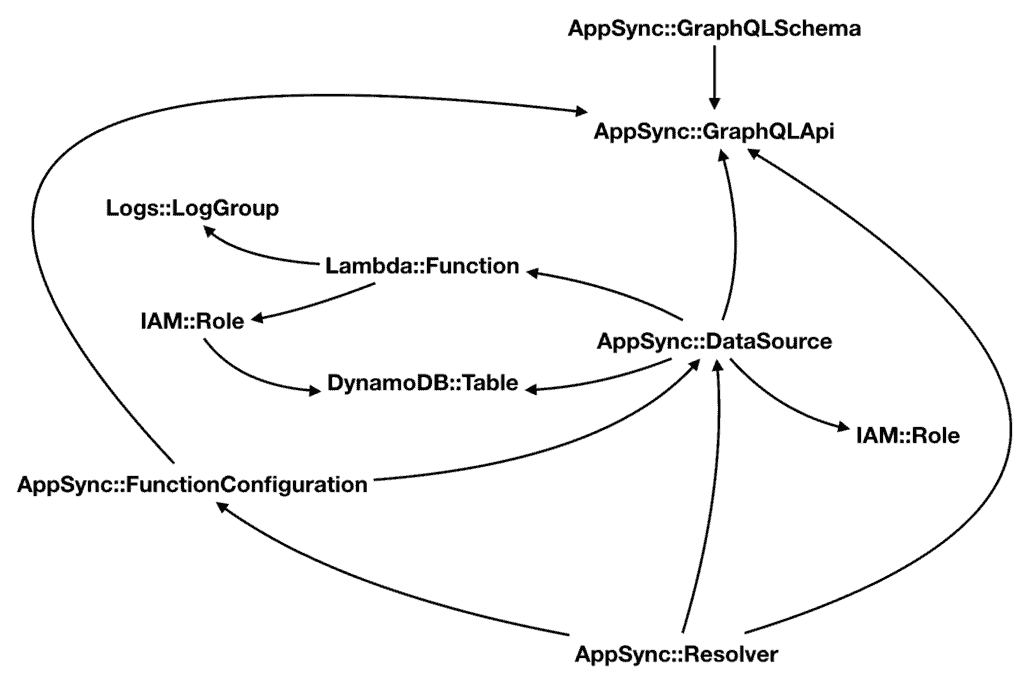 As the project grew, I had to get creative about how I group the resources into nested stacks. This post describes the 3 stages of that evolution.

As a first attempt, I sliced up the resources based on the AppSync API they belong to. The DynamoDB tables are kept in the root stack since they are shared by the two AppSync APIs. Other than that, all the other resources are moved into one of two nested stacks (one for each AppSync API). 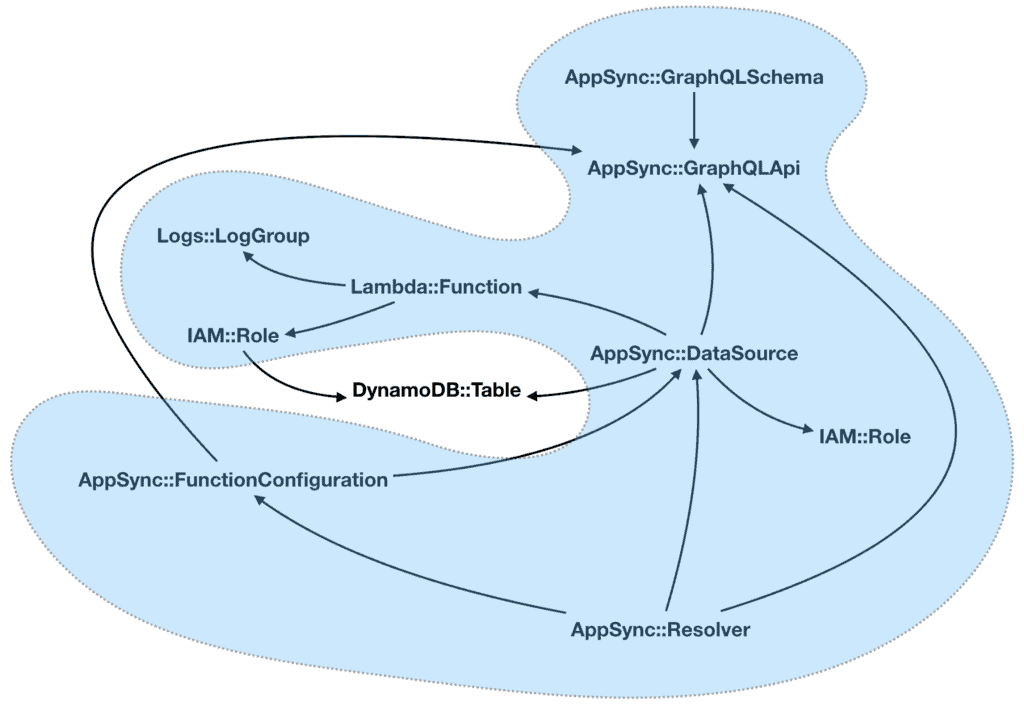 Additionally, the split-stacks plugin automatically puts the AWS::Lambda::Version resources into its own nested stack.

This was the simplest and safest approach I could think of. There was no chance for circular dependencies since the two nested stacks are independent of each other. Although they both reference the same DynamoDB tables in the root stack, there are no cross-references between themselves.

But as you can see from the screenshot above, there are a lot more resources in the AppSyncNestedStack than the AppSyncCmsNestedStack. Pretty soon, the nested stack for the AppSync API for the mobile app would grow too big.

The AppSyncNestedStack contains a lot of resources related to its Lambda functions. So the natural thing to do next was to move the Lambda function resources out into their own nested stack. 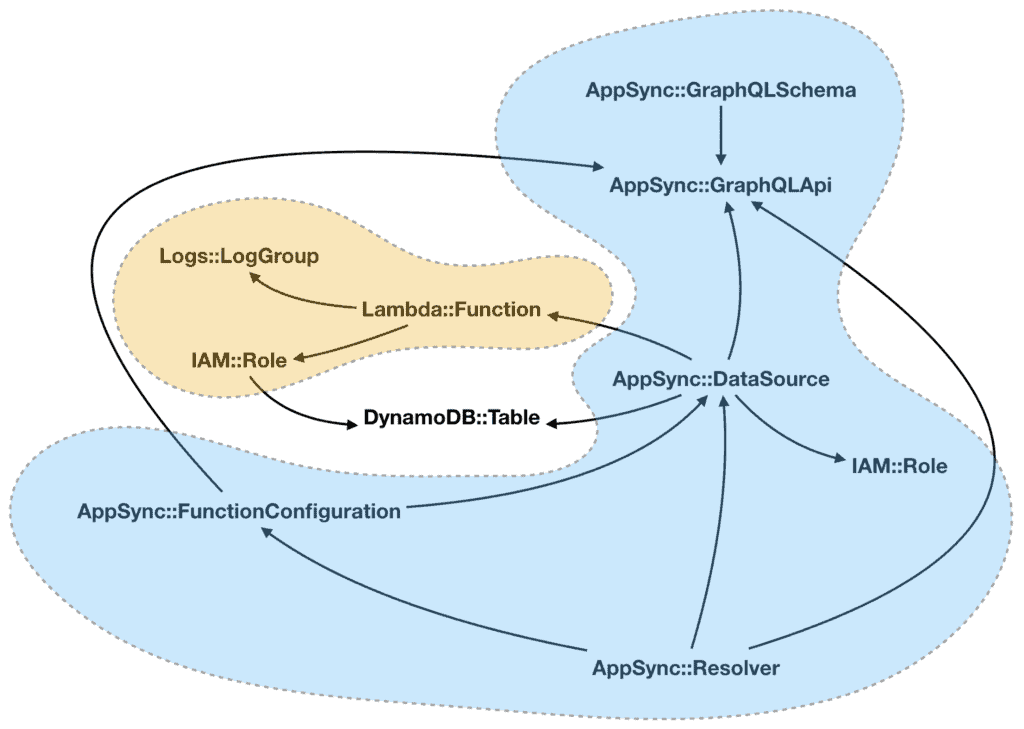 This made a big difference and allowed the project to grow much further. But soon, I hit another CloudFormation limit – a stack can have only 60 parameters and 60 outputs.

This was because the project now has over 60 Lambda functions. So the VersionsNestedStack had over 60 AWS::Lambda::Version resources, each requiring a reference to the corresponding AWS::Lambda::Function. Therefore, the stack had over 60 parameters, one for every function.

And so I also had to split the VersionsNestedStack in two.

This bought me time, but the project kept growing…

As the AppSync API for the mobile app approach 150 resolvers, the AppSyncNestedStack hit the 200 resources limit again.

From here on, I need to find a strategy that minimizes the number of cross-stack references so to not run foul of the 60 parameters limit per stack. Therefore, each nested stack needs to be as self-contained as possible.

Looking at the resource graph, I realised that the data sources are at the centre of everything. If I start from the data sources, I can create groups of resources that revolve around a single data source (the orange resources below) and are independent of other such groups. 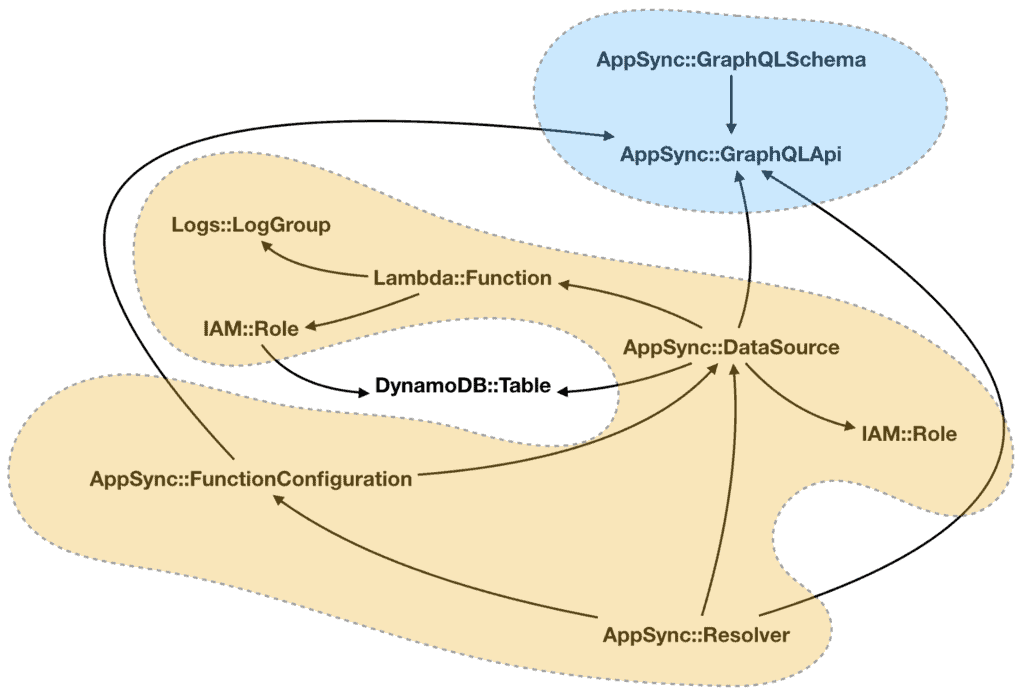 I can pack these mutually-independent groups into nested stacks. Since they don’t reference resources in another group, there’s no chance for circular references.

With this strategy, I am now able to split the resources into many more nested stacks. Compared to my earlier attempts, this approach is also very scalable. If need be, I can add as many nested stacks as I want (within reasons). 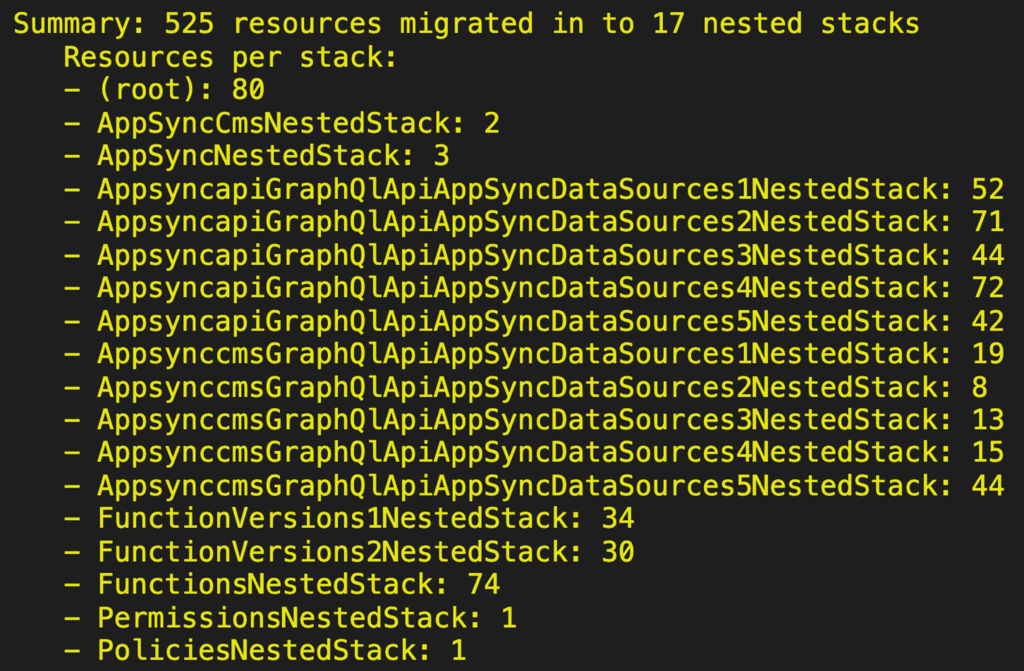 With this change, I was able to add another batch of resolvers to support a new feature.

As you move resources around, there are several things to keep in mind.

For instance, if a Lambda function is moved from one nested stack to another, then the deployment will likely fail because “A function with the same name already exists”. This race condition happens because the function’s new stack is deployed before its old stack is updated. The same problem happens with CloudWatch Log Groups as well as IAM roles.

To work around this problem, I add a random suffix to the names the Serverless framework generates for them.

Similarly, you will run into trouble if an AppSync resolver is moved from one nested stack to another. Because you can’t have more than one resolver with the same TypeName and FieldName.

Unfortunately, I haven’t found any way to work around this problem without requiring downtime – to delete existing resolvers, then deploy the new nested stacks. Instead, my strategy is to pin the resolvers to the same nested stack by:

If you can think of a better way to do this, then please let me know!

So that’s it on how I scaled an AppSync project to over 200 resolvers, hope you have found this useful!