The other day I put up a post with some quick bullet points about objects in javascript to help someone from a static, strongly typed language (like C# or Java) background understand javascript’s dynamic and loose type system. One important thing I haven’t talked about yet is the way inheritance work in javascript, which again, is very different from those found in C# or Java.

You can use functions, which themselves are objects to act as constructors and provide blueprints for creating objects:

The person object inherits all the members (properties and functions) that are defined by the constructor function above, as can be seen in Chrome’s debugger (CTRL+SHIFT+J):

Once defined, this new function will be available on all Person objects, even if they were created prior to the new function:

Understanding how members are looked up

This is all the code we have written so far:

If you run the code to the end, you will see the sayBye function we added at the end of the example:

It falls under the person object’s __proto__ member rather than on the object itself (as is the case for the constructor defined members – Name, Age and the sayHello function) but it’ll still be accessible directly on the person object.

In order for javascript to keep track of this chain and figure out where next to look for a member, an internal property __proto__ is used to point to the next object in the chain. Because every object is ultimately inherited from Object, it’ll be at the top of every object’s inheritance chain and the last object you’ll be able to fetch if you continuously invoke the __proto__ member before you get undefined returned:

Normally to extend an object you need to perform a two step process:

1. Invoke the base constructor

As you can see, this invokes the Person constructor function (see above) on the current object, if you try to create a new object using this constructor:

Notice anything missing? What happened to the sayBye function we added to the Person object outside of its constructor?

Well, because the sayBye function is not defined in the Person object’s constructor function and all we’ve done so far is to invoke that function to set up some properties and functions for a new Employee object so of course it won’t include anything that’s dynamically added to the object outside of its constructor function.

2. Set up the inheritance relationship

This second step is simple but crucial, this is how you set up the ‘relationship’ between the Person and Employee objects:

Doing this tells Javascript to use Person as the prototype for Employee, i.e. prototypal inheritance’s way of saying using Person as superclass to Employee. Now that you’ve done this step, if you try to create a new Employee object now this is what your object looks like: 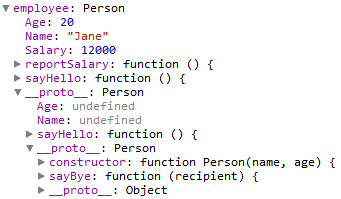 You can check if an object appear in another object’s inheritance chain using the isPrototypeOf function. For example, using the Person and Employee constructor functions (remember, they are objects) defined above:

Where the inheritance technique fails

Whilst the method of extending an object above works it does have an implicit requirement for the parent object’s constructor function to allow a parameterless constructor to work, which can be a problem in certain situations.

For instance, if the Person object’s constructor explicitly requires the parameters name and age to be specified:

Besides the technique I mentioned above, here are two other ways to create object inheritance for your reference.

In Douglas Crockford’s post here he wrote about a different technique on initializing objects, in his last update in 2008 this is his preferred method:

and to use it, suppose we have already created an Employee object called employee, to create another just like it:

This technique is more about cloning an existing object, employee2 will therefore inherit all of employee‘s current state:

MooTools is a modular Object-Oriented Javascript framework, it includes a Class constructor function which includes some nice features such as:

So using MooTools, this is how you can create the Person and Employee classes:

This is how the person and employee objects look in the Chrome Debugger: