raw_input always contains string, input can contain any object, even a calculation: 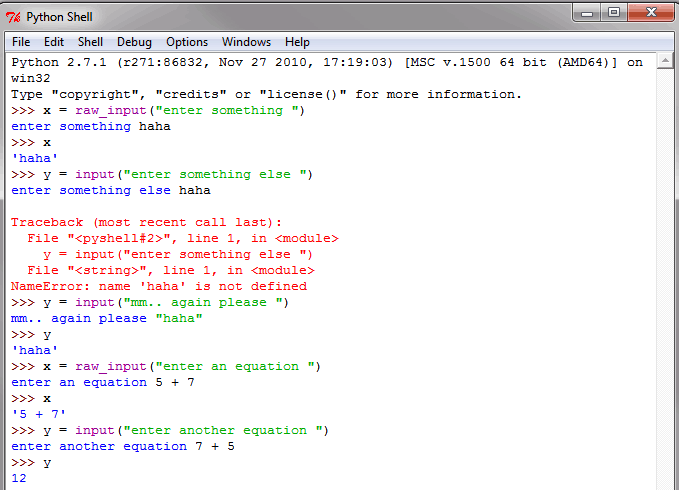 The is operator checks if two variables refers to the SAME object:

on the other hand:

The is not operator does the reverse.

The and and or logical operators, same as && and || in C# respectively. You can use the not operator to negate the outcome of a boolean comparison.

You may compare sequence objects of the same type, which uses lexicographical ordering – compare the first two, and if they differ then that’s the outcome of the comparison, else compare the next two, and so on:

Strings can use double or single quotes interchangeably:

Spanning across multiple lines – a backslash (\) as the last character on the line indicates that the next time is a logical continuation of this line:

or you can surround them in a pair of matching triple quotes: """ or ”’:

The repr function – the repr function returns a canonical string representation of the object, back-ticks (`) do the same thing (they are similar to the ToString() method on C#’s objects:

You can also use negative index, in which case it starts counting from the right:

you can also set up steps in the slicing:

similarly to before, you can slice backwards too:

Get length of string:

Finding substring (returns the index of the start of the first match):

Changing the case of strings:

Replacing portions of a string: