Fol­low­ing on from the last post, we will look at the Reflective style today.

We’re now officially at the halfway mark in this series, I hope you’ve enjoyed the series thus far and today’s style is a funky one!

In her example, Crista used Python’s metaprogramming capabilities to:

The metaprogramming capabilities of .Net languages have improved significantly since the availability of Roslyn and the F# compiler service, but it’s still nowhere near what one can easily do in Clojure, Ruby, Python and other dynamically typed languages.

First, we need to go and grab the F# Compiler Service package from Nuget.

Then, we need to reference it in our script and follow the tutorial on embedding the F# Interactive (FSI) in our application:

Once we have an instance of FsiEvaluationSession, we’re mostly interested in its EvalExpression method. Before we move on, let’s add another helper function to deal with its result:

Now we can start writing our code as strings, yay!

Couple of things I noticed whilst experimenting with the following:

which is why I used fully qualified names for System.IO.File.ReadAllText, and why it’s only used in composition and not directly invoked in the source code.

Instead, the code that’s captured in the string below will return an extractWords function with the signature

When we later evaluate it we’ll need to cast the result to that type and invoke the function with the paths to the stop words file and the input file for Pride and Prejudice. 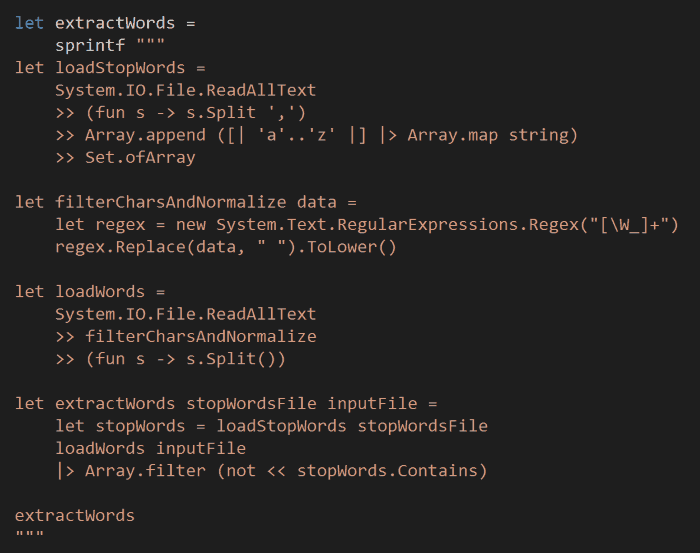 We’ll apply the same approach and create a piece of code that returns a function with the signature :

and another function that’ll take the word frequencies generated by the code above, sort them and print the top 25 results on screen:

Finally, all the pieces are in place.

Now, we can string everything together (pun intended) by:

You can find the source code for this exer­cise here.

1 thought on “Exercises in Programming Style–Reflective”