Following on from the last post, we will look at the Actors style today.

So without any delay, let’s get started!

F# has built-in support for the Actor Model via the MailboxProcessor type, and we’ll use it to represent each of the ‘things’ in our solution here.

First, we’ll create an actor to load and store the words that we need to process. Since MailboxProcessor is generic, we can define what messages it can receive with a DataStorageMessage union type that allows two kinds of messages:

In the snippet below, you can see that we have a recursive receive loop which asynchronously waits for message to arrive in its mailbox and handles them accordingly. One thing to note here is that, if a LoadWords message is received before all the loaded words are processed the current behaviour is to override the remaining words list. This can give you unexpected results, the current design leaves the responsibility of ensuring this doesn’t happen with higher level abstractions (see the controller actor below). 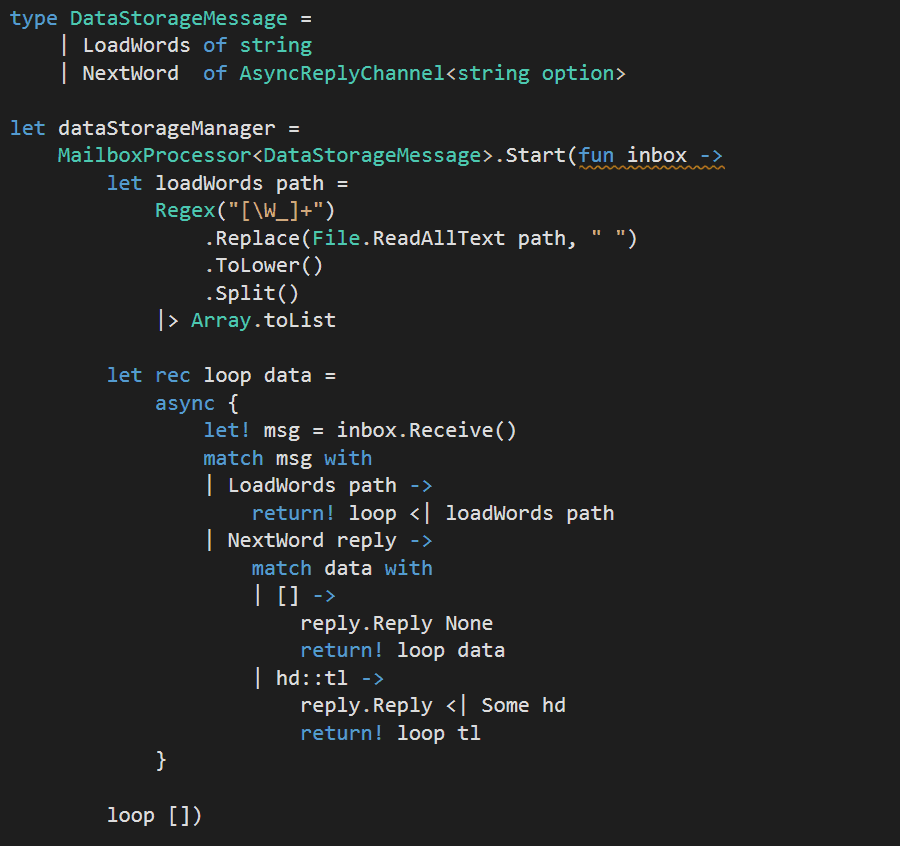 Next, we’ll add another actor to manage the stop words. Similar to the dataStorageManager, we’ll first define the messages that can be sent to our actor:

As we did in the dataStorageManager, whenever the stopWordsManager actor receives a LoadStopWords message it’ll replace the current list of stop words. All future words passed in via the IsStopWord message will be checked against the updated list of stop words. 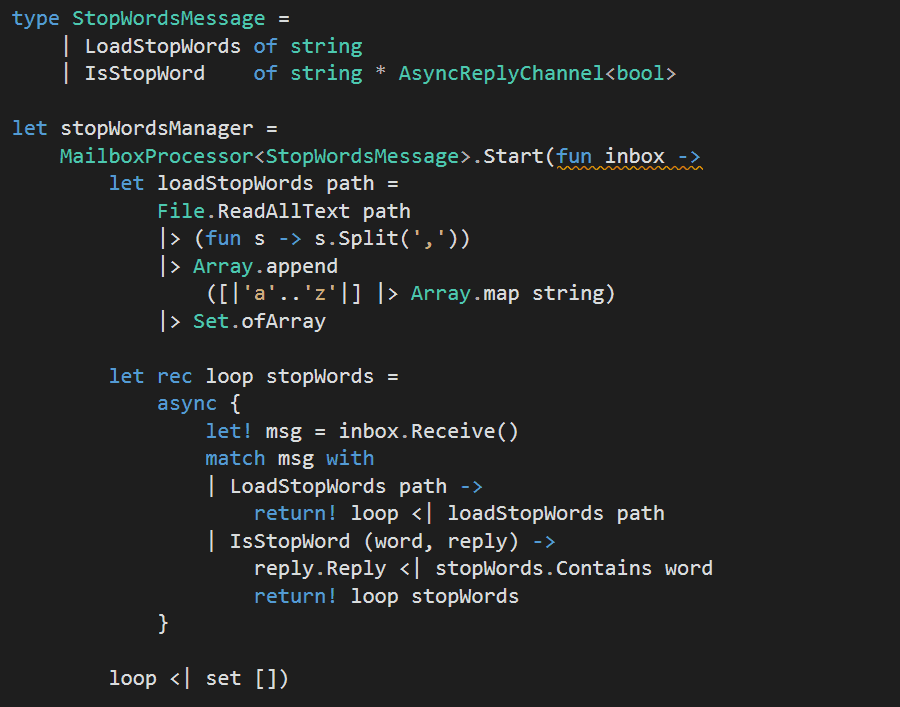 Next, we’ll add an actor to track the word frequencies. This actor can accept three messages:

Again, the code snippet below should be pretty straight forward, although there is actually a frailty here due to the use of Seq.take. One thing that often annoys me about Seq.take is that, unlike Enumerable.Take, it throws when there is insufficient number of elements in the sequence! In this case, if the calling agent ask for TopN too early or with a large N it’s possible to kill our actor (which is also something that we’re not handling here). It’s fine given the context of this exercise, but these are things that you need to consider when writing production-ready code. 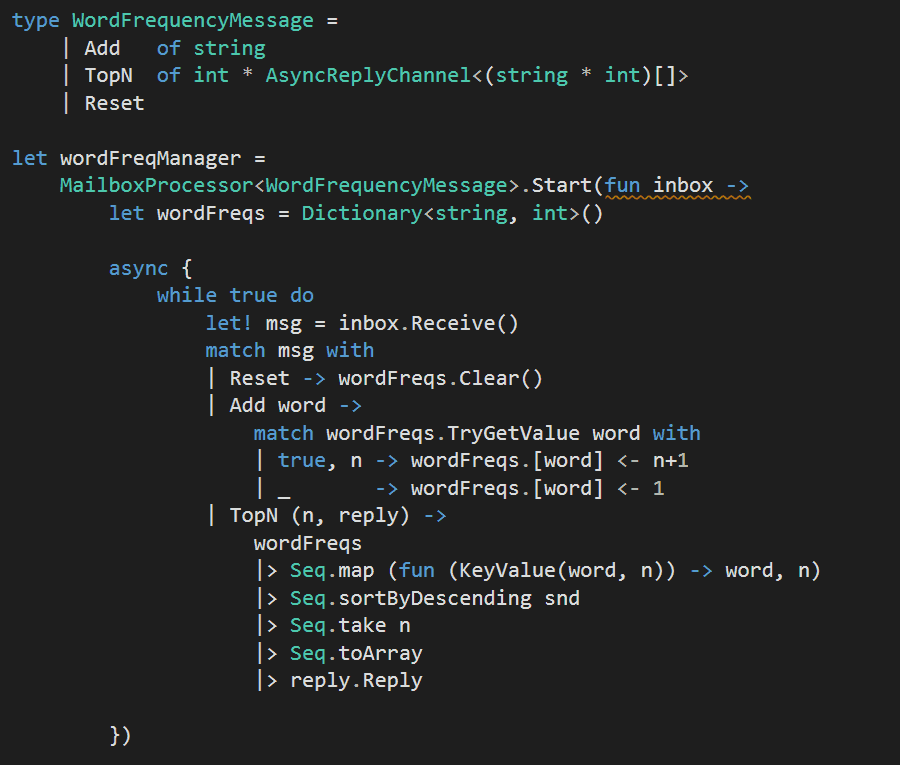 Lastly, we’ll add an actor to orchestrate the control flow of our program, that will accept a simple Run message. Here, I’ve added an AsyncReplyChannel<unit> to the Run message so that the caller has a deterministic way to know when the program has completed.

When the controller receives a Run message, it’ll initialize the other actors (which happens concurrently due to the asynchronous nature of messaging) and then process all the words from Pride and Prejudice by recursively fetch words from the dataStorageManager until there’s no more. One thing to note is that, because a MailboxProcessor process messages one-at-a-time, so even if the controller receives multiple Run messages at the same time it’ll still process them one at a time and we don’t even have to use locks! 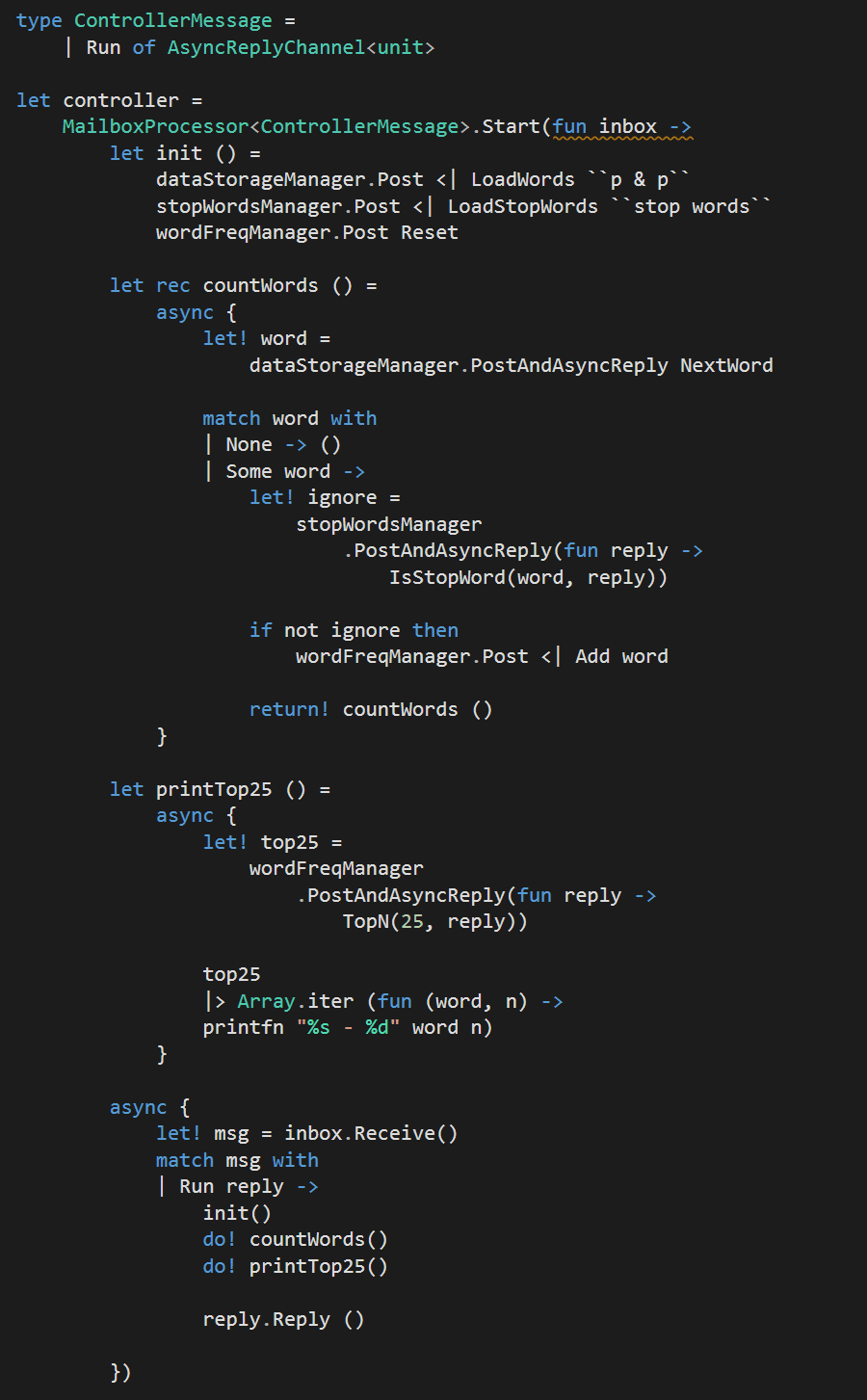 To run our program, we’ll kick things off by sending a Run message to the controller. I opted to run this synchronously, but you could just easily ignore the reply and run the program asynchronously with Async.Ignore and Async.Start.

If you haven’t already, please go ahead and watch this Channel9 recording of a conversation between Carl Hewitt and Erik Meijer on the Actor Model – what it is, and what it isn’t. I also did a write up to summarise the key points.

You can find the source code for this exercise here.

1 thought on “Exercises in Programming Style–Actors”