As you may have read about on numerous MVP’s blogs already, there’s an ongoing research project at Microsoft’s DevLabs called Reactive Extensions for .Net (Rx) which introduces a push-style duality (equal and opposite) of the traditional pull-style enumeration using Linq.

Erik Meijer gave a 30 mins introduction to the reactive framework in this video, I highly recommend that you sit through this to help you understand the basics of how Rx works. In summary, Rx introduces two main interfaces:

IObservable<T>, which represents a push-style collection

IObserver<T>, which supports push-style iteration over an observable sequence

Used together, they allow you to write programs which reacts to inputs from the environment as opposed to the traditional interactive program which asks the environment for input. 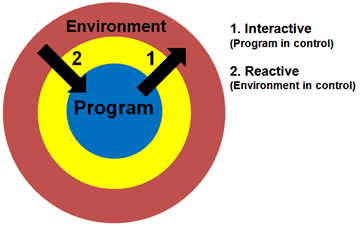 For a quick demo to show how you can implement a Drag-and-Drop feature in WPF with just a few lines of code, see this video on Channel9. Unfortunately, since the video was released, the API has changed somewhat (Observable.Context is gone for example), so below is a revised version which works with the latest API.

To get started, download the Rx extension for .Net 3.5 SP1 and start a new WPF application in Visual Studio 2008, add references to System.CoreEx and System.Reactive. In Windows1.xaml, replace the default Grid with:

and then in the code-behind, change the constructor to something like this:

This code might seem a little confusing, but just imagine how much code you’d have to write otherwise to implement Drag-and-Drop feature using the standard C# events and event handlers, and how messy and cluttered that code will will look if you did! So there’s definitely benefits to be had here, and therefore well worth the time and effort to learn more about the Rx :-)

Back to the example, let’s look a closer look at some of the methods used here to help you get a sense of what’s going on.

If you have an observable collection, xs:

You can subscribe to this collection with an IObserver, or alternatively you can use a handler as we did in the Drag-and-Drop example. You can actually provide three different handlers to an IObservable<T> collection:

In the example, q was the IObservable collection of an anonymous type we created to hold the changes in the X and Y positions between adjacent mouseMove events between a mouseDown and mouseUp event. WPF stipulates that changes to elements must be made on the owning thread, and the way to ensure our handlers run on the owning thread is to first call the ObserveOnDispatcher extension method so observers are asynchronously notified using the current dispatcher.

You should note that the Subscribe extension method actually returns an IDisposable. If you wish to unsubscribe from the observable collection, you need to call Dispose() on this IDisposable:

And finally, in this video, Wes Dyer outlined the four phases of execution in subscription:

The IObservable<T>.Zip extension method you see in the example above takes two streams and a function and returns a new stream. So let Xs and Ys be two streams of events which need to happen in pairs we can combine them into a new stream of events, Zs, which tells us when both Xs and its corresponding Ys has happened:

You should note that the order in which Xs and Ys happen does not matter in this case.

So back to the drag-and-drop example above, we used the Zip extension method to combine two streams:

– mm, which translates to mouseMove.StartWith(start).TakeUntil(mouseUp)

and returns a new stream of values:

4 thoughts on “Linq Over Events – Playing with the Rx Framework”