Recently I have come across some really interesting questions and debates around these two terms and how they differ from one another. There seems to be widespread confusions with many examples demonstrates one whilst intends another, and some simply uses the terms interchangeably.

Whilst admittedly not being a function programming expert, I’ve spent a bit of time scouring the web for information from those who are and I think I’ve finally come to understand the difference between the two!

In case you’re not familiar with what Currying and Partial Application means, here’s some quick definitions for you.

According to Wikipedia, currying is:

the technique of transforming a function that takes multiple arguments in such a way that it can be called as a chain of functions each with a single argument.

This means for a given function f, which takes three parameters x, y, and z and returns R:

once curried it becomes:

So to get the full application of the original function f, you need to call

With currying, parameters must be supplied from left to right starting from the left-most parameter.

the process of fixing a number of arguments to a function, producing another function of smaller arity.

This means for a given function f, which takes three parameters x, y, and z and returns R:

If you fix the first parameter x to 1 then you get another function g that takes two parameters and returns R:

Equally if you fix both x and y to values 1 and 2 respectively then you get another function h that takes one parameter and returns R:

At first glance the similarities are hard to miss, and one might be tempted to suggest (well, many have!) that they are two of the same thing or that one is simply a special case of the other. However, there are some crucial differences between the two which ultimately dictates their very different applications in practice. 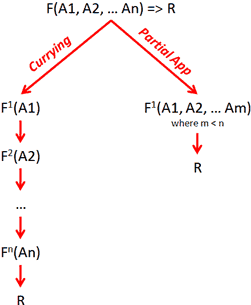 To help you understand the differences, try and ignore the fact that both Currying and Partial Application takes a function and returns a function with less input parameters and instead think about the function that’s returned (see image):

– when you curry a function F, you get back a chain of functions that returns another function at every stage, except the last function in the chain

– you still have to apply all the necessary parameters if you want to get the full application of the original function (i.e. R)

– when you partially apply a function F, you get back a function that allows you to get the full application (i.e. R) of the original function F with less parameters

– you don’t have to supply parameters in any particular order

So, the main difference between currying and partial application lies in the return type of the new function produced, let’s see how they differentiate in practice with a simple example in Javascript:

In general, both techniques produce reusable, helpful functions which fixes some parameters of the original function. For example, with Currying the function returned at each and every stage of the chain can be reused and potentially create a tree of functions:

I’m of the opinion that Partial Application has greater applications (not pun intended!) in solving real world problems. In fact, using Partial Application is something we’ve all done before – e.g. take a general purpose function which needs lots of parameters and make a more high level function out of it by fixing some parameters with sensible defaults:

Also, the fact that you don’t need to supply each and every parameters one at a time, in a particular order makes Partial Application easier to apply in practice. As much as one would love to stay ‘pure’, it’s simply far more pragmatic to repackage the original function signature and fix multiple parameters in one go!

1 thought on “Currying vs Partial Application”