Whilst talking with an ex-colleague, a question came up on how to implement the Stable Marriage problem using a message passing approach. Naturally, I wanted to answer that question with Erlang!

Let’s first dissect the problem and decide what processes we need and how they need to interact with one another.

The stable marriage problem is commonly stated as:

Given n men and n women, where each person has ranked all members of the opposite sex with a unique number between 1 and n in order of preference, marry the men and women together such that there are no two people of opposite sex who would both rather have each other than their current partners. If there are no such people, all the marriages are “stable”. (It is assumed that the participants are binary gendered and that marriages are not same-sex).

From the problem description, we can see that we need:

In terms of interaction between the different modules, I imagined something along the line of the following: 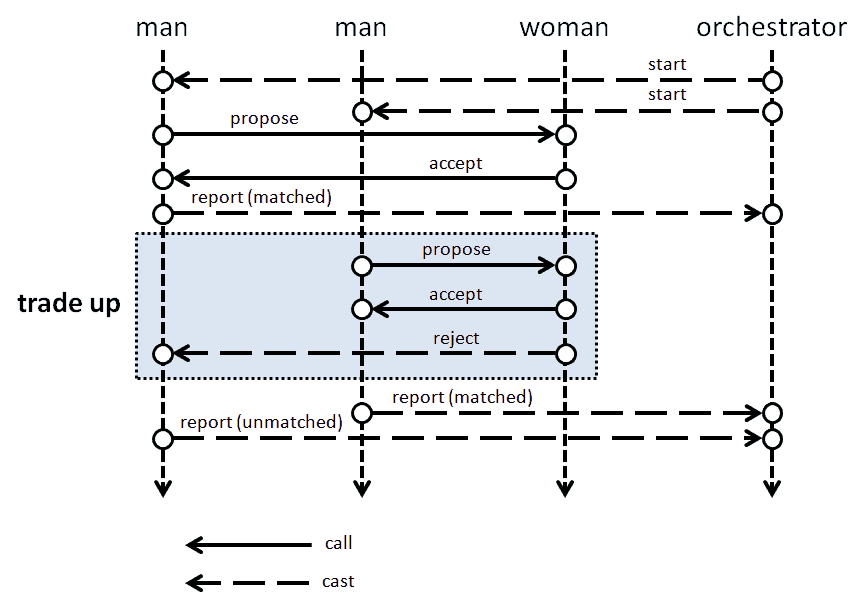 The proposal communication needs to be synchronous* as the man cannot proceed until he gets an answer for his proposal. But all other communications can be asynchronous.

In this case the communication still happens via asynchronous message passing, but the calling process asynchronously waits for a reply before moving on)

From here, the implementation itself is pretty straight forward.

And using the test data from Rosetta Code, you can have a module that sets up the test, which I’ve called stable_marriage here.

Compile and run the code gives the following output: 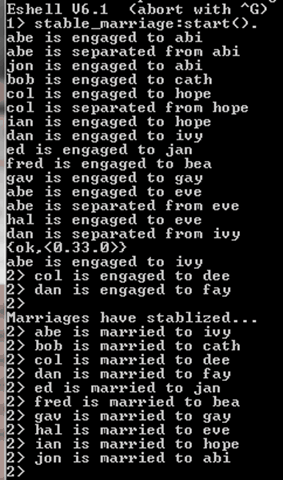 You can get the full source code for this solution on github.