Hi, welcome to another weekly update.

You are wrong about serverless vendor lock-in. In this guest post for Lumigo, I challenge the debate on serverless and vendor lock-in. First of all, technology choices create coupling and moving cost but you’re never truly locked in as the option is always there to rewrite the application. Technology choices, including the adoption of serverless technologies, carry both risks and rewards. Serverless technologies allow your organization to remain focused on creating values for your business and your customers. In the increasingly competitive world we live in, lack of focus is a far bigger risk to any organization compared to being tightly coupled to one cloud provider. And lastly, the whole vendor lock-in FUD seems to be driven by vested interests, who are not looking out for what is best for us as customers!

Why your business needs serverless. In this guest post for the Jefferson Frank, I break down how developers, managers as well as business stakeholders can all benefit from serverless. For developers, serverless technologies help us build more scalable and resilient systems and let us focus on customer needs. For managers, they help my team respond to business needs faster and more cost efficiently. They allow my team to have more ownership and autonomy and reduce the amount of inter-team dependencies. As a business stakeholder, they make it possible for me to understand the operational cost of each transaction. Which allows me to make informed decisions on pricing as well as where (and when) we should optimize the system to maximise return-on-investment.

CloudFormation protip: use !Sub instead of !Join. If you’re working with CloudFormation, then you should use !Join only when you need to perform string concatenation. In every other case, !Sub is a better choice.

Lambda and Kinesis, beware of hot streams. In this guest post for Lumigo, I examined whether or not the scalability issues with having too many Lambda subscribers to a single Kinesis stream has been resolved with enhanced fan-out. Compared to 2017, things have improved a lot but a series issue still remains. After about 15 subscriber functions, it becomes almost impossible to add new subscribers because the deployment itself fails consistently. To wrap up the post, we also considered some workarounds for this issue.

There were some big announcements from AWS regarding Lambda.

Node 10 is now supported on Lambda. But there are a couple of things to note: 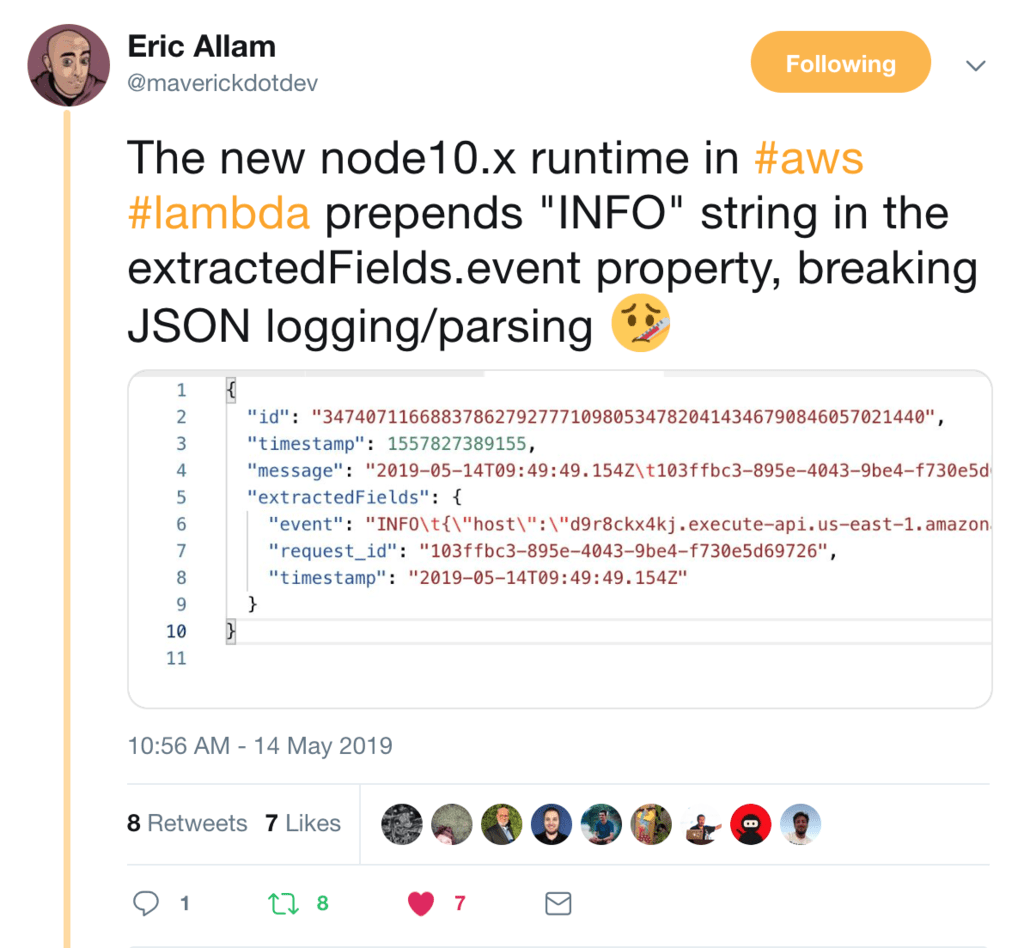 For more details about Node 10.x, read this good thread by Michael Hart from Bustle. Despite all the excitement, I think you should hold off upgrading to the Node 10.x runtime just yet. At least until some of these early bugs/issues are ironed out.

Updates to all existing functions

AWS is rolling out an update to the underlying OS (Amazon Linux 1) to all non-Node 10.x Lambda functions over the next month or so. This shouldn’t affect most functions, unless you depend on native bins that are compiled against the specific OS version. More details, including a recommended migration plan, is available here.

You can now specify additional auth modes for different GraphQL actions. So now you can use a combination of: