F# is statically typed, meaning that type checking is done at compile time.

F# supports the full set of primitive .Net types which are built into the F# language and separate from user-defined types.

Here’s a table of all the numeric types (both integer and floating-point) with their suffixes:

You can use standard arithmetic operators on numeric primitives, like other CLR-based languages, integer division rounds down to the next lowest number discarding the remainder. Here’s a table of all supported operators: 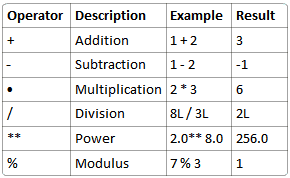 A very important to note here is that by default, these arithmetic operators do not check for overflow! If a number becomes too big for its type it’ll overflow to be negative, and vice versa: 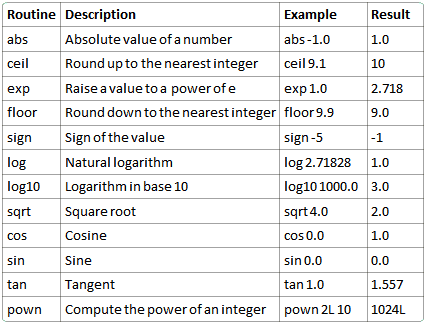 BigInt uses the I suffix for literals, see example below: 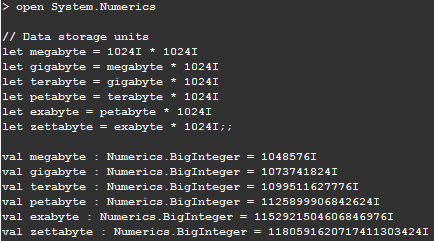 You should remember that although BigInt is heavily optimized, it is still much slower than using the primitive integer types.

The .Net platform is based on Unicode, so characters are represented using 2-byte UTF-16 characters. To define a character value, you can put any Unicode character in single quotes, for example:

Like C#, to represent special control characters you need to use an escape sequence from the table below: 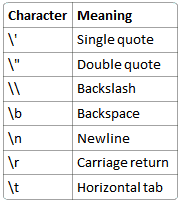 You can get the byte value of a character literal by adding a B suffix:

String literals are defined by enclosing a series of characters in double quotes which can span multiple lines. To access a character from within a string, use the indexer syntax, .[ ], and pass in a zero-based character index. For example: 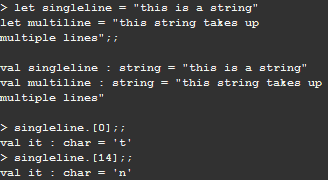 If you want to specify a long string, you can break it up across multiple lines using a single backslash, \, for example:

Like in C#, you can define a verbatim string using the @ symbol, which ignores any escape sequence characters:

F# has the bool type (System.Boolean) as well as standard Boolean operators listed below:

F# uses short-circuit evaluation when evaluating Boolean expressions, meaning that if a result can be determined after evaluating the first of the two expressions, the second value won’t be evaluated. For example:

true || f() – will evaluate to true without executing function f.

false && g() – will evaluate to false without executing function g.

You can compare numeric values using standard operators listed below: 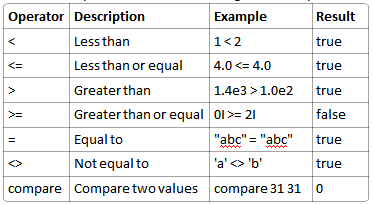 All these operators evaluate to a Boolean value except the compare function which returns -1, 0, or 1 depending on whether the first parameter is less than, equal to, or greater than the second.

You should have noticed that these operators are similar to those found in SQL Server and F# doesn’t distinguish assignment from equality (like C#, where = is assignment and == is equality comparison).

When it comes to equality, as in other CLR-based languages, it can mean different things – value equality or referential equality. For value types, equality means the values are identical. For reference types, equality is determined by overriding the System.Object method Equals.