Retry is to Repeat as Catch is to Concat

Ok ok, I know that’s not an exact quote, but I’m sure this is what he intended to say in the first instance :-P

Anyhow, the IObservable<T>.Retry method has all the same features of its Repeat sister method, in that:

1. You can invoke it as extension method:

or as static method:

2. If you don’t give it a count, it’ll retry indefinitely

3. xs.Retry(1) subscribes to xs only once, and xs.Retry(0) will not subscribe to xs at all.

Only this time, the repetition of the observable collection only happens on exception. So, if you take the illustration from the previous post and swap the colours around and you will arrive at a pretty accurate illustration of how Retry works: 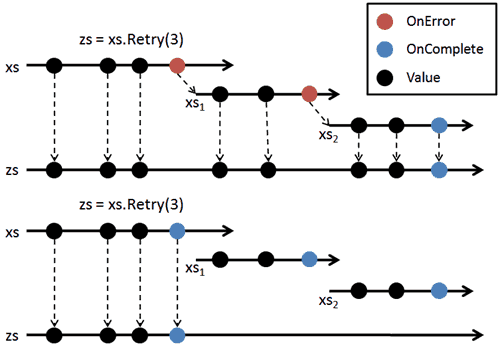