Having run into a bit of deadlocking issue while working on Bingo.Net I spent a bit of time reading into the Producer-Consumer pattern and here’s what I learnt which I hope you’ll find useful too.

To start off, MSDN has an introductory article on how to synchronize a producer and a consumer thread. It’s a decent starting point, however, as some of the comments pointed out the sample code is buggy and allows for a race condition to happen when the AutoResetEvent is reset in quick succession whilst the consumer thread is processing the previous reset.

The problem with the AutoResetEvent is that you can set an event that is already set which does not have any effect: 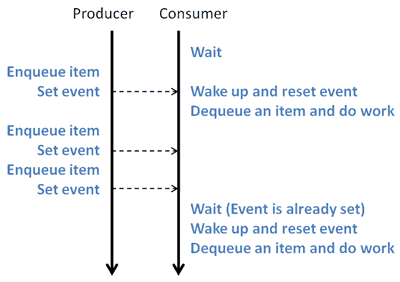 And just like that, the Consumer has missed one of the items! However, you can work around this easily enough by locking onto the queue’s sync root object when it wakes up and dequeue as many item as there are on the queue. This might not always be applicable to your requirement though.

A much better choice would be to use the Monitor class instead.

As Jon Skeet pointed out in his Threading article (see reference) the Auto/ManualResetEvent and Mutex classes are significantly slower than Monitor.

Using the Monitor.Wait, Monitor.Pulse and Monitor.PulseAll methods, you can allow multiple threads to communicate with each other similar to the way the reset events work but only safer. I have found quite a number of different implementations of the Producer-Consumer pattern using these two methods, see the references section for details.

Whilst the implementations might differ and depending on the situation sometimes you might want multi-producer/consumer support and other times you might want to ensure there can only be one producer/consumer. Whatever your requirement might be, the general idea is that both producer(s) and consumer(s) have to acquire a lock on the same sync object before they can add or remove items from the queue. And depending on who’s holding the lock:

There are a number of other considerations you should take into account, such as the exit conditions of the consumer’s continuous loop, etc. Have a look at the different implementations I have included in the reference section to get a feel of what you need to do to implement the Producer-Consumer pattern to suit your needs.

Another thing which you should be aware of when implementing any sort of Producer-Consumer model is the need to make the queue thread-safe seeing as multiple threads can be reading/writing to it concurrently. As you might know already, there is a Queue.Synchronized method which you can use to get a synchronized (in other words, thread-safe) version of the queue object.

But as discussed on the BCL Team Blog (see reference), the synchronized wrapper pattern gave developers a false sense of security and led some Microsoft developers to write unsafe code like this:

Which is why they decided it’s better to force developers to use explicit lock statement around the whole operation.

Another way to think about the problem is to picture the Queue.Synchronized method as the equivalent of a volatile modifier for a reference type which guarantees the latest value of the instance (as opposed to the reference pointer only). Which means it’s save to use in atomic operations (a single instruction) but does not stop interleaving instructions from multiple threads between operations.

BCL Team Blog post on why there is not Queue<T>.Synchronized

StackOverflow question on why there’s no Queue<T>.Synchronized