Whilst working on Bingo.Net I have come across a number of concurrency issues which must be fairly common in synchronous multiplayer games. During my attempts to overcome these obstacles I came across the volatile modifier in C# which at first glance looked like a silverbullet for all concurrency problems, but under closer inspection it more closely resembles a false dawn and is catered for a far more cornered use case…

Before we start, let’s first take a look at the definition of the volatile modifier on MSDN:

Fields that are declared volatile are not subject to compiler optimizations that assume access by a single thread. This ensures that the most up-to-date value is present in the field at all times.

In other words, by simply marking a field with the volatile keyword, we can be sure that we will always get the latest value of that field wherever we ask for it! Sounds too good to be true? That’s because it is.

The true face of the volatile modifier

Whilst MSDN’s definition is correct it’s certainly misleading. What the volatile modifier gives you is protection against concurrency issues arising from multiple threads executing on multiple CPUs caching data and re-ordering instructions. Now let’s take a closer look at each case:

As Jon Skeet pointed out in his article (see references section), memory in modern computers is complex, with multiple levels of caching, processor registers and multiple processors sharing main memory but possibly not caches, etc. A processor might cache a piece of data from the main memory and use the cached data in the execution of a thread, modify it, and only update the main memory at a later time. During which time another thread running concurrently on another CPU might have read the same bit of data from main memory and used the outdated version of the data, i.e.: 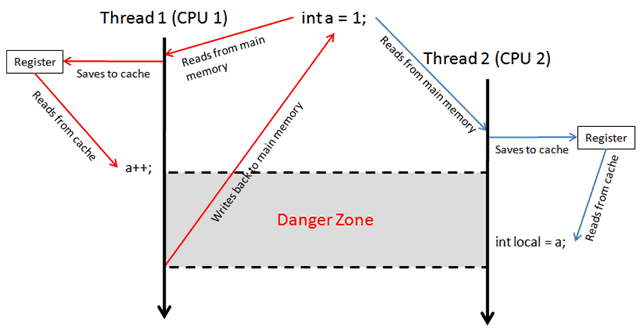 Marking a field as volatile would make sure that it is not cached during the execution of a thread.

The .NET compiler is allowed to alter the order of reads and writes in any way which does not change the meaning of the original program. For example, as pointed out in Dr Dobb’s articled (see reference section) it’s legal for the compiler to transform:

This is legal because the semantic of the original program is preserved. SImilarly:

This reordering is also legal according to the rules of the compiler. However, it’s easy to see how this can be a problem in a multi-threaded environment where another thread is writing to a concurrently.

It’s easy to be lured into a false sense of security by the volatile keyword and think that if you’re guarantee the latest value of a field you won’t need to use lock anymore. Marking a field as volatile doesn’t prevent multiple threads from interleaving , take this code for example:

Also, although you’re able to use the volatile modified on reference types, only the reference (which is a 32-bit integer pointing to a location in memory) itself is volatile but not the instance values. For example, you can’t use volatile on a double because it’s 64-bit and therefore read/write operations cannot be performed atomically (in a single instruction), but you can still make a wrapper class volatile:

In this case, although you’re guaranteed the latest version of the reference pointer _volatileDouble, you’re not guaranteed the latest value of the Double property of the instance. To get around this, you will need to make the VolatileDouble type immutable so the value of its Double property cannot be changed without creating a new instance and updating the reference point _volatileDouble. However, in situations like this, it’s usually better and easier to use Interlocked.Read and Interlocked.Exchange in conjunction with BitConverter.Int64BitsToDouble and BitConverter.DoubleToInt64Bits instead.

Though the volatile modifier might not be the all-conquering solution to concurrency, the point to take away from here is that although code like this works most of the time:

it’s not guaranteed to work, and we shouldn’t rely on the right combination of compiler, runtime, JIT, the CPU and the platform to ensure the correct running of our application. This is where the volatile modifier can help.

Also, the volatile modifier can help you achieve thread-safety in some situations. Unlike the bit of unsafe code I showed earlier, where you’re modifying the value of a field based on what it is right now, which requires you to lock around it. (and everywhere else you’re using the same field!) If all you want to do is do a check against a field and then perform an action which does not require using the field again then you can get away with just making it volatile:

StackOverflow question on volatile vs Interlocked vs lock

MSDN article on the volatile modifier

6 thoughts on “Threading – understanding the volatile modifier in C#”