To find the answer to this question I put together a very simple test, but before we go into it..

Disclaimer: this test and its result should be taken at face value only, it is intended to illustrate that posting messages to an agent is super lightweight, but in a real world application there will be many other constraints and considerations (such as latency, etc.) that should be taken into account before you decide to use F# agent instead of other alternatives.

So, back to the test itself, here’s the test code: 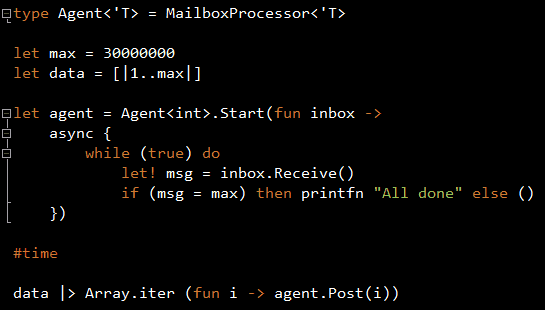 the line that posts 30 million messages (4 byte integers in this case) to the agent returned in 0.983 second, but the agent actually took just over 12 seconds to receive and process all the messages.

However, processing of those messages takes significantly longer, and if the backlog continues to build then eventually you will be hit with an OutOfMemoryException. Also, if you’re depending on a sync/async reply from the agent, latency can also be a big problem if the agent is allowed to build up a huge backlog of messages. Keep these in mind when you’re designing your application around F#’s agents.

Finally, for the question of ‘how many messages can you post to a F# agent in one second?’, on my Corei7 3.3GHz, the answer is a cool 30 million

6 thoughts on “F# – How many messages can you post to a F# agent in one second?”