In my previous post I mentioned some of the shortcomings with Amazon SimpleWorkflow (SWF) which drove me to create an extension library on top of the standard .Net SDK to make it easier to model workflows and business processes using SWF.

In this series of blog posts I’ll give you more examples of how to use the library to model workflows to be executed against the SWF service to take advantage of the reliable state management and task dispatch it offers, but none of the plumbing and boilerplate code you would have to deal with using the SDK.

Before we start looking at examples, let’s have a quick recap of the SWF terminologies:

These are the most common concepts/components you’ll see in SWF, but there are also less commonly used (in my opinion at least) features such as:

Consider a workflow where there is only one activity, which simply prints the input to the screen and echoes it back out.

In its essence, you can think of an activity as nothing more than a function which accepts a string as argument and return a string, i.e. a fun with signature string –> string in F#.

With the standard .Net SDK you will need to write a decider for each workflow in order to provide the orchestration you need for that workflow. The decider logic tends to quickly become difficult to understand and maintain when the decision logic becomes more complicated, e.g. when multiple activities and child workflows are scheduled in parallel ,and you need to retry/fail activities/workflows, etc.

In my view, the decider is largely plumbing that developers should do without, so with the extensions library you should not need to write any custom decider code but instead, simply declare what activities and/or child workflows should be scheduled at each stage of a workflow and let the library do all the heavy lifting for you!

As far as workflow modelling is concerned, the only thing you need to do is use the custom ++> operator (inspired by Dave Thomas’s pipelets project) to attach additional steps to your workflow. So the above workflow can be modelled as:

and that’s it! No need to register the workflow and activity and write bespoke decider & activity worker yourself, the library does all of that for you, all you needed to do was to model the workflow you want.

Notice you haven’t had to provide any reference to SWF at all thus far, in fact, you only need to provide an instance of AmazonSimpleWorkflowClient (from the AWS SDK) when you start the workflow:

This way, it’s possible to run the workflow across multiple accounts simultaneously (dev, staging, prod, etc.) by calling the Start method with each of the client instances (one for each account), which fits well with the mobile worker model SWF is designed with – SWF holds the state but you can run your workers from anywhere in and out of the AWS ecosystem.

Once you’ve started the workflow, the library will automatically register the domain, workflow and activity for you if they are not present already. You can verify this by looking in the SWF Management Console:

Notice that whilst we didn’t specify the “echo” activity with a version number, it’s registered with “echo.0”? I’ll go into more details on the versioning scheme in a later post, but for now let’s just be glad that we didn’t have to register these by hand!

Next, you can start a workflow directly from the management console, but ticking against the workflow you want to start and clicking the “Start New Execution” button:

Let’s follow through with the dialogue box and set the input as Hello World! as below: 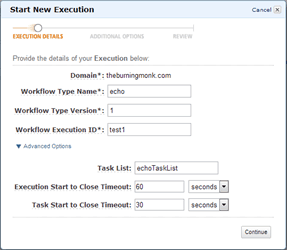 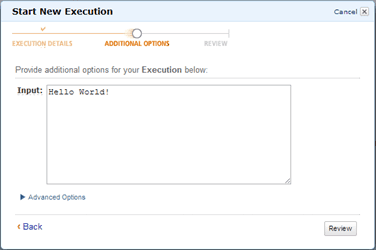 Once you start the workflow execution you will see Hello World! being printed in the console:

This is a sign that our echo function (which is invoked by the generated activity worker) had been called.

Back in the SWF Management Console, if you look under Workflow Executions, you should see the execution is closed after having completed successfully: 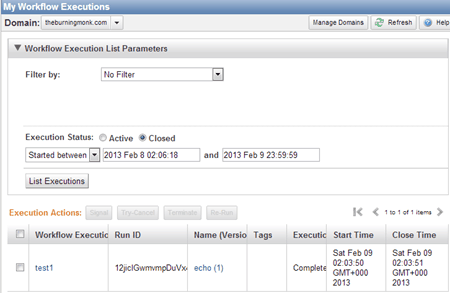 Clicking on the workflow execution ID allows you to see the sequence of events which had been recorded for this execution: 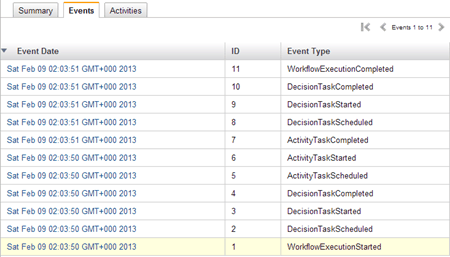 If you switch to the Activities tab, you’ll get a more condensed view with just the activities that were scheduled, along with their inputs, results, etc.

For now, ignore the JSON string in the Control field and the format of the Activity ID, these are both automatically generated by the library based on a set of conventions and will be covered by a later post.

So that’s it! I hope you can see that this extension library gives you a powerful way to express and model a workflow and focus your development efforts on the things that count (designing the process and writing the code that does the actual work) rather than wasting precious developer time on getting your code to work with SWF!

For Java developers, there is an existing high-level framework (provided by Amazon itself) for working with SWF called the Flow Framework, which adapts a more object-oriented approach and in my opinion requires far more plumbing and most importantly does not