Amazon SimpleWorkflow (abbreviated to SWF from here on) is a workflow service provided by Amazon which allows you to model business processes as workflows using a task based programming model. The service provides reliable task dispatch and state management so that you can focus on developing ‘workers’ to perform the tasks that are required to move the execution of a workflow along.

For more information about SWF, have a look at the following introductory webinar.

There are two types of tasks:

Both the activity worker and decider needs to poll SWF service for tasks and respond with some result or decisions respectively after receiving a task. Each task is associated with one or more timeout values and if no response is received before the timeout expires then the task will timeout and can be rescheduled (in the case of a decision task, it is rescheduled automatically by the system).

Since tasks can be polled from just about anywhere (from an EC2 instance, or your home computer/laptop) and the tasks received can be part of any number of currently executing workflows, both the activity worker and decider should be completely stateless and can be distributed across any number of locations both inside and outside of the AWS ecosystem.

The history (as a sequence of events each keyed to a unique ID) of each workflow execution is available to view in the AWS Management Console so that you have plenty of information to aid you when investigating why workflows failed, for instance. 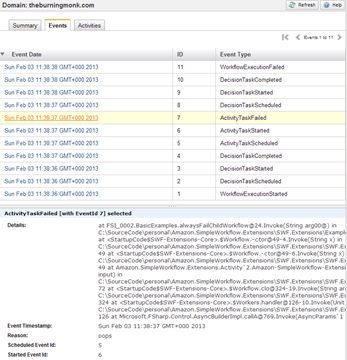 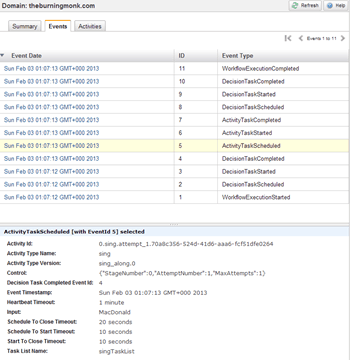 Consider the following example given by the SWF developer guide:

Each of the steps can be represented as an activity task and along the way the decider will receive decision tasks and by inspecting the history of events thus far the decider can schedule the next activity in the workflow, e.g.

The actual SWF API is rather different so the pseudo code above tends to translate to something slightly more involved, which brings us to the topic of..

In my opinion the biggest shortcoming with SWF is that the workflow itself (an order sequence of activities) is implied by the decider logic and at no point as you work with the service does it feel like you’re actually modelling a workflow. This might not be an issue in simple cases, but as you string together more and more activities (and potentially child workflows) and having to pass data along from one activity to the next and deal with failure cases the decider logic is going to become much more complex and difficult to maintain.

The .Net AWSSDK provides a straight mapping to the set of actions available on the SWF service and provides very little added value to developers because as it stands every workflow requires boilerplate code to:

Many of these steps are common across all deciders and activity workers and it’s left to you to implement this missing layer of abstraction. Java developers have access of a heavy-weight Flow Framework which allows you to declaratively (using decorators) specify activities and workflows, giving you more of a sense of modelling the workflow and its constituent activities. However, as you can see from the canonical ‘hello world’ example, a lot of code is required to carry out even a simple workflow, not to mention the various framework concepts one would have to learn..

All activity and workflow types must be registered

Every workflow and every activity needs to be explicitly registered with SWF before they can be executed, and like workflow executions, registered workflow and activity types can be viewed directly in the AWS Management Console: 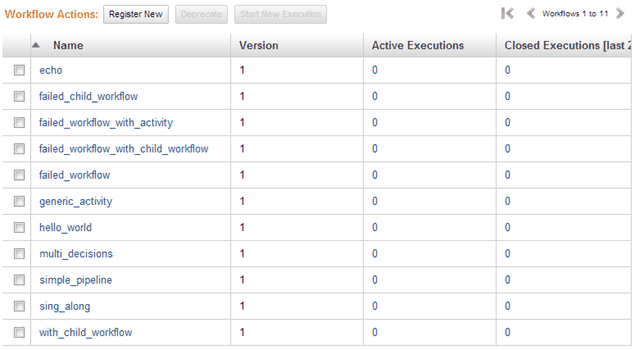 This registration can be done programmatically (as is the case with the Flow Framework) or via the AWS Management Console. The programmatic approach is clearly preferred but again, as far as .Net developers are concerned, it’s an automation step which you’d have to implement yourself and derive a versioning scheme for both workflows and activities. As a developer who just wants to model and implement a workflow with SWF, the registration represents another step in the development process which you would rather do without.

Another thing to keep in mind is that, in the case where you have more than one activity with the same name but part of different workflows and require different task to be performed, you need a way to distinguish between the different activities so that the corresponding activity workers do not pick up the incorrect task.

Driven by the pain of developing against SWF because of its numerous shortcomings (pain-driven development…) I started working on an extension library to the .Net AWSSDK to give .Net developers an intuitive API to model workflows and handle all the necessary boilerplate tasks (such as exception handling, etc.) so that you can truly focus on modelling workflows and not worry about all the other plumbing required for working with SWF.

The simple ‘hello world’ example given by the Flow Framework can be modelled with less than 10 lines of code that are far easier to understand:

Here the ++> operator attaches an activity or child workflow to an existing empty workflow and returns a new instance of Workflow rather than modifying the existing workflow (in the spirit of functional programming and immutability).

An activity in SWF terms, in essence can be thought of a function which takes an input (string), performs some task and returns a result (string). Hence the Activity class you see above accepts a function of the signature string –> string though there is a generic variant Activity<TInput, TOutput> which takes a function of signature TInput –> TOutput and uses ServiceStack.Text JSON serializer (the fastest JSON serializer for .Net) to marshal data to and from string.

Starting a workflow execution with the input ‘theburningmonk’ prints the following outputs to the console:

Old MacDonald had a farm

To visualize the sequence of event and how data is exchanged from one activity to the next:

-> “theburningmonk” is passed as input to the activity “greet”

-> “theburningmonk” is passed as input to activity “bye”

-> “MacDonald” is used as input to start the child workflow “sing_along”

-> “MacDonald” is passed as input to the activity “sing”

-> sing function prints “Old MacDonald had a farm” to console

You can optionally specify the max number of attempts (e.g. max 3 attempts = original attempt + 2 retries) that should be made for each activity or child workflow before letting it fail/timeout and fail the workflow.

The domain, workflow and activity types are all registered automatically (if they haven’t been registered already) when you start a workflow. You might notice that you don’t need to specify a version for each of the activities, this is because there is an convention-based versioning scheme in place (see below).

Deriving a versioning scheme for your activities is at best an arbitrary decision and one that is required by SWF which adds friction to the development process without adding much value to the developers.

This scheme allows you to:

Nearly all of the communication with SWF (polling, responding with result, etc.) are all done asynchronously using non-blocking IO (using F# async workflows).

Currently, the extension library can also be used from F#, I’m still undecided on the API for C# (because you won’t be able to use the ++> custom operator) and would welcome any suggestions you might have!

As you can see from the Issues list, there is still a couple of things I want to add support for, but you should be seeing a Nuget package being made available in the near future. But if you want to try it out in the meantime, feel free to grab the source and run the various examples I had added in the ExampleFs project.

7 thoughts on “Making Amazon SimpleWorkflow simpler to work with”