First of all I’d like to offer my sincere apologies to those who have asked me to update my benchmark numbers following the release of Json.NET 5.0.6, it took me a long time to clear some of my backlogs and only just got around to it, sorry for the waiting!

The good news is that, based on my tests against a simple POCO object (that’s representative of the payload that I work with often) Json.NET has delivered on its promised and offered big improvements on deserialization performance and is now neck-to-neck with ServiceStack.Text in terms of deserialization speed.

You can use the simple test harness I created and see this example code for my JSON serializer tests to benchmark against your particular payload.

Here is the result against the latest versions of JSON serializers at the time of writing: 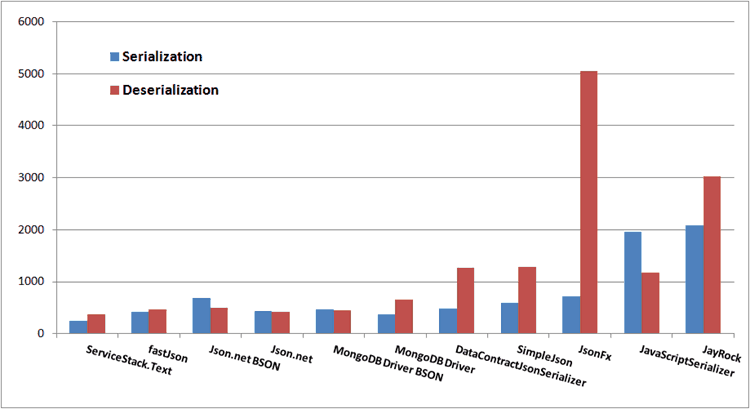 As mentioned previously, the latest version of Json.Net has made big improvements on its deserialization speed and is now on par with ServiceStack.Text.

As you can see, there is little to choose between the usual suspects of protobuf-net, MessagePack and MessageShark, who are well clear of the rest of the pack. I have also included two additional binary serializers:

Code for the JSON benchmarks

Code for the binary benchmarks