I stumbled across this little gem the other day – websocketd – which turns anything that takes standard-in and standard-out into a websocket server!

To build a dead simple echo server, follow these steps:

Since we enabled the dev console with the devconsole flag we can now go to http://localhost:8080 in the browser and test out our echo websocket server interactively: 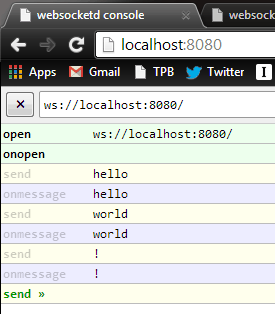 One thing to keep in mind though before you consider websocketd for any serious development work, is its implementation details. Based on this paragraph from its project page:

Upon startup, websocketd will start a WebSocket server on a specified port, and listen for connections.

Upon a connection, it will fork the appropriate process, and disconnect the process when the WebSocket connection closes (and vice-versa).

Any message sent from the WebSocket client will be piped to the process’s STDIN stream, followed by a \n newline.

Any text printed by the process to STDOUT shall be sent as a WebSocket message whenever a \n newline is encountered.

in our case this means every time a new connection is establish websocketd will start a new instance of our console app which in practice is unlikely to be what we actually want in a websocket application such as a multiplayer game, and in any production system forking will become really expensive really quickly!

Keep in mind though that it’s still a work-in-progress so the implementation details might change in the future.

2 thoughts on “Echo websocket server using websocketd – as if by magic!”