This was one of my favourite talks at the conference and having seen quite a few of his talks Dan North is always a safe bet!

The talk started with a Rantifesto about the state of Agile.

When the Agile manifesto was conceived in 2001, it made a set of value statements of things that we care about: 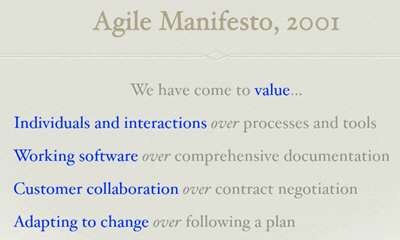 However, as of 2015, we as an industry have come to demonstrate with our behaviours a different set of value statements:

i.e. you can have the best intentions (manifesto) but unless you change your system of work (methodology) it will not make the tiniest bit of impact.

Michael Nygard also touched on this in his Archi­tec­ture with­out an End State talk that, in big enterprises there were these cycles of 3 year plans :

) Dan hypothesized that, perhaps our obsession with predictability stems from the fact that for so long we have based software engineering on civil engineering.

As a young industry, where the majority of us are 1st generation software engineers, we have been making things up as we go and we look to civil engineering for metaphor. I think this highlights two issues that we should address as an industry.

As a whole, an alarmingly small percentage of developers stay in the industry for more than 10 years, in part thanks to a lack of career progression at most companies. Those few brilliant minds, who have been in the industry for decades and with valuable experiences to share, are often locked up inside companies such as Google and Microsoft and are rarely available to the general public.

The internet is a great place to find answers to just about anything you can think of, but it’s also full of noise and bad advice, not to mention a lot of prejudice and judgement. I have found conferences to be a great place to meet and speak to people who are genuinely smart, open-minded, and whose opinions came from a wealth of experience. But, attending conferences requires significant investment of time and finance, and the people you need to speak to about particular problems aren’t always available.

Some form of mentorship programmes would help pass on the knowledge and experience to younger generations and maybe, just maybe, help ease this endless cycle of reinventing the wheel.

Although there is a vast wealth of previous work for us to learn from, they’re often not easily discoverable or accessible (e.g. hidden behind ACM memberships) and hard to digest (why are technical papers still published in paper format when new mediums are available is baffling).

The sheer number of academic papers that are published every year can also be overwhelming to those of us not steeped in the academic world. To get started, look for a Papers We Love  meetup group in your city and go to their meet ups.

Whilst metaphors can be useful to help us make sense of unfamiliar things, but we can then over-extend them.

Ultimately there are many places – e.g. the need for a quantity surveyor to provide estimates for materials and costs – where the metaphor starts to break down.

Dan hypothesized that the reason why we’re so hung up on features in software is because in our metaphor, civil engineering, the bigger is better. 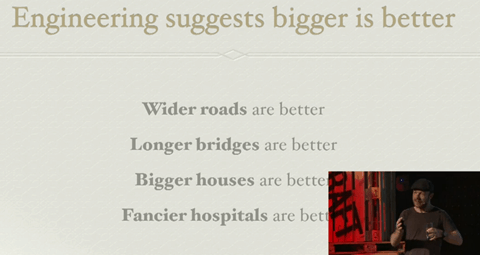 Whilst attacking this fixation on features from a different angle, Melissa Perri described the tendency many organizations have of keep on building features as The Build Trap. 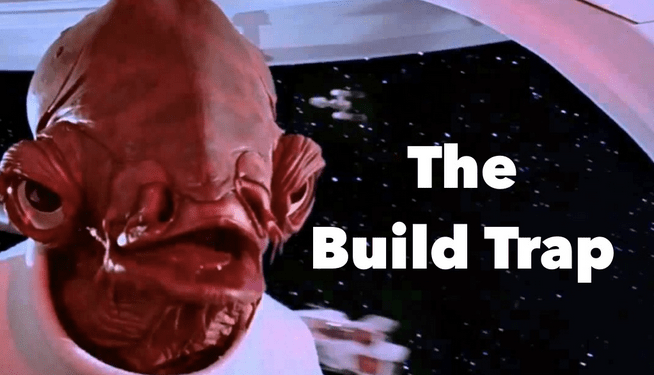 Intuitively we all know that in software engineering, the bigger is not better, in fact, the opposite is true.

So what if civil engineering isn’t an appropriate metaphor for software engineering?

Earlier in the opening keynote Complexity is Outside the Code Dan and Jessica Kerr said that the goal of software engineering should be to sustainably minimize lead time to business impact.

Lead time to someone saying thank you is the only reputation metric that matters.

Lead time is mostly made up of handoffs, so even if your developers and testers are very efficient in their siloed tasks, the handoffs are still going to hurt you. A typical work item spends 90% of its life not having stuff done to it – mostly because it’s waiting in the queue.

No one wants surgery!

Just as no one wants to go under the knife for fun, neither do businesses want software for the sake of having them – they want solutions to problems and it just so happens that in this day and age that solution is often made up of software.

But if I must have a surgery, I want to have the minimum amount of surgery possible (i.e. small is beautiful).

I want the most competent and experienced professions to operate on me. And I want them to use established, proven techniques, and yet, still prepared for the unexpected and ready to use more experimental approaches when required.

But mostly, I rather not have the surgery, I just want to be well!

Just as surgery is more than just cutting people up, there’s more to software than features.

In the context of surgery, there is also discovery,  which is about the individual patients and exploring what problems they have by using blood tests and other exploratory steps.

For this to work there is a trust relationship between the patient and the surgeon. Whereby the patient allows himself to be vulnerable and have faith in the surgeon’s knowledge of the domain and professionalism to make him better.

And then there’s Kaizen. In medical science, the use of anaesthetics, washing your hands before surgery, etc. are all about improving the process of surgery and help reduce the mortality rate of patients.

We need to re-engage

Dan used the civil engineering metaphor once more to describe how, by not engaging with the business to find out what problems they’re trying to solve, we have allowed ourselves to be the order takers who simply react to the list of features we’re handed.

Instead, we should aim for a more consultative relationship like the one between patients and surgeons.

We also need to re-engage with the IT management whom has been steeped in the civil engineering metaphor for so long. We need to think about what it means to lead and govern an IT organization in which less is more. We need to help them help us. 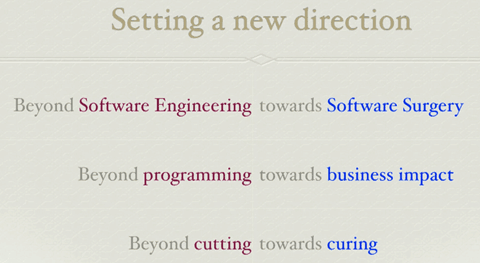 Features, Discovery and Kaizen are all first class work, you need to schedule, measure, track and showcase each and have some of each in flight at all times.