One of my key takeaways from Tammer Saleh’s microservices anti-patterns talk at CraftConf is that we need to record correlation IDs to help us debug microservices.

Why do we need Correlation IDs?

Suppose a user request comes in and after various aspects of the request has been handled by several services something goes wrong.

Even though every service would have been logging along the way it’s no easy task to find all the relevant log messages for this request amongst millions of log messages!

This is the problem that correlation IDs help us solve.

The idea is simple. When a user-facing service receives a request it’ll create a correlation ID, and:

The correlation ID can then be used to quickly find all the relevant log messages for this request (very easy to do in Elasticsearch). 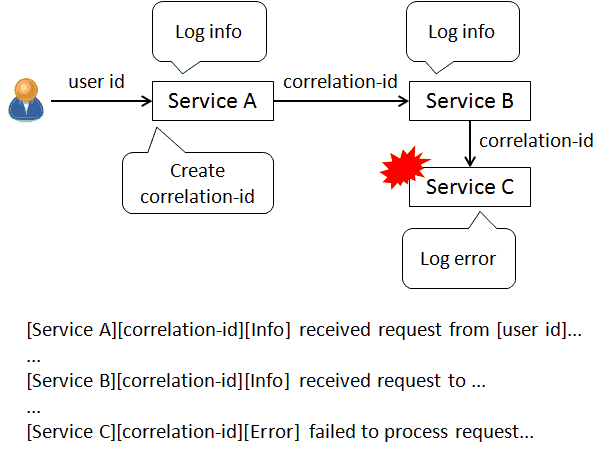 Additionally, you might wish to pass along other useful contextual information (such as payment ID, tournament ID, etc.) about the request to downstream services. Otherwise they would only appear in log messages from services where they originated from.

It’s helpful to have these contextual information in the error log message so that you don’t have to scan through all relevant messages (by correlation ID) to piece them together.

Whilst it’s a very simple pattern, it’s still one that has to be applied in every log message and every HTTP request and HTTP handler. That’s a lot of unwanted cognitive and development overhead.

In his talk,Tamer suggested that it’s just a fact of life that you have to live with, and that every team has to remember to implement this pattern in every service they create.

To me that would be setting my fellow developers up to fail – someone is bound to forget at one time or another and the whole thing falls down like a house of cards. 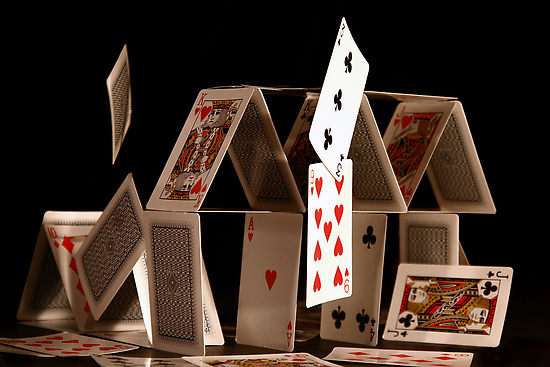 I wanted a more systematic approach for our team.

When it comes to implementation patterns like this, my natural tendency is to automate them with PostSharp. However in this case, it doesn’t seem to be a suitable solution because we need to control too many different components:

Instead, this looks like a battle that needs to be fought on multiple fronts.

Fortunately we already have abstractions in the right places!

Our custom log4net appender can be augmented to look for any captured correlation IDs whenever it logs a message to Elasticsearch so they each appear as a separate, searchable field.

We also have a custom HttpClient that wraps the BCL HttpClient so that:

This HttpClient is also augmented to look for any captured correlation IDs and send them along as  headers in every HTTP call.

For the logger and HTTP client, they need to have a consistent way to get the captured correlation IDs for the current request. That’s the job of the CorrelationIds class below.

The tricky thing is that depending on the hosting framework for your web application – we use both Nancy and Asp.Net WebApi – you might need a different way to track the correlation IDs, hence the ICorrelationIdsProvider abstraction.

Rather than forcing the consumer to call CorrelationIds.ProvidedBy, I could have tied in with an IoC container instead. I chose not to because I don’t want to be tied down by our current choice of IoC container.

Both Nancy and Asp.Net have mechanisms for injecting behaviour at various key points in the HTTP request processing pipeline.

In Nancy’s case, you can have a custom bootstrapper:

But we still need to implement the aforementioned ICorrelationIdsProvider interface.

Unfortunately, I can’t use HttpContext.Current in Nancy, so we need to find an alternative way to ensure the captured correlation IDs flow through async-await operations. For this I used a modified version of Stephen Cleary’s AsyncLocal to make sure they flow through the ExecutionContext.

A simplified version of the NancyCorrelationIdsProvider implementation looks like the following:

For Asp.Net WebApi projects, since we can rely on HttpContext.Current to do the dirty work, so the implementation for ICorrelationIdsProvider becomes a trivial exercise.

What wasn’t immediately obvious to me, was how to tap into the request processing pipeline in a way that can be reused. After some research, custom HTTP modules seem to be the way to go.

However, with custom HTTP modules, they still need to be registered in the web application in the web.config.

So, that’s it, what do you think of our approach?

This is the best I have come up with so far, and it has a number of obvious limitations:

If you have some ideas for improvement I would very much like to hear it!