Last time around we looked at Scala’s Case Class in depth and how it compares to F#’s Discriminated Unions. F# also has Active Patterns, which is a very powerful language feature in its own right. Unsurprisingly, Scala also has something similar in the shape of extractors (via the unapply function).

Before we can talk about extractors we have to first talk about Scala’s object again. Remember when we first met object in Scala I said it’s Scala’s equivalent to F#’s module? (except it can be generic, supports inheritance, and multiple inheritance)

Well, turns out Scala has another bit of special magic in the form of an apply function.

In Scala, if you assign a function to a value, that value will have the type Function1[TInput, TOutput]. Since everything in Scala is an object, this value also have a couple of functions on it.

You can use andThen or compose to compose it with another function (think of them as F#’s >> and << operators respectively).

Ok, now that we know what apply function’s role is, let’s go back to object.

If you declare an apply function in an object, it essentially allows the object to be used as a factory class (indeed this is called the Factory pattern in Scala).

You see this pattern in Scala very often, and there are some useful built-in factories such as Option (which wraps an object as Some(x) unless it’s null, in which case returns None). 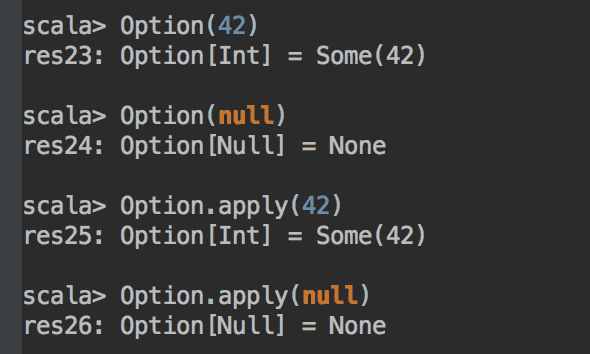 String and BigInt defines their own apply function too (in String‘s case, it returns the char at the specified index) .

You can also define an apply function on a class as well as an object, and it works the same way. For instance…

I find this notion of applying arguments to an object somewhat alien, almost as if this is an elaborate way of creating a delegate even though Scala already have first-class functions…

Ok, can you pass multiple arguments to apply? What about overloading?

What about case classes and case object?

Ok. Can the apply function(s) be inherited and overridden like a normal function?

Check, and Check. Although this is consistent with inheritance and OOP in Java, I can’t help but to feel it has the potential to create ambiguity and one should just stick with plain old functions.

The unapply function (aka extractors)

or, if you don’t want to return anything from the pattern. 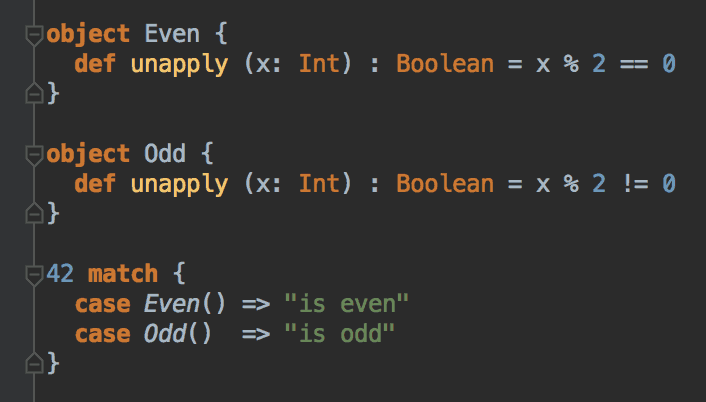 side note: point 2 is interesting. Looking at all the examples on the Internet one might assume the unapply function must return an Option[T], but turns out it’s OK to return any type so long it has the necessary members! 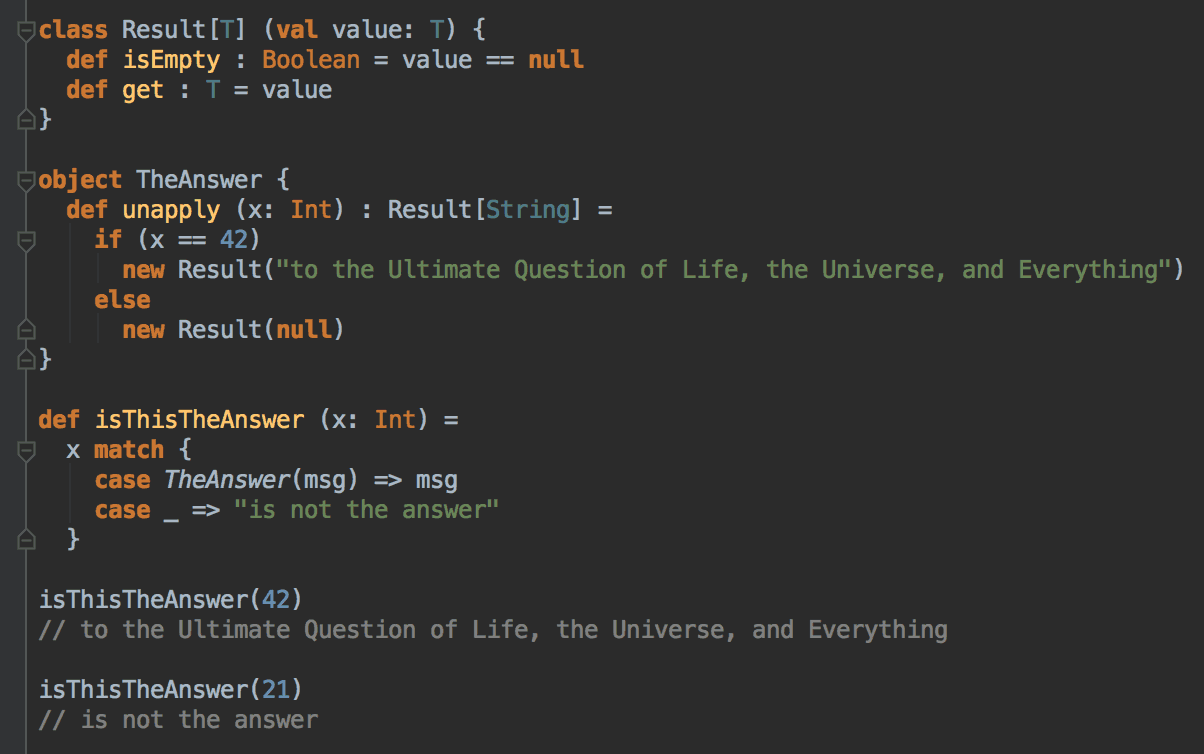 Whilst I can’t think of a situation where I’d need to use anything other than an Option[T], this insight gives me a better understanding of how pattern matching in Scala works. 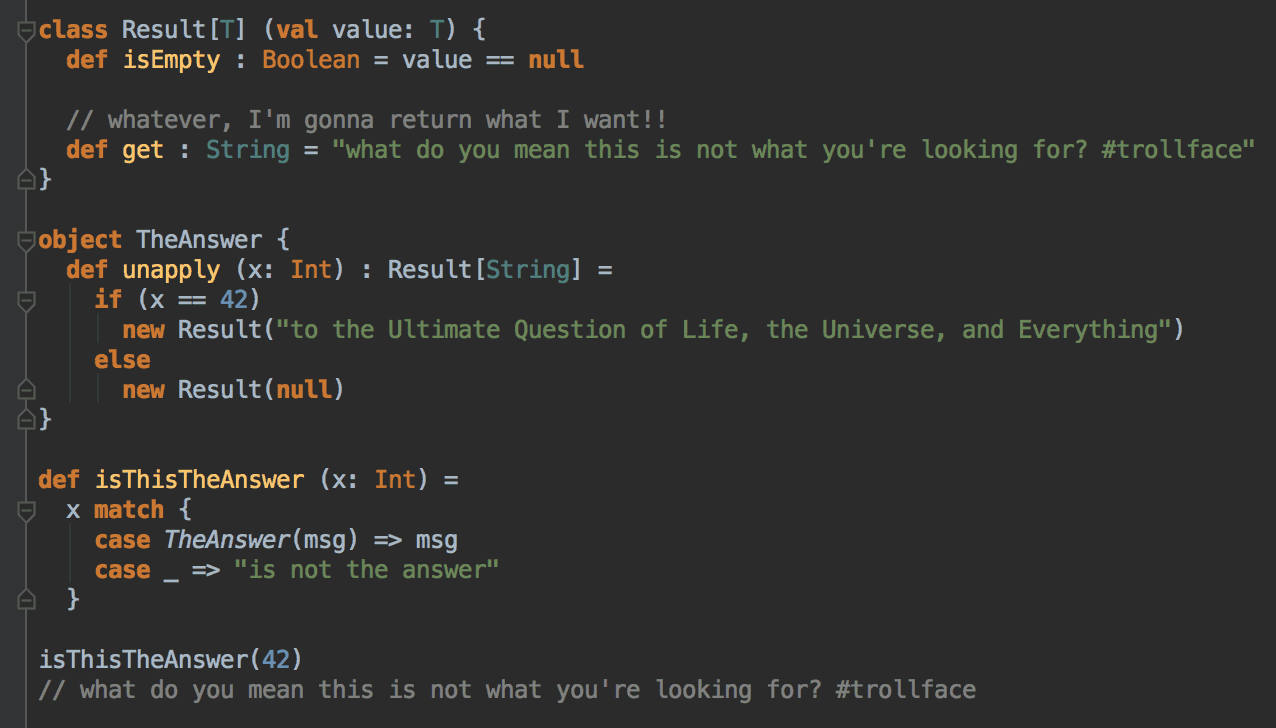 Since the unapply function is a member on an object (like the apply function), it means it should work with a class too, and indeed it does. 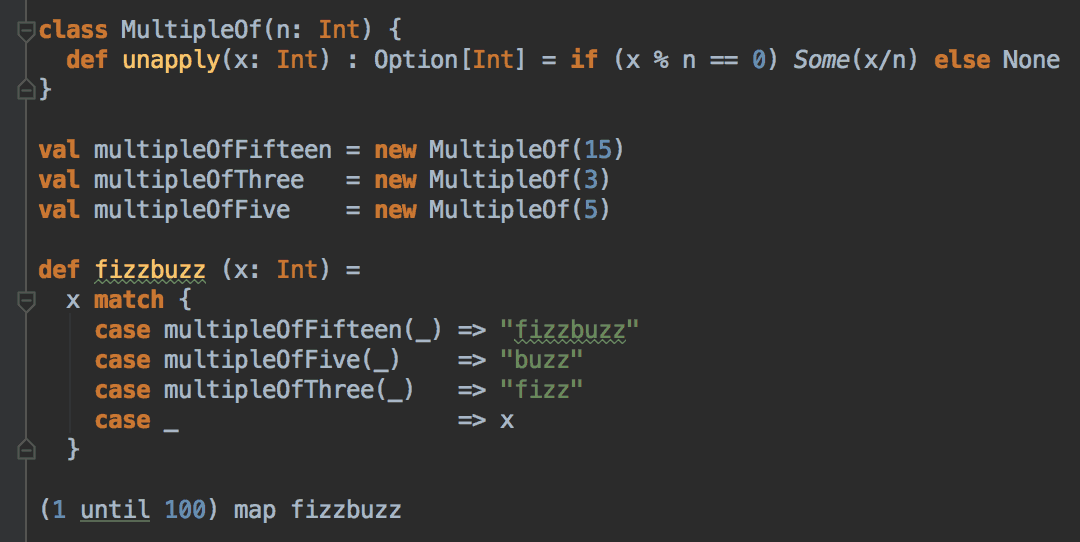 As you can see from the snippet above, this allows you to create parameterized patterns and work around the limitation of having only one argument in the unapply function.

You can nest patterns together too, for example. 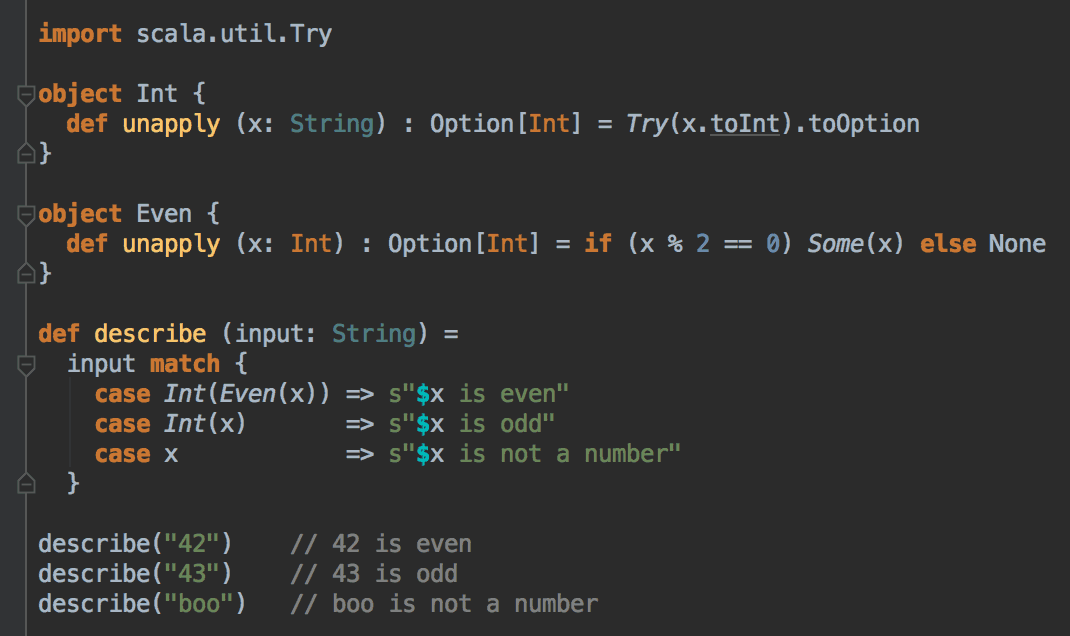 Here, the Int pattern returns an Int, and instead of binding it to a name we can apply another pattern inline to check if the value is even.

And whilst it doesn’t get mentioned in any of the articles I have seen, these patterns are not limited to the match clause either. For instance, you can use it as part of declaration. (but be careful, as you’ll get a MatchError if the pattern doesn’t match!)

Like extractors, it gives you named patterns that you can use in pattern matching, and comes in 3 flavours: single-case, partial, and multi-case. 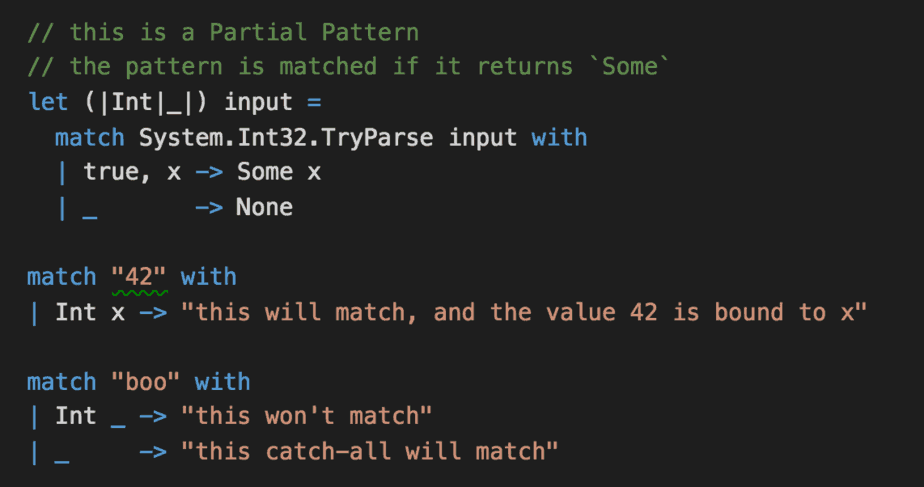 You can parameterise a pattern.

If a pattern’s declaration has multiple arguments, then the last argument is the thing that is being pattern matched (same as the single argument to unapply); the preceding arguments can be passed into the pattern at the call site. For example…

If you don’t want to return anything, then you can always return () or Some() instead (partial patterns require the latter).

You can also mix and match different patterns together using & and |. So we can rewrite the fizzbuzz function as the following..

Patterns can be nested. 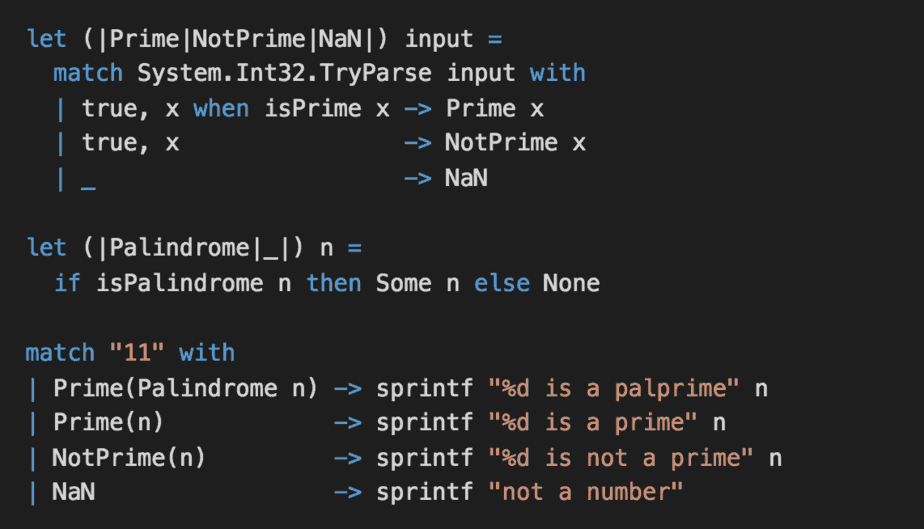 Finally, patterns can be used in assignment as well as function arguments too. 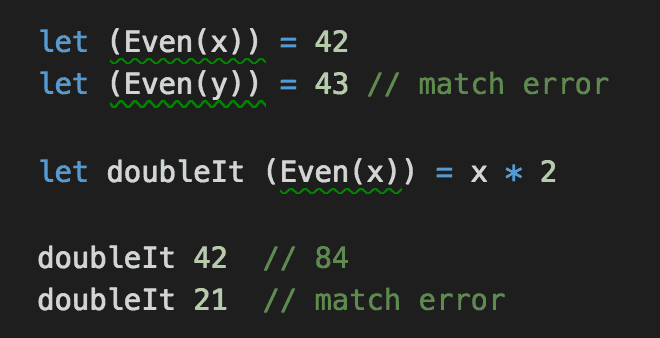 Scala’s extractor is the equivalent of F#’s partial pattern, and although there is no like-for-like replacement for single-case and multi-case patterns you can mimic both with extractor(s):

Whilst it’s possible to create parameterized patterns with Scala extractors (by using class instead of object), I find the process of doing so in F# to be much more concise. In general, the syntax for declaring patterns in Scala is a lot more verbose by comparison.

The biggest difference for me though, is that in F# you can use multiple patterns in one case expression by composing them with & and |. This makes even complex patterns easy to express and understand.

2 thoughts on “From F# to Scala – apply & unapply functions”