Having spoken to quite a few people about using AWS Lambda in production, testing and CI/CD are always high up the list of questions, so I’d like to use this post to discuss the approaches that we took at Yubl.

Please keep in mind that this is a recollection of what we did, and why we chose to do things that way. I have heard others advocate very different approaches, and I’m sure they too have their reasons and their approaches no doubt work well for them. I hope to give you as much context (or, the “why”) as I can so you can judge whether or not our approach would likely work for you, and feel free to ask questions in the comments section.

In Growing Object-Oriented Software, Guided by Tests, Nat Pryce and Steve Freeman talked about the 3 levels of testing [Chapter 1]:

As you move up the level (acceptance -> unit) the speed of the feedback loop becomes faster, but you also have less confidence that your system will work correctly when deployed.

With the FAAS paradigm, there are more “code we can’t change” than ever (AWS even describes Lambda as the “glue for your cloud infrastructure”) so the value of integration and acceptance tests are also higher than ever. Also, as the “code we can’t change” are easily accessible as service, it also makes these tests far easier to orchestrate and write than before.

The functions we tend to write were fairly simple and didn’t have complicated logic (most of the time), but there were a lot of them, and they were loosely connected through messaging systems (Kinesis, SNS, etc.) and APIs. The ROI for acceptance and integration tests are therefore far greater than unit tests.

It’s for these reason that we decided (early on in our journey) to focus our efforts on writing acceptance and integration tests, and only write unit tests where the internal workings of a Lambda function is sufficiently complex.

In Growing Object-Oriented Software, Guided by Tests, Nat Pryce and Steve Freeman also talked about why you shouldn’t mock types that you can’t change [Chapter 8], because…

…We find that tests that mock external libraries often need to be complex to get the code into the right state for the functionality we need to exercise.

The mess in such tests is telling us that the design isn’t right but, instead of fixing the problem by improving the code, we have to carry the extra complexity in both code and test…

Even if we get it right once, we have to make sure that the tests remain valid when we upgrade the libraries…

I believe the same principles apply here, and that you shouldn’t mock services that you can’t change. 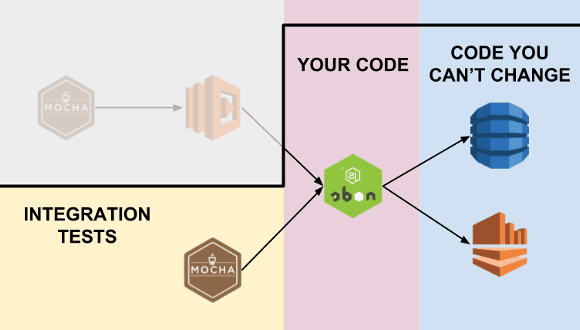 A Lambda function is ultimately a piece of code that AWS invokes on your behalf when some input event occurs. To test that it integrates correctly with downstream systems you can invoke the function from your chosen test framework (we used Mocha).

Since the purpose is to test the integration points, so it’s important to configure the function to use the same downstream systems as the real, deployed code. If your function needs to read from/write to a DynamoDB table then your integration test should be using the real table as opposed to something like dynamodb-local.

It does mean that your tests can leave artefacts in your integration environment and can cause problems when running multiple tests in parallel (eg. the artefacts from one test affect results of other tests). Which is why, as a rule-of-thumb, I advocate:

The same applies to acceptance tests. 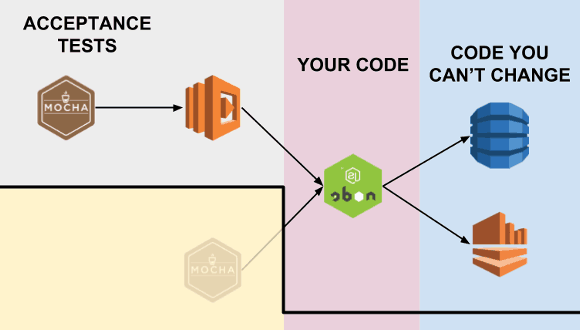 …Wherever possible, an acceptance test should exercise the system end-to-end without directly calling its internal code.

An end-to-end test interacts with the system only from the outside: through its interface…

This sounds like a lot of effort (it is), but has to be done anyway repeatedly during the software’s lifetime…

Once the integration tests complete successfully, we have good confidence that our code will work correctly when it’s deployed. The code is deployed, and the acceptance tests are run against the deployed system end-to-end.

Take our Search API for instance, one of the acceptance criteria is “when a new user joins, he should be searchable by first name/last name/username”. 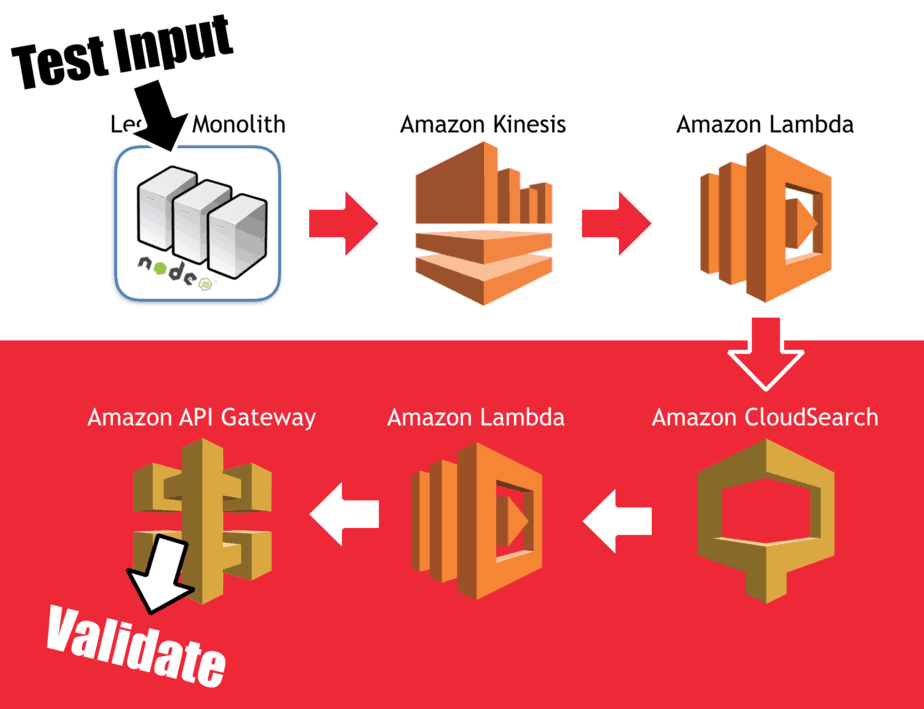 The acceptance test first sets up the test condition – a new user joins – by interacting with the system from the outside and calling the legacy API like the client app would. From here, a new-user-joined event will be fired into Kinesis; a Lambda function would process the event and add a new document in the User index in CloudSearch; the test would validate that the user is searchable via the Search API.

Because a new user is added to CloudSearch asynchronously via a background process, it introduces eventual consistency to the system. This is a common challenge when you decouple features through events/messages. When testing these eventually consistent systems, you should avoid waiting fixed time periods (see protip 5 below) as it makes your tests brittle. 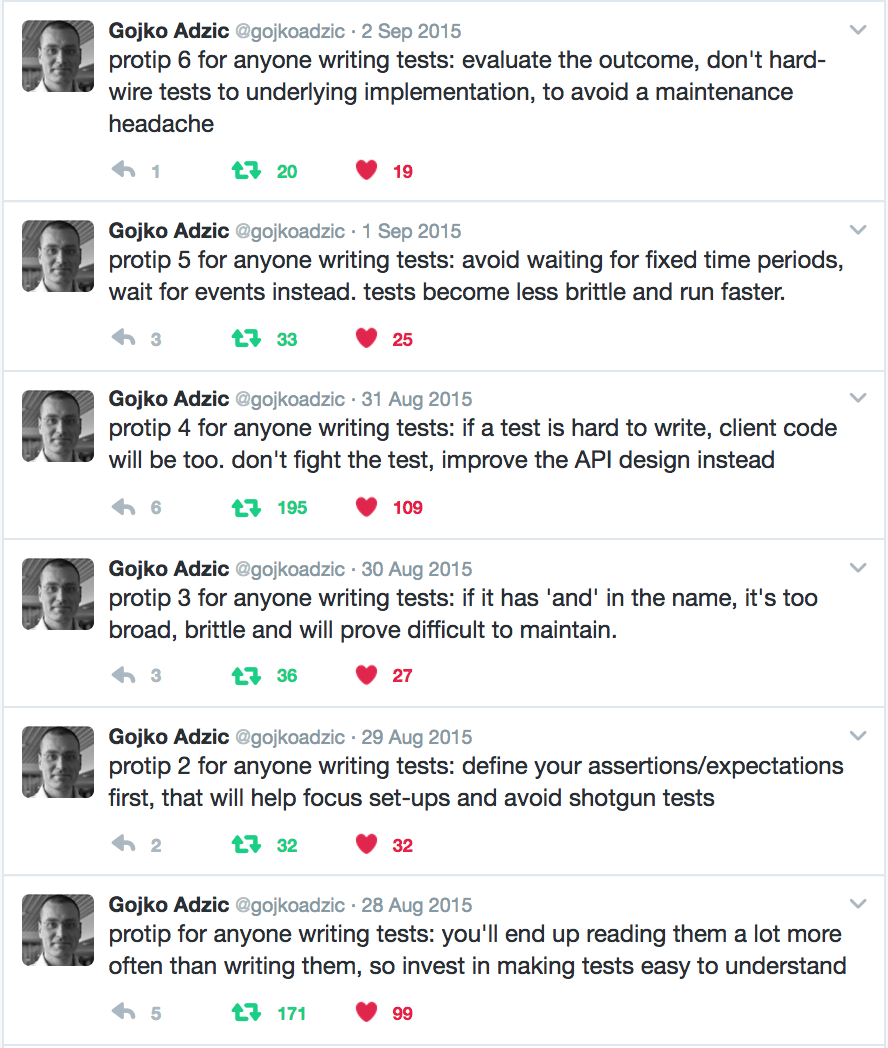 In the “new user joins” test case, this means you shouldn’t write tests that:

and instead, write something along the lines of:

We also found that, most of the time the only difference between our integration and acceptance tests is how our function code is invoked. Instead of duplicating a lot of code and effort, we used a simple technique to allow us to share the test cases.

Suppose you have a test case such as the one below.

The interesting bit is on line 22:

In the when module, the function we_invoke_get_all_keys will either

depending on the value of process.env.TEST_MODE, which is an environment variable that is passed into the test via package.json (see below) or the bash script we use for deployment (more on this shortly).

Whilst we had around 170 Lambda functions running production, many of them work together to provide different features to the app. Our approach was to group these functions such that:

The rationale for this grouping strategy is to:

Although functions are grouped into projects, they can still be deployed individually. We chose to deploy them as a unit because:

For example, in the Yubl app, you have a feed of posts from people you follow (similar to your Twitter timeline). 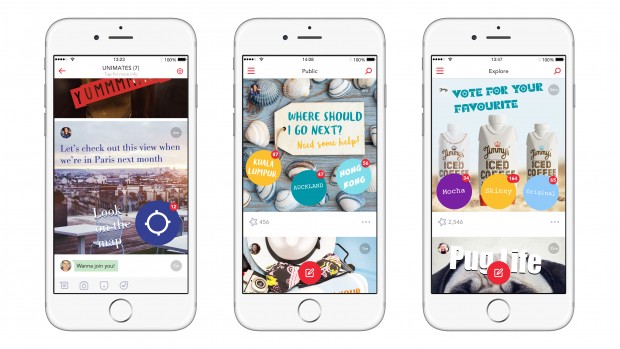 To implement this feature there was an API (with multiple endpoints) as well as a bunch of background processing functions (connected to Kinesis streams and SNS topics). 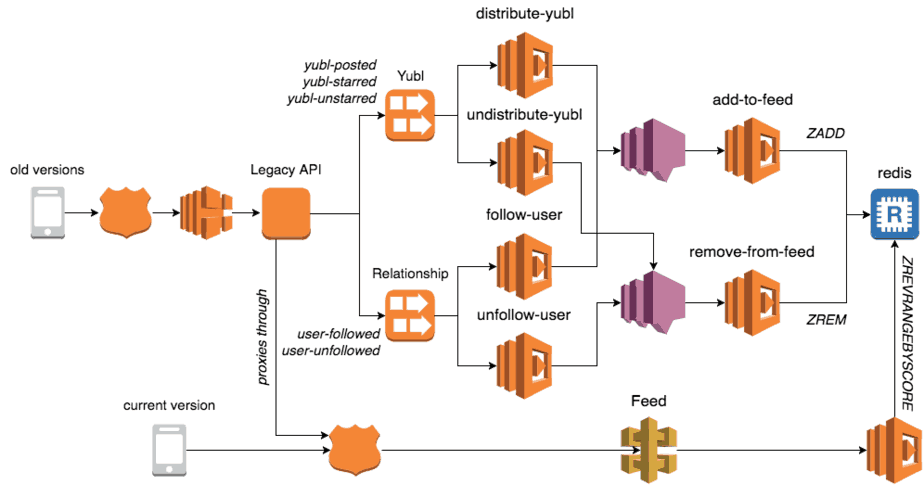 The API has two endpoints, but they also share a common custom auth function, which is included as part of this project (and deployed together with the get and get-yubl functions).

The background processing (initially only Kinesis but later expanded to include SNS as well, though the repo wasn’t renamed) functions have many shared code, such as the distribute module you see below, as well as a number of modules in the lib folder.

All of these functions are deployed together as a unit.

We used the Serverless framework to do all of our deployments, and it took care of packaging, uploading and versioning our Lambda functions and APIs. It’s super useful and took care of most of the problem for us, but we still needed a thin layer around it to allow AWS profile to be passed in and to include testing as part of the deployment process.

We could have scripted these steps on the CI server, but I have been burnt a few times by magic scripts that only exist on the CI server (and not in source control). To that end, every project has a simple build.sh script (like the one below) which gives you a common vocabulary to:

Our Jenkins build configs do very little and just invoke this script with different params.

To this day I’m still confused by Continuous “Delivery” vs Continuous “Deployment”. There seems to be several interpretations, but this is the one that I have heard the most often:

Regardless of which definition is correct, what was most important to us was the ability to deploy our changes to production quickly and frequently.

Whilst there were no technical reasons why we couldn’t deploy to production automatically, we didn’t do that because:

In our setup, there were two AWS accounts:

(dev for development, test for QA team, staging is a production-like, and demo for private beta builds for investors, etc.)

In most cases, when a change is pushed to Bitbucket, all the Lambda functions in that project are automatically tested, deployed and promoted all the way through to the staging environment. The deployment to production is a manual process that can happen at our convenience and we generally avoid deploying to production on Friday afternoon (for obvious reasons 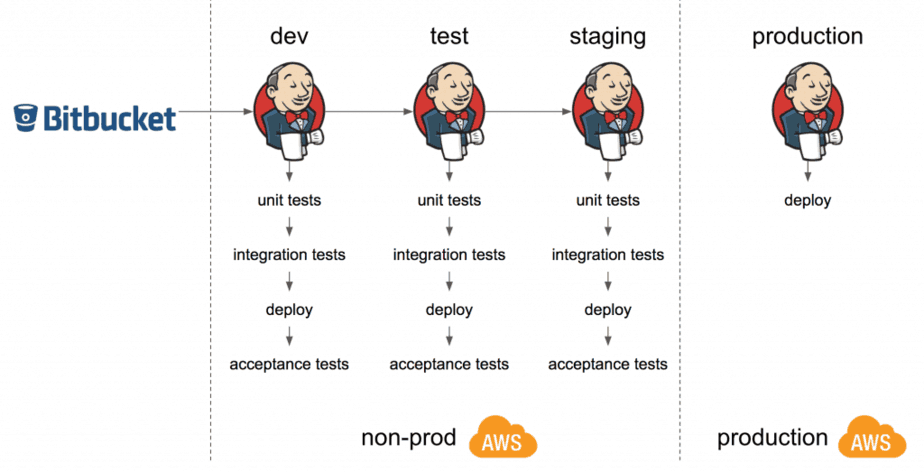 The approaches we have talked about worked pretty well for our team, but it was not without drawbacks.

In terms of development flow, the focus on integration and acceptance tests meant slower feedback loops and the tests take longer to execute. Also, because we don’t mock downstream services it means we couldn’t run tests without internet connection, which is an occasional annoyance when you want to work during commute.

These were explicit tradeoffs we made, and I stand by them even now and AFAIK everyone in the team feels the same way.

In terms of deployment, I really missed the ability to do canary releases. Although this is offset by the fact that our user base was still relatively small and the speed with which one can deploy and rollback changes with Lambda functions was sufficient to limit the impact of a bad change.

Whilst AWS Lambda and API Gateway doesn’t support canary releases out-of-the-box it is possible to do a DIY solution for APIs using weighted routing in Route53. Essentially you’ll have:

Again, this would only work for APIs and not for background processing (SNS, Kinesis, S3, etc.).

So that’s it folks, hope you’ve enjoyed this post, feel free to leave a comment if you have any follow up questions or tell me what else you’d like to hear about in part 3.