One of the simplest and most efficient cost optimization for Lambda is to right-size the memory allocation for your functions. It used to be a dark art that requires plenty of trial-and-error, until the aws-lambda power-tuning app from Alex Casalboni. Which uses Step Functions to execute your function against different memory sizes to help you find the best configuration for speed, cost or a balance of the two.

However, managing the deployment of the aws-lambda-power-tuning app (which is available via the Serverless Application Repository) is an extra overhead that most of us rather do without. Not to mention the headache of keeping it up-to-date whenever Alex releases new features.

So, to make power tuning functions more accessible, I added support for it in the lumigo-cli. You can tune a function with a simple command lumigo-cli powertune-lambda -r us-east-1 -n my-function --strategy balanced . 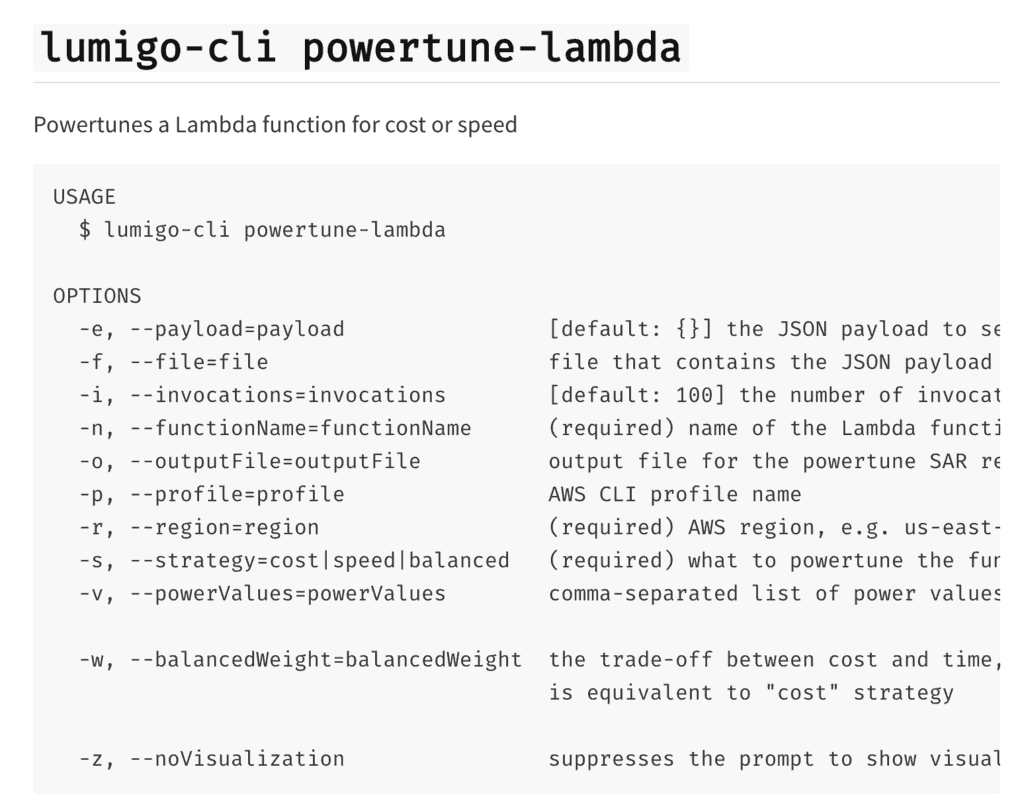 Since version 0.39.0 of the lumigo-cli, it’s now even easier to integrate it with CI/CD pipelines. Because I added support for storing the output of the app (see below) into a local file, so they can be easily parsed, and the ability to suppress the command line prompt to visualize the result.

Check out this repo for a demo project that automatically tunes its functions as part of its CI/CD pipeline. Let’s walk through it.

The demo project uses the Serverless framework to configure and deploy its functions. But the same approach works with other deployment frameworks too. The important thing to note is that we have three functions:

By default, the Serverless framework configures functions with 1024MB of memory and 6 seconds timeout.

In the project root, there is an examples folder. This is where you put the example payloads to use when tuning each of the functions. 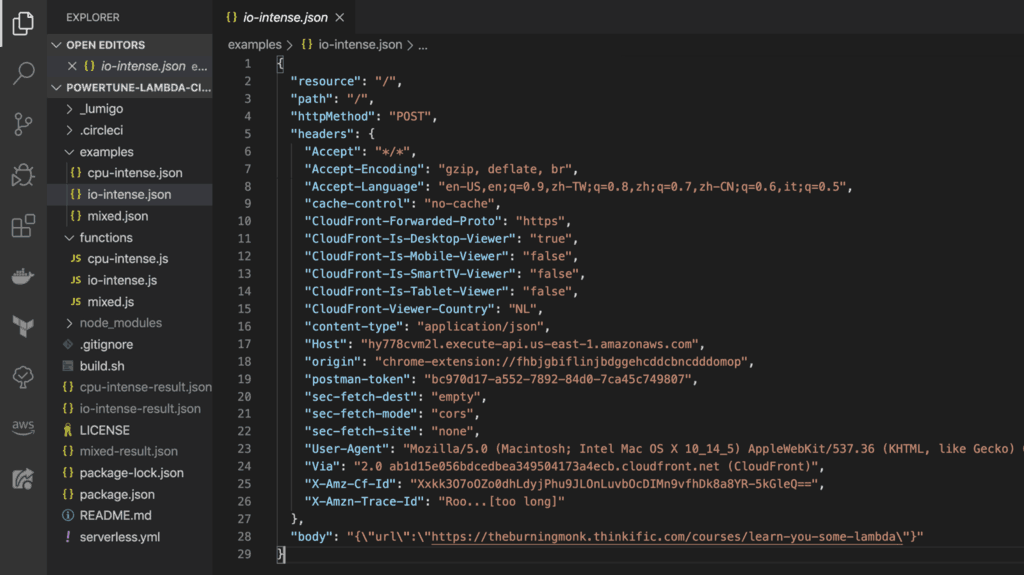 There is also a build.sh script, where much of the magic happens during the CI/CD pipeline.

As part of my projects, I usually include a build.sh script. This script encapsulates the key steps for my CI/CD pipelines, such as running tests and deploying the project. It simplifies the process of testing my CI/CD pipelines since I can easily run it locally. And it allows me to move between CI tools easily since the “meat” of the pipeline is in the scripts.

When adopted broadly, it gives you a DSL for all of your projects, e.g.

In this particular case, I have a command to tune the functions in this project to a strategy of my choosing – cost, speed or balanced. For example, by running ./build.sh tune dev us-east-1 balanced .

This command can be run AFTER the functions have been deployed. As you can see, it uses the lumigo-cli to tune each of the functions.

Couple of things to note here:

The io-intense function (see below) is an API Gateway function and extracts the url from the POST body. So, to tune this function we need to invoke it with a payload that looks like an API Gateway event.

Similar, if you have functions that process events from SNS, SQS, Kinesis and so on, you would need to tailor the payload for each. Hence the purpose of the examples folder.

Third-party tools such as Lumigo can make your life easier here. As you can see the invocation event for a function in the Transactions view. This makes it easy to capture sample payloads without having to temporarily add print statements to your functions.

If the function’s memory size doesn’t match the optimal power, then we can update it in-place using the AWS CLI.

update 24/03/2020: since lumigo-cli v0.40.0 you can now apply the optimal power to the function with the powertune-lambda command, without having to script it yourself. 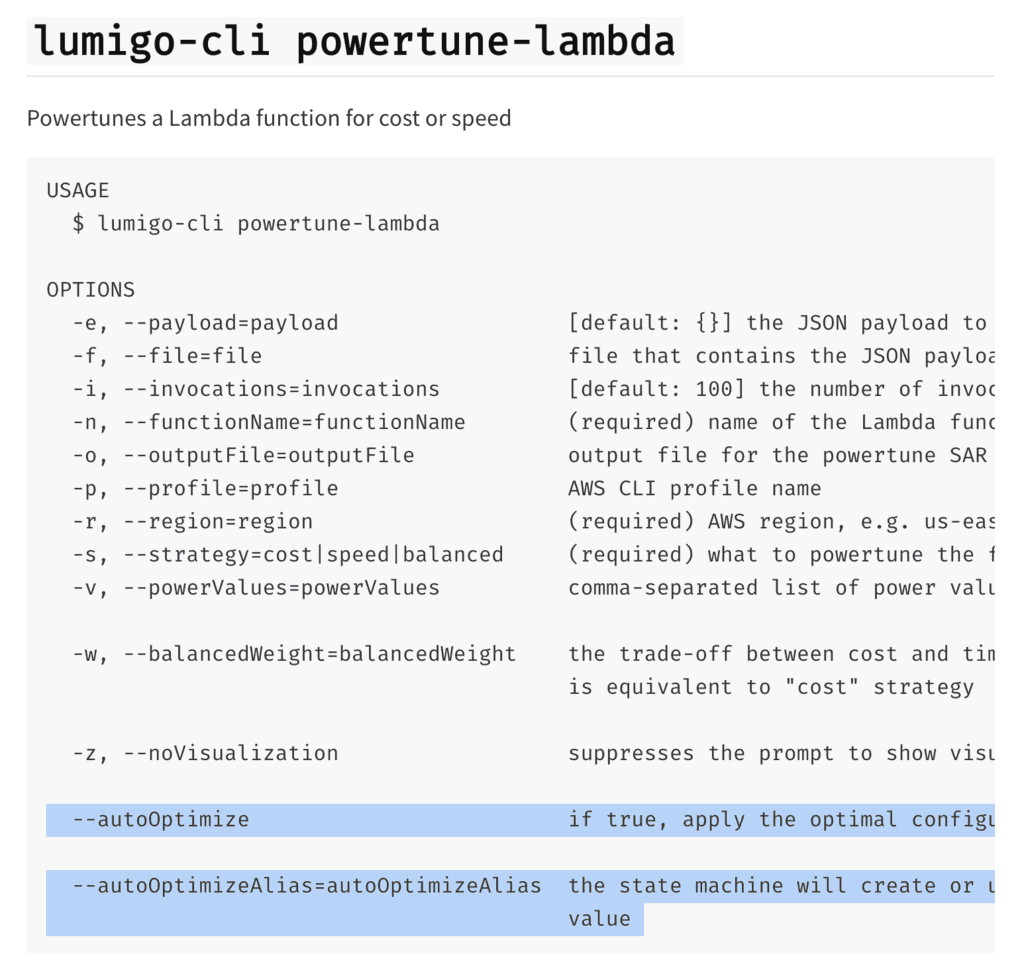 I decided to use CircleCI here because it’s free for public repos and I have used it to good effect in the past. But the approach works with other CI tools too.

And when the pipeline finishes, all 3 functions’ memory size would be fine-tuned to give the best performance-to-cost ratio.

In this post, we saw how you can optimize the memory configuration for your functions as part of the CI/CD pipeline. This ensures that your functions are always fine-tuned to deliver the best performance at the lowest cost.

The approach is applicable to different deployment frameworks and CI tools. Broadly speaking, your pipeline would consist of these steps:

The functions’ configurations are updated in-place and the changes are never committed back into the source code. The problems with this approach are:

To address these problems, you can extend the approach I have shown you in this post. For example, instead of updating the functions in-place, you can create a PR when improvements are identified. Assuming there are no environmental factors that can drastically affect performance, then you’d only need to run tuning in the deployment pipeline for dev. This addresses the aforementioned problems.

If you can standardise on the deployment and CI tool you use, then you can automate the process even more. For example:

And finally, here are some relevant resources for you to explore: