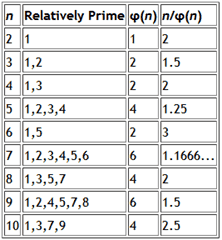 Which in essence is what the totient function in my solution is doing, except to avoid any rounding errors it actually multiplies the number n by the product of the numerators before dividing by the product of denominators, i.e. 36 * (1 * 2) / (2 * 3) instead of 36 * 0.5 * 0.66666666667 which introduces a rounding error which may or may not has an influence in the result.

This solution takes a long time and doesn’t comply with the under one minute rule, by using a prime sieve like this one I was able to get the execution time down to under 50s on my machine.  Here is the revised code using the aforementioned sieve implementation: