I touched on the topic of memoization in the past in relation to doing aspect-oriented programming with PostSharp, however, with functional languages like F#, Haskell or Erlang there is no such frameworks (although PostSharp should still work with F# to some extent) to help you.

That’s not to say that you can’t do AOP in a functional language though, in fact, here’s a simple implementation of the aforementioned memoizer in F# as a higher-order function: 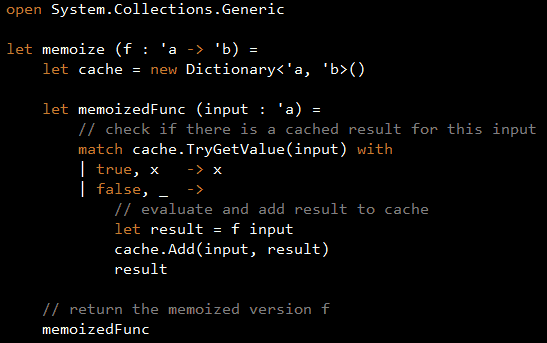 Here’s a FSI session that shows the memoize function in action: 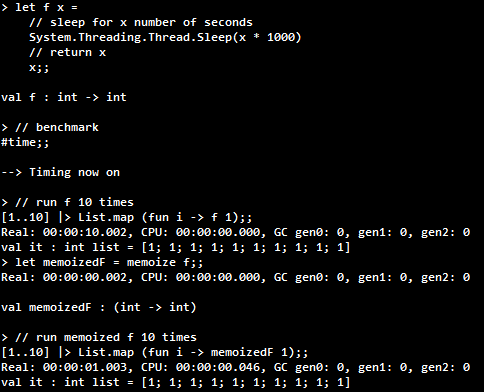 Note that the memoized version of the original function f took a second to execute the first time around but then subsequent calls didn’t take anytime.

The implementation I’ve shown here is a very basic and only works for functions that takes in a single parameter, if you can think of an elegant way to make it support functions with different number of inputs please feel free to contact me as I’m very interested to hear about your thoughts.

In general, I don’t feel AOP is as well suited to functional programming as it is to object oriented programming, but there’s still a pocket of use cases where AOP can be beneficial. Memoization is one of them, so is tracing and input validation, all of which is possible through the use of higher-order functions. A word of warning though, If you’re familiar with frameworks such as PostSharp, the AOP experience you’re going to get through higher-order functions is not going to be as unobtrusive as you’re used to.