Normally, with languages like C# or Java, there is quite a bit of overhead in creating a quick and dirty program to do small tasks like bulk renaming files in a director, etc. This is the spot that is filled by scripting languages like Python, Perl and Ruby, but did you know that you can write F# code in a scripting style too?

If you have F# installed, it will register the .fsx extension as F# script files. From within Windows Explorer you can execute it directly by selecting the “Run with F# Interactive” context menu option: 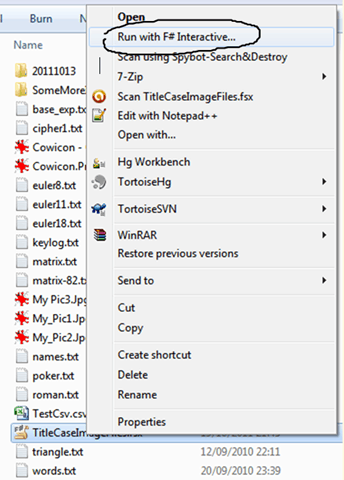 Executing a F# script file this way would send the file to the console version of F# interactive, fsi.exe.

You can also double click on the file to edit it inside Visual Studio, whilst writing F# as a script you have access to a number of compiler directives such as __SOURCE_DIRECTORY__ and __SOURCE_FILE__ which returns the current directory and filename respectively.

As a simple example, here’s a script I put together in 5 minutes that identifies image files in the current directory and sub-directories and renames them to be title cased, e.g. “my_image.jpg” will become “My_Image.jpg”.

Using F# in this fashion has the obvious benefit that you don’t have to learn another language just so that you can hack some scripts together to perform simple tasks for you. Build automation tools is one area this can be very useful. Inspired by the Rake build tool of the Ruby world – which allows you to write your build script in Ruby – we now have a Fake build tool that lets us do the same with F#.