The syntaxes for creating enums and discriminated unions in F# are very similar too: 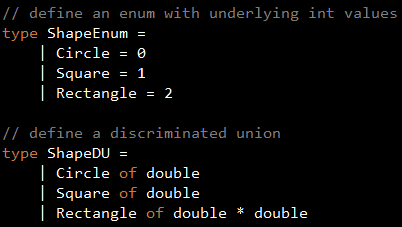 Despite their apparent similarities, there are some significant differences between the two:

Now let’s take a closer look at these differences.

As enums are little more than syntactic sugar over a primitive integral type such as int, there is no guarantee that the value of an enum is valid. For instance, it’s possible to create an instance of an enum type with an integral value that is not associated with one of the named constants:

it’s easy to see how bugs can creep in when you mistakenly create enum values that don’t make any sense, especially when you’re working with enum values from external sources. Which is why it’s a good practice to check the enum values with the static Enum.IsDefined method.

Discriminated unions, on the other hand, can only be one of the defined values, any attempts to do otherwise will be met with a swift compiler error!

Enums only hold one piece of data

This one is self evident from the earlier snippet, enums only hold one piece of data but discriminated unions hold a tuple of data.

Enums are value types and instances of an enum type therefore reside on the stack as a few bytes. Discriminated unions, as do all other reference types, reside in the heap (plus a pointer on the stack whilst it’s still referenced) and need to be garbage collected when they are no longer referenced.

Enums can be used as bit flags