Note: Don’t forget to check out Benchmarks page to see the latest round up of binary and JSON serializers.

Following on from my previous test, I have now included JsonFx and as well as the Json.Net BSON serializer in the mix to see how they match up.

The results (in milliseconds) as well as the average payload size (for each of the 100K objects serialized) are as follows.

Graphically this is how they look: 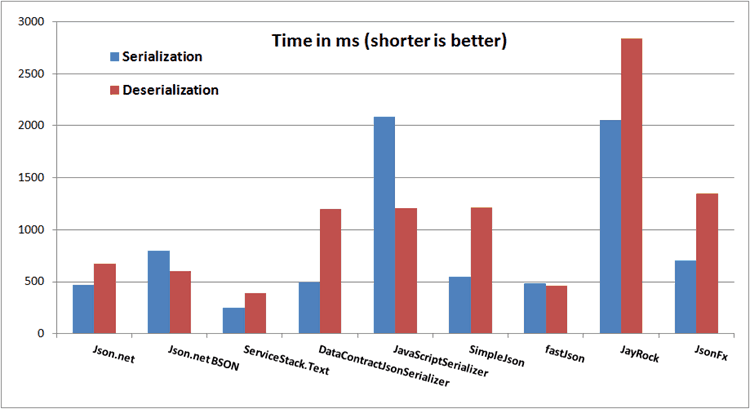 I have included protobuf-net in this test to provide more meaningful comparison for Json.Net BSON serializer since it generates a binary payload and as such has a different use case to the other JSON serializers.

In general, I consider JSON to be appropriate when the serialized data needs to be human readable, a binary payload on the other hand, is more appropriate for communication between applications/services.

You can see from the results above that the Json.Net BSON serializer actually generates a bigger payload than its JSON counterpart. This is because the simple POCO being serialized contains an array of 10 integers in the range of 1 to 100. When the integer ‘1’ is serialized as JSON, it’ll take 1 byte to represent as one character, but an integer will always take 4 bytes to represent as binary!

In comparison, the protocol buffer format uses varint encoding so that smaller numbers take a smaller number of bytes to represent, and it is not self-describing (the property names are not part of the payload) so it’s able to generate a much much smaller payload compared to JSON and BSON.

Benchmarks do not tell the whole story, and the numbers will naturally vary depending on a number of factors such as the type of data being tested on. In the real world, you will also need to take into account how you’re likely to interact with the data, e.g. if you know you’ll be deserializing data a lot more often than serializing them then deserialization speed will of course become less important than serialization speed!

In the case of BSON and integers, whilst it’s less efficient (than JSON) when serializing small numbers, it’s more efficient when the numbers are bigger than 4 digits.