UPDATE 07/09/2016 : read part 2 on how to elastically scale Lambda function based on no. of messages available in the queue.

It’s been a year since the release of AWS Lambda service and here at Yubl we’re at the start of an exciting journey to move our stack to Lambda (using the awesome Serverless framework).

One feature that’s sadly missing though, is support for SQS. Every AWS evangelist I have spoken to tells me that it’s one of the most requested features from their customers and that it’s coming. It’s not the first time I have heard this kind of non-committal response from those involved with Amazon and experience tells me not to expect it to happen anytime soon.

But, if you’re itching to use AWS Lambda with SQS and don’t wanna wait an unspecified amount of time to get there, you have some options right now:

Whilst you can use SNS and Kinesis with Lambda already, SQS‘s support for dead letter queues still makes it a better choice in situations where eventual consistency can be tolerated but outright data losses should be mitigated.

Whilst you can process SQS using EC2-hosted applications already, Lambda delivers a potential cost saving for low-traffic environments and more granular cost control as you scale out. It also provides an easy and fast deployment pipeline, with support for versioning and rollbacks.

Finally, we’ll walk through a simple example and write a recursive Lambda function in Node.js using the Serverless framework.

As a compromise, both SNS and Kinesis can be used with Lambda to allow you to delay the execution of some work till later. But semantically there are some important differences to consider.

If the cause is temporal, for example, there are outages to downstream systems – DB is unavailable, or other services are down/timing out – then the dead letter queue helps:

With SNS, messages are retried 3 times and then lost forever. Whether or not this behaviour is a showstopper for using SNS needs to be judged against your requirements.

With Kinesis, the question becomes slightly more complicated. When using Kinesis with Lambda, your degree of parallelism (discussed in more details below) is equal to the no. of shards in the stream. When your Lambda function fails to process a batch of events, it’ll be called again with the same batch of events because AWS is keeping track of the position of your function in that shard.

In essence, this means the retry strategy is up to you, but your choices are limited to:

Neither option is very appealing, which is why I would normally use Kinesis in conjunction with SQS:

SNS executes your function for every notification, and as such has the highest degree of parallelism possible. 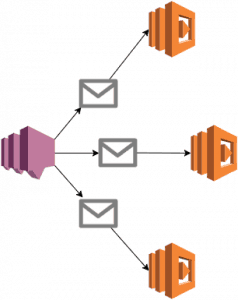 There’s a soft limit of 100 concurrent Lambda executions per region (which you can increase by raising a support ticket), though according to the documentation, AWS might increase the concurrent execution limit on your behalf in order to execute your function at least once per notification. However, as a safety precaution you should still set up CloudWatch alarms on the Throttled metric for your Lambda functions.

With Kinesis (and DynamoDB Streams for that matter), the degree of parallelism is the same as the no. of shards.

If you’re working with SQS today, the degree of parallelism would equal to the no. of poll loops you’re running in your cluster. 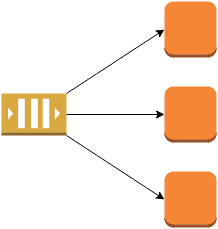 For example, if you’re running a tight poll loop for each core, and you have 3 quad-core EC2 instances in a cluster, then the degree of parallelism would be 3 instances * 4 cores = 12.

Moving forward, if you choose to use recursive Lambda functions to process SQS messages then you can choose the degree of parallelism you want to use.

Which brings us to the next question : if you can use EC2 instances to process SQS messages already, why bother moving to Lambda? I think the cost saving potentials, and the ease and speed of deployment are the main benefits.

If you use the smallest production-ready EC2 class – Linux t2.micro – it will cost you $10.25/month in the eu-west-1 region (Ireland).

Whilst the auto-scaling service is free to use, the default EC2 health checks cannot be relied upon to detect when your application has stopped working. To solve this problem, you’ll typically setup an ELB and use ELB health checks to trigger application level checks to ensure it is still running and processing messages.

A minimum production deployment would therefore cost you $30.75 a month.

A recursive Lambda function running non-stop 24/7 would run for 2678400 seconds a month.

If you assign 128MB to your function, then your monthly cost for Lambda would be $5.61 a month.

Since Lambda’s free tier does not expire 12 months after sign up, this would fall within the free tier of 400000 GB-seconds per month too.

However, there are other aspects to consider:

The exact cost saving from using Lambda for SQS is not as clear cut as I first thought. But at the very least, you have a more granular control of your cost as you scale out.

A recursively executed, 128MB Lambda function would cost $5.61/month, whereas an autoscaled cluster of t2.micro instances would go up in monthly cost $10.25 at a time.

In the IAAS world, the emergence of container technologies has vastly improved the deployment story.

But, as a developer, I now have another set of technologies which I need to come to grips with. The challenge of navigating this fast-changing space and making sensible decisions on a set of overlapping technologies (Kubernetes, Mesos, Nomad, Docker, Rocket, just to name a few) is not an easy one, and the consequence of these decisions will have long lasting impact on your organization.

Don’t get me wrong, I think container technologies are amazing and am excited to see the pace of innovation in that space. But it’s a solution, not the goal, the goal is and has always been to deliver values to users quickly and safely.

Keeping up with all that is happening in the container space is overwhelming, and at times I can’t help but feel that I am trading one set of problems with another.

As a developer, I want to deliver value to my users first and foremost. I want all the benefits container technologies bring, but make their complexities someone else’s problem!

One the best things about AWS Lambda – besides all the reactive programming goodness – is that deployment and scaling becomes Amazon‘s problem.

All I have to do to deploy a new version of my code to AWS Lambda is upload a zip file and hook up my Lambda function to the relevant event sources and it’s job done!

Life becomes so much simpler

With the Serverless framework, things get even easier!

To deploy a new version of your code to staging:

Similarly, to rollback staging to a previous version:

What’s more? Serverless streamlines these processes into a single command!

(p.s. you can find the source code for the experiment here.) 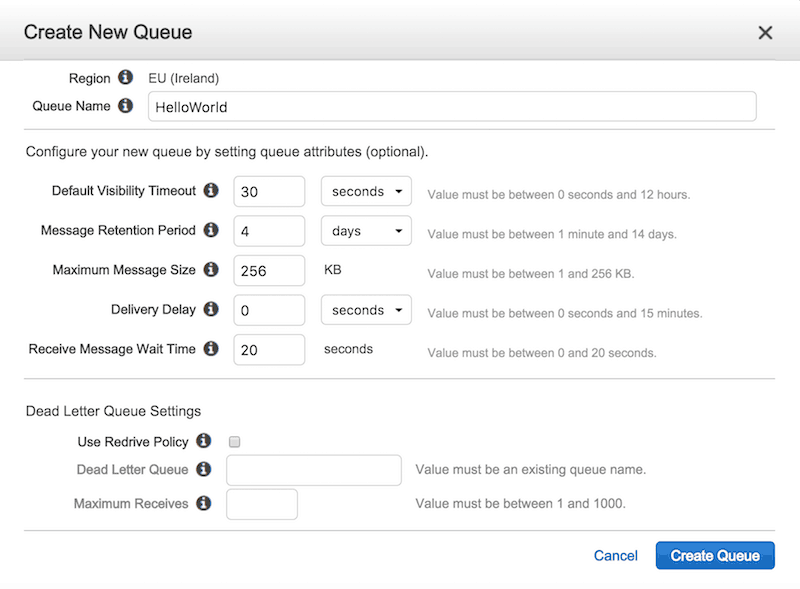 Notice that although we have specified the default visibility timeout and receive message wait time (for long polling) values here, we’ll override them in the ReceiveMessage request later.

Then we’ll create a new Serverless project, and add a function called say-hello. 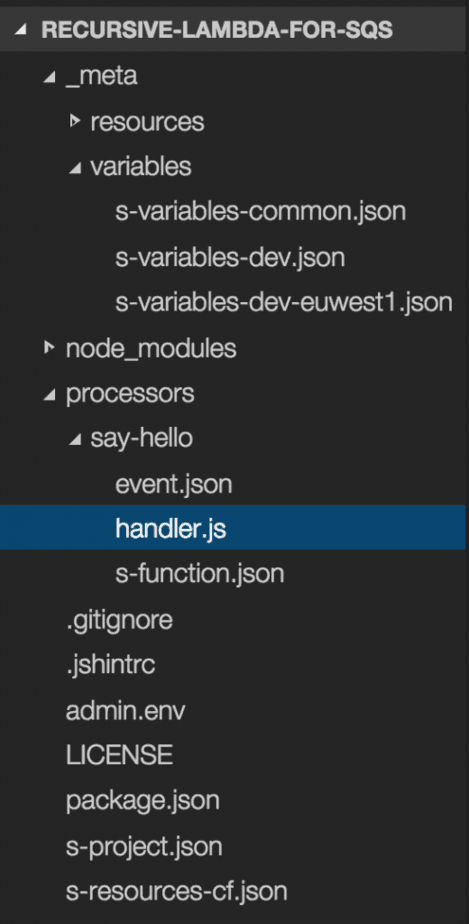 In the handler.js module, let’s add the following.

Notice we’re relying on two environment variables here – QUEUE_URL and FUNC_NAME. Both will be populated by Serverless using values that we specify in s-function.json (to understand how this works, check out Serverless’s documentation).

Next, we’ll write the handler code for our Lambda function. 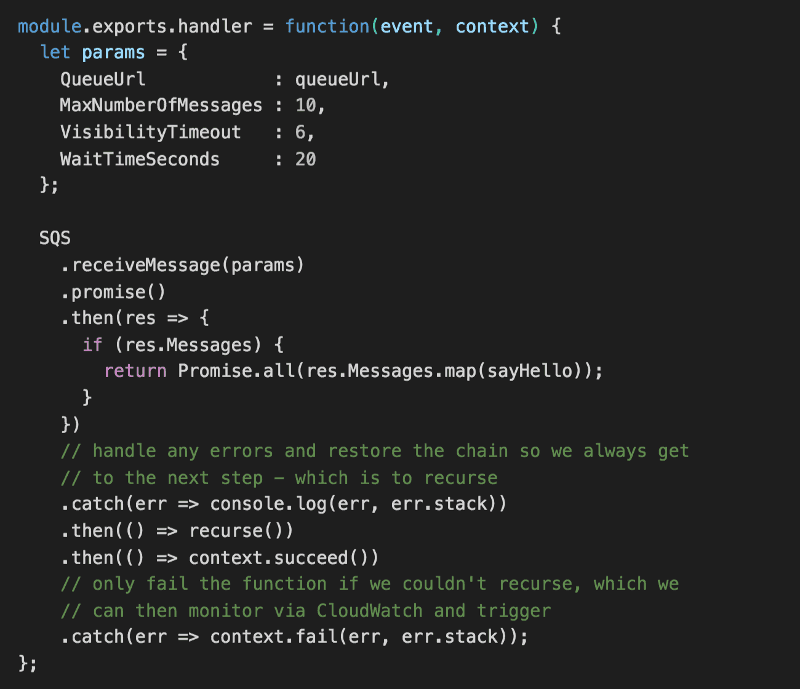 In the sayHello function, we’ll log a message and delete the message in SQS.

One caveat to remember is that, Promise.all will reject immediately if any of the Promises rejects. Which is why I’m handling any error related to deleting the message in SQS here with .catch – it’ll restore the chain rather than allowing the reject to bubble up.

This implementation, however, doesn’t handle errors arising from processing of the message (i.e. logging a message in this case). To do that, you’ll have to wrap the processing logic in a Promise, eg.

Couple of things to note about this function:

You’ll notice that we haven’t provided any values for the two environment variables – QUEUE_URL and FUNC_NAME – we mentioned earlier. That’s because we don’t have the ARN for the Lambda function yet!

Aha, there’s the ARN for our Lambda function!

However, there’s another layer of abstraction we need to address to ensure our environment variables are populated correctly.

In the environment section, add QUEUE_URL and FUNC_NAME like below: 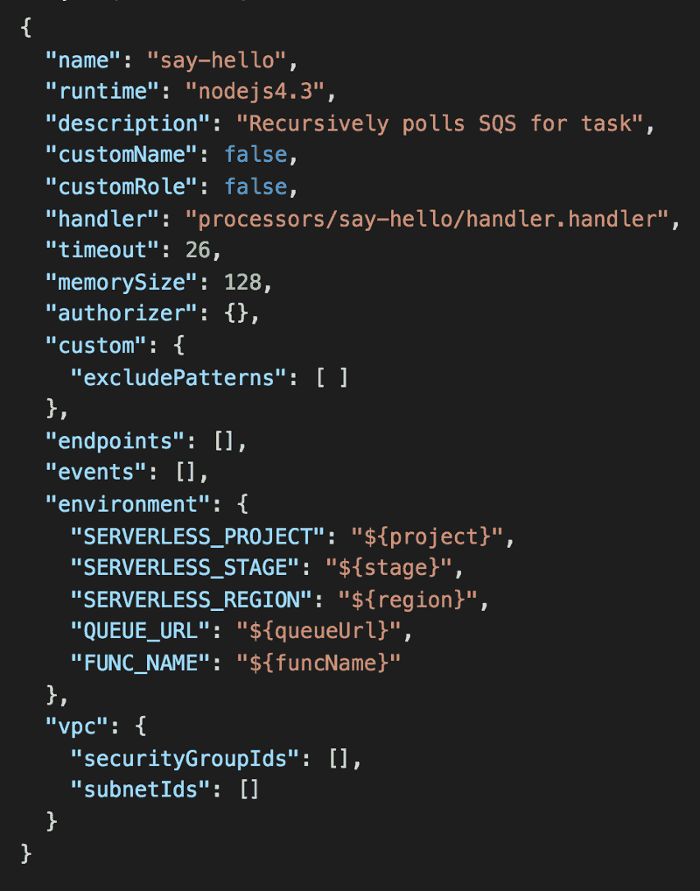 Now do you see how things fit together? 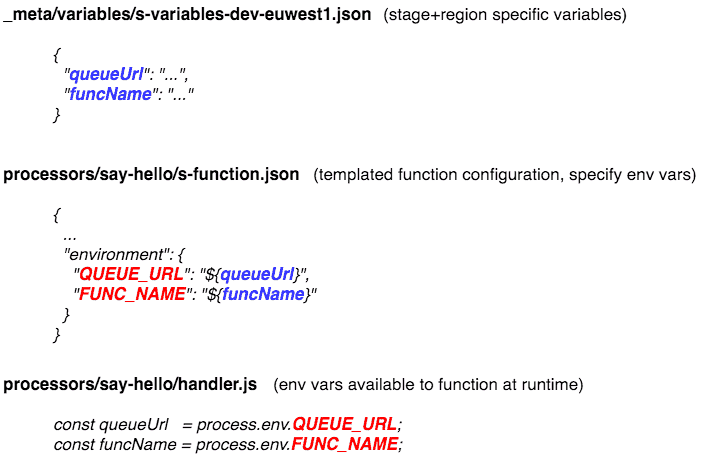 Since we’ve made changes to environment variables, we’ll need to redeploy our Lambda function.

Once your Lambda function is deployed, you can test it from the management console.

See that blue Test button on the top left? Click that.

Since our function doesn’t make use of the incoming payload, you can send it anything.

If you run the function as it stands right now, you’ll get a permission denied error because the IAM role the Lambda service uses to call our function with doesn’t have permissions to use the SQS queue or to invoke a Lambda function.

That’s great, because it tells me I have granular control over what my Lambda functions can do and I can control it using IAM roles.

But we do need to go back to the project and give our function the necessary permissions.

Back in the Serverless project, take a look at s-resources-cf.json in the root directory. This is a templated CloudFormation file that’s used to create the AWS resources for your function, including the execution role for your functions.

Wherever you see ${stage} or ${region}, these will be substituted by variables of the same name under _meta/variables/xxx.json files. Have a read of the Serverless documentation if you wanna dig deeper into how the templating system works.

By default, Serverless creates an execution role that can log to CloudWatch Logs.

You can edit s-resources-cf.json to grant the execution role permissions to use our queue and invoke the function to recurse. Add the following statements:

We can update the existing execution role by deploying the CloudFormation change. To do that with Serverless, run serverless resources deploy (you can also use sls shorthand to save yourself some typing).

If you test the function again, you’ll see in the logs (which you can find in the CloudWatch Logs management console) that the function is running and recursing.

Now, pop over to the SQS management console and select the HelloWorld queue we created earlier. Under the Queue Actions drop down, select Send Message.

In the following popup, you can send a message into the queue. 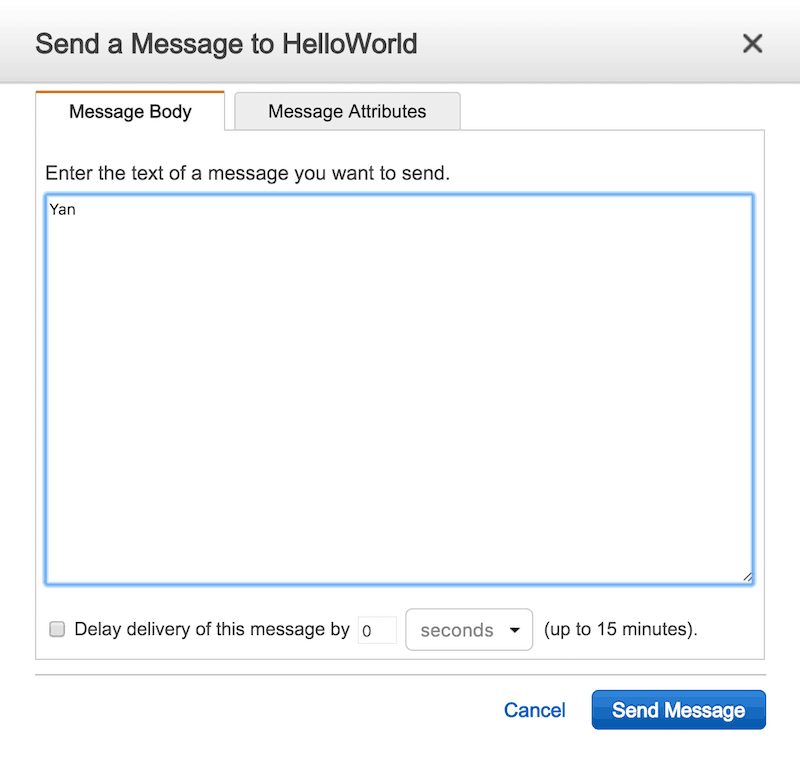 Once the message is sent, you can check the CloudWatch Logs again, and see that message is received and a “Hello, Yan of message ID […]” message was logged.

and voila, our recursive Lambda function is processing SQS messages! 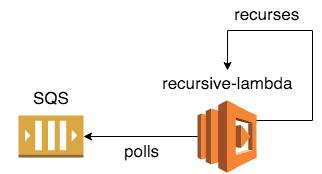 In Part 2, we’ll look at a simple approach to autoscale the no. of concurrent executions of our function, and restart failed functions.