First of all, apologies for taking months to write this up since part 1, I have been extremely busy since joining Yubl. We have done a lot of work with AWS Lambda and I hope to share more of the lessons we have learnt soon, but for now take a look at this slidedeck to get a flavour.

At the end of part 1 we have a recursive Lambda function that will:

however, on its own there are a number of problems:

We can address these concerns with a simple mechanism where:

Depending on how long it takes the processing function to process all its SQS messages – limited by the max 5 min execution time – you can either adjust the threshold accordingly. Alternatively, you can provide another GUID when starting each loop (say, a loop_id?) and extend the loop’s token check to make sure the loop_id associated with its token matches its own.

To implement this mechanism, we will need a few things:

* the SNS topics are required purely because there’s no support for CloudWatch alarms to trigger Lambda functions directly yet. 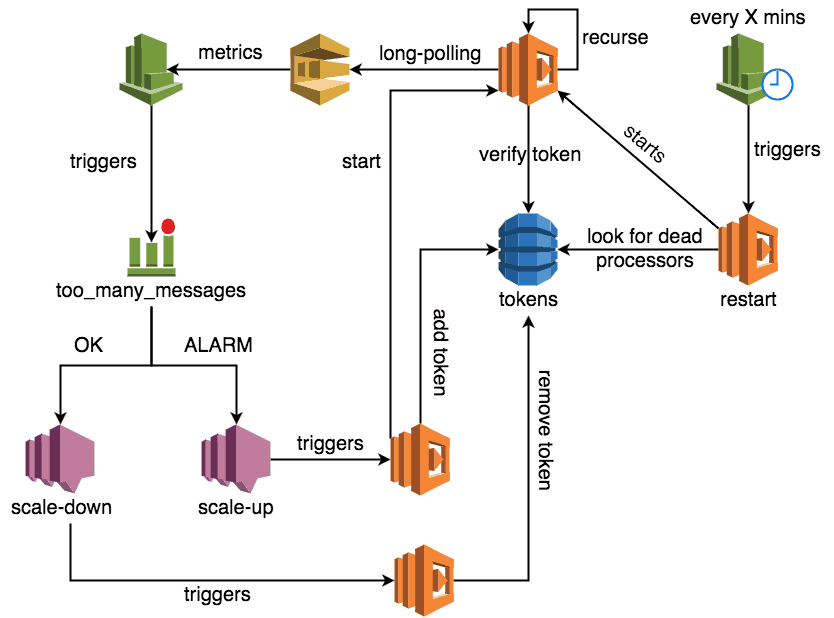 A working code sample is available on github which includes:

I’ll leave you to explore the code sample at your own leisure, and instead touch on a few of the intricacies.

Assuming that your queue is mostly empty as your processing is keeping pace with the rate of new items, then a simple staggered set up should suffice here, for instance:

Each of the alarms would send notification to the relevant SNS topic on ALARM and OK. 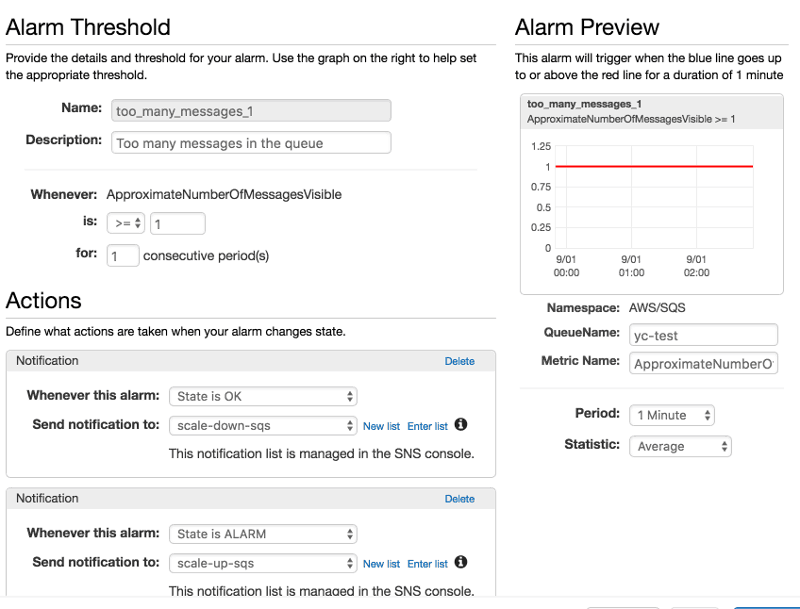 Since there’s no way to message a running Lambda function directly, we need a way to signal it to stop recursing somehow, and this is where the DynamoDB table comes in.

At the start of each recursion, the processing-msg function will check against the table to see if its token still exists. And since the table is also used to record a heartbeat from the function (for the restart function to identify failed recursions), it also needs to upsert the last_used timestamp against the token.

We can combine the two ops in one conditional write, which will fail if the token doesn’t exist, and that error will terminate the loop.

ps. I made the assumption in the sample code that processing the SQS messages is quick, hence why the timeout setting for the process-msg function is 30s (20s long polling + 10s processing) and the restart function’s threshold is a very conservative 2 mins (it can be much shorter even after you take into account the effect of eventual consistency).

If your processing logic can take some time to execute – bear in mind that the max timeout allowed for a Lambda function is 5 mins – then here’s a few options that spring to mind:

Both option 2 & 3 strike me as reasonable approaches, depending on whether your processing logic are expected to always run for some time (eg, involves some batch processing) or only in unlikely scenarios (occasionally slow third-party API calls).

The restart function performs a table scan against the DynamoDB table to look for tokens whose last_used timestamp is either:

By default, a Scan operation in DynamoDB uses eventually consistent read, which can fetch data that are a few seconds old. You can set the ConsistentRead parameter to true; or, be more conservative with your thresholds.

Find out QueueURL from SNS Message

In the s-resources-cf.json file, you might have noticed that the DynamoDB table has the queue URL of the SQS queue as hash key. This is so that we could use the same mechanism to scale up/down & restart processing functions for many queues (see the section below).

But this brings up a new question: “when the scale-up/scale-down functions are called (by CloudWatch Alarms, via SNS), how do we work out which queue we’re dealing with?”

When SNS calls our function, the payload looks something like this:

which contains all the information we need to workout the queue URL for the SQS queue in question.

We’re making an assumption here that the triggered CloudWatch Alarm exist in the same account & region as the scale-up and scale-down functions (which is a pretty safe bet I’d say).

Knowing when NOT to Scale Down

Finally – and these only apply to the scale-down function – there are two things to keep in mind when scaling down:

The first point is easy, just check if the query result contains more than 1 token.

The second point is necessary because CloudWatch Alarms have 3 states – OK, INSUFFICIENT_DATA and ALARM – and we only want to scale down when transitioned from ALARM => OK.

As you can see, there is a fair bit of set up involved. It’d be a waste if we have to do the same for every SQS queue we want to process.

Fortunately, given the current set up there’s nothing stopping you from using the same infrastructure to manage multiple queues:

Firstly, you’d need to implement additional configuration so that given a queue URL you can work out which Lambda function to invoke to process messages from that queue.

Secondly, you need to decide between:

Depending on the volume of messages you’re dealing with, option 1 has a cost consideration given there’s a Lambda invocation per message (in addition to the polling function which is running non-stop).

So that’s it folks, it’s a pretty long post and I hope you find the ideas here useful. If you’ve got any feedbacks or suggestions do feel free to leave them in the comments section below.