Broadly speaking the growth of your town (and thereby the advancement of your level) is governed by two factors:

So now let’s take a closer look at each of these and grow your town as fast as you can!

The only way for your town to grow is by attracting more citizens to live in it, and the only way for new citizens to arrive in your town is via a transport. The bus is the only transport available in the game at this point in time, and you need bus stops in order to receive the new citizens and they will stay at your bus stops until you have residential units to house them (see below).

There are a number of things you need to know about the bus stop before we dwell into it in more detail:

The biggest constraint on your growth early on in the game is likely to be the number of citizens you get per bus arrival as you are only allowed 4 arrivals per bus stop per day. So if you are getting 15 citizens on each bus then you’re going to be limited to 60 new citizens each day.

The quickest and easiest way to boost your growth is by buying another bus stop, but this costs 25 cash (the rare currency in the game which you earn one every time you level up) so unless you can wait until level 25 you might have to fund the purchase with real money:

Each bus stop is allowed 4 arrivals, getting that second bus stop will immediately double the number of citizens you get each day, making it possibly the most important purchase you’d make in the game! As transports are ONLY purchasable with cash, so if you are going to save those hard earned cash for something good, consider saving them for a bus stop.

Whilst buying additional bus stops can help solve most of your problems related to the growth of your town it’s often an expensive solution and it’s not the only solution available to you.

The number of new citizens per day is derived by a simple equation:

You’ve already seen how buying bus stops tackles the problem by giving you additional bus arrivals, you can tackle the other half of the equation by simply building more attractions in your town!

The number of new citizens you get on each bus arrival depends on 3 things:

Whilst you can’t do much about the effect your level and population has, you can significantly boost the number of new citizens per bus arrival by adding a few attractions. Under the Attraction menu, you can see the number of additional new citizens you will be able to attract to your town per day as the result of building the attraction:

Attractions also bring in daily income like residential units but should never be considered the main source of your income as the rate and amount of the coins they are able to generate will not even be able to sustain the additional growth they bring! Refer to part 2 of my guide on how to earn coins faster.

As with everything you build in the game, it’s important to consider the efficiency of the unit. Take the ‘Sports Ground‘ and the ‘Donut Hut‘ for instance:

Whilst it’s plain to see that you’d be able to attract a lot more people with the Sports Ground, consider the following:

So all of a sudden the Donut Hut appears the far superior unit both in terms of new citizens per cost and per square! From a purely optimization point of view you would sooner build a fleet of donut huts than build a single sports ground.

BUT, aesthetically, a donut hut cluster in the middle of your town is nothing short of an abomination..

Personally I think every town needs a sports ground and would happily take the hit on the number of new citizens in favour of a more aesthetically pleasing town!

Attracting people to your town is only half the story, you still have to give them homes to live in and that means one thing in SuperFunTown – building residential units.

Under the build menu, you can see the capacity of each type of residential unit, i.e. how many people can live in that unit:

As ever, when it comes to deciding which unit to build you need to consider the per square efficiency of that unit. This is particularly important with residential units (even more so than attractions and shops) because you need LOTS of them and there’s just no way around it! 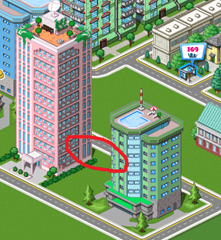 One other thing to keep in mind when building residential units is placement. As you know, residential units need to be placed next to roads in order for them to be considered ‘active‘ and since you can only build roads a certain distance (equal to the width of a road tile) apart, this means some units lend themselves better to being placed inside a ‘road grid’ like the one I’ve shown on the left.

I’ve circled in the image on the left the space that are wasted when the ‘Garden Heights‘ unit is placed into a road grid which otherwise fits less efficient ‘Pool Plaza‘ unit. Unfortunately, this problem that you’re likely to come up against time and time again as you progress through the game and have to replace existing residential units with more efficient ones to make room for further growth.

Luckily, this problem can be easily solved by using pavements to connect and activate these units instead of roads :-) Pavements are in general a good alternative to roads anyway as they take up less space and can be placed anywhere in your town.

That’s it from me on how to grow your town quickly, good luck building!

Other Parts in the SuperFunTown Guide: