I talked about the XML and JSON serialization of F# types in a previous post, and since then F# 3.0 has been released and a new [CLIMutable] was quietly added amidst the hype surrounding the awesome type providers!

When applied to a F# record type, the CLIMutable attribute tells the F# compiler to generate a default parameterless constructor as well as property getters and setters so that when working with the record type from other .Net languages it’ll appear as a pretty standard, mutable CLI type that you’d expect.

However, when working in F#, the normal rules as far as record types are concerned still apply – immutability by default, pattern matching, cloning using the with keyword, etc.

For a simple record type Person, let’s have a look at the compile code with and without the CLIMutable attribute:

Without the CLIMutable attribute, this is how the record type is normally compiled: 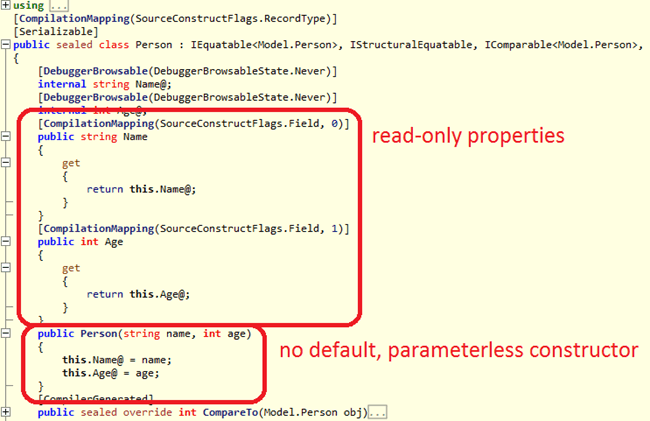 With the CLIMutable attribute applied, things look a lot different: 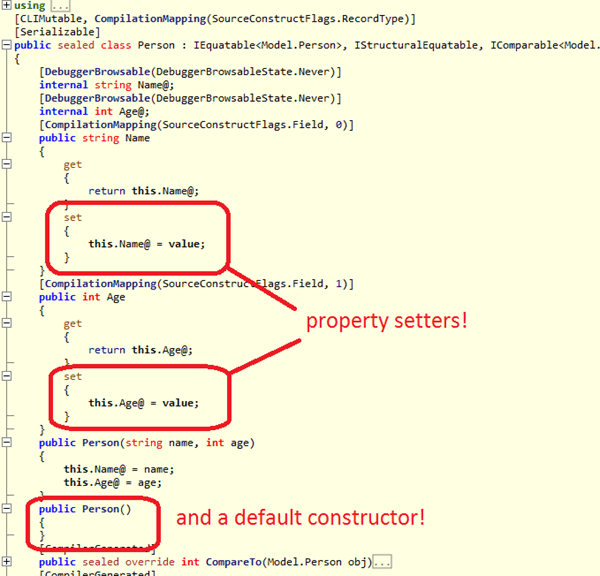 That’s all well and good, but why is this useful you might ask?

Because many serializers, such as the BCL’s XmlSerializer (as well as other serializers available in the open source space) only work with types that has a default constructor and contains property setters.

Unlike the DataContractSerializer which only requires a type to be decorated with a Serializable or DataContract attribute, the XmlSerializer on the other hand, also requires the type to define a parameterless constructor.

Whilst both serializers generate XML outputs, DataContractSerializer is intended for marshalling data (that conforms to a ‘contract’) for transportation over the wire and therefore less concerned with readability of its output and offers little option for you to customize the generated XML. It’s therefore quite happy to spit out rather unreadable XML for our Person record type above:

Meanwhile, in the land of the XmlSerializer, its sole purpose of existence is to generate XML and offers a platoon of options to help ensure its output meets your functional and aesthetic needs. By default it’ll generate nice, indented output for our CLIMutable version of Person record type:

In addition, you can customize the XML output using the normal XML-related attributes: 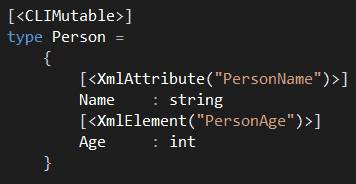 Of the OSS JSON serializers I benchmark regularly, JSON.Net (v4.5.11 tested) works with both normal and CLIMutable record types from F#. ServiceStack.Text (v3.9.37 tested) doesn’t work with ‘vanilla’ record types on deserialization (fields are left with default values), but you can workaround by making the fields mutable or add the CLIMutable attribute to the type.

I hope this proves to be useful to you, and if like us you have a lot of C# code hanging around just to get pretty XML out of your F# record types, dare I say it’s about to throw away those C# code!