A couple of weeks earlier, Amazon announced support for Local Secondary Indexes (LSI) for DynamoDB. You can now perform fast, efficient queries against DynamoDB tables using attributes that are not part of the existing Hash and Range key model without resorting to the use of scans.

As a result to the new feature the DynamoDB query API has also gone through some changes, as did the AWSSDK for .Net. From version 1.5.18.0 onwards, there’s a new top level namespace Amazon.DynamoDBv2 which contains a mirror set of types to those under the original Amazon.DynamoDB namespace, albeit with minor changes to support the new LSI feature.

Due to the changes in the underlying AWSSDK, I have decided to make some changes to the query syntax supported by DynamoDB.SQL too – namely, to remove the need for the special keywords @HashKey and @RangeKey and instead allow you to use the attributes names for your hash and range keys.

For example, given a table like the one outlined in the DynamoDB docs: 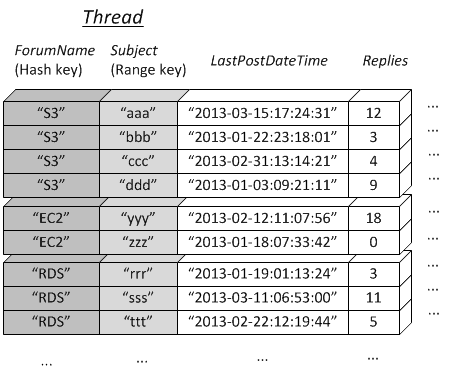 To write a query to find all subjects starting with “a” in the “S3” forum, you would previously write:

In the new version of DynamoDB.SQL, you would write the following instead:

The syntax for scans on the other hand, has remained the same in both the new and the old API.

You can specify that a query should use a Local Secondary Index (LSI) by using the Index option in the WITH clause.

For example, given a Thread table and an index LastPostIndex, as outlined in the DynamoDB docs: 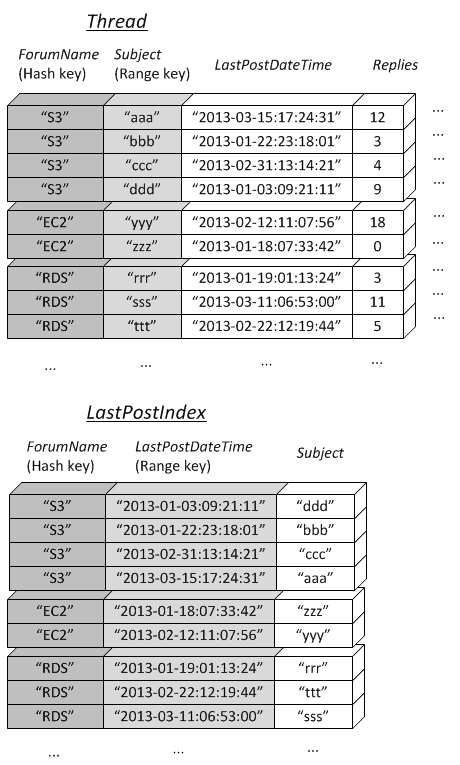 To find all the posts in the “S3” forum since the 1st May 2013, you can write the query as following:

The WITH clause is where you specify optional query parameters, such as NoConsistentRead, and PageSize. (please refer to the Getting Started guide on available query parameters).

The Index option allows you to specify the name of the index, in this case that’s “LastPostIndex”, and a boolean flag to specify whether or not all attributes should be returned.

For the above query, because we’re asking for all attributes to be sent back with *, and that attributes such as Replies are not projected into the index, they will be fetched (automatically performed by DynamoDB) from the main table at additional consumed capacity units.

On the other hand, if you want only the projected attributes back from the index, we can tweak the query slightly:

In which case, only ForumName, LastPostDateTime and Subject will be returned by the query.

Finally, if you are interested in a specific set of attributes, you can also specify them in the SELECT clause:

Querying with an Index attribute in DynamoDB.SQL