Nowadays you see plenty of stories about Continuous Integration, Continuous Delivery and Continuous Deployment on the web, and it’s great to see that the industry is moving in this direction, with more and more focus on automation rather than hiring humans to do a job that machines are so much better at.

But, most of these stories are also not very interesting because they tend to revolve around MVC-based web sites that controls both the server and the client (since the client is just the server-generated HTML) and there’s really no synchronization or backward compatibility issues between the server and the client. It’s a great place to be to not have those problems, but they are real concerns for us for reasons we’ll go into shortly.

One notable exception is the continuous deployment story from Netflix, which Carl Quinn also talked about as part of an overview of the Netflix architecture in this presentation. 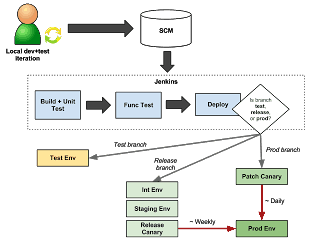 For me, there are a number of things that make the Netflix continuous deployment story interesting and worth studying: 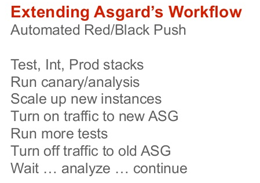 I’ve not heard any updates yet, but I’m very interested to see how the Netflix deployment pipeline has changed over the last 12 months, especially now that Docker has become widely accepted in the DevOps community. I wonder if it’s a viable alternative to baking AMIs and instead Aminator can be adopted (and renamed since it’s no longer baking AMIs) to bake Docker images instead which can then be fetched and deployed from a private repository.

If you have see any recent talks/posts that provides more up-to-date information, please feel free to share in the comments.

One interesting omission from all the Netflix articles and talks I have found so far has been how they manage backward compatibility issues between their server and client. One would assume that it must be an issue that comes up regularly whenever you introduce a big new feature or breaking changes to your API and you are not able to do a synchronous, controlled update to all your clients.

To illustrate a simple scenario that we run into regularly, let’s suppose that in a client-server setup:

In the scenario outlined above, the server changes must be deployed before reviewers from Apple open up the submitted build or else they will find an unusable/unstable application that they’ll no doubt fail and put you back to square one.

Additionally, after the new version has been approved and you have marked it as available in the AppStore, it takes up to a further 4 hours before the change is propagated through the AppStore globally.

This means your new server code has to be backward compatible with the existing (version 1.0) client.

In our case, we currently operate a number of social games on Facebook and mobile (both iOS and Android devices) and each game has a complete and independent ecosystem of backend services that support all its client platforms.

Backward compatibility is an important issue for us because of scenarios such as the one above, which is further complicated by the involvement of other app stores and platforms such as Google Play and Amazon App Store.

We also found through experience that every time we force our players to update the game on their mobile devices we alienate and anger a fair chunk of our player base who will leave the game for good and occasionally leave harsh reviews along the way. Which is why even though we have the capability to force players to update, it’s a capability that we use only as a last resort. The implication being that in practice you can have many versions of clients all accessing the same backend service which has to maintain backward compatibility all the way through.

Currently, most of our games follow this basic deployment flow:

The steps involved in releasing to production follow the basic principles of Blue-Green Deployment and although it helps eliminate downtime (since we are pushing out changes in the background whilst keeping the service running so there is no visible disruption from the client’s point-of-view) it does nothing to eliminate or reduce the need for maintaining backward compatibility.

Instead, we diligently manage backward compatibility via a combination of careful planning, communication, domain expertise and testing. Whilst it has served us well enough so far it’s hardly fool-proof, not to mention the amount of coordinated efforts required and the extra complexity it introduces to our codebase.

Having considered going down the API versioning route and the maintainability implications we decided to look for a different way, which is how we ended up with a variant of Netflix’s Red-Black deployment approach we internally refer to as..

Our Red-White Push approach takes advantage of our existing discovery mechanism whereby the client authenticates itself against a client-specific endpoint along with the client build version.

Based on the client type and version the discovery service routes the client to the corresponding cluster of game servers. 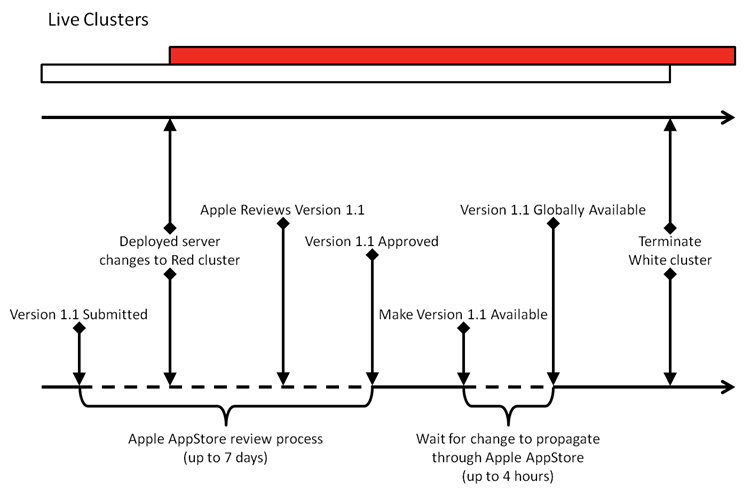 The key differences are:

Despite what the name suggests, you are not actually limited to only red and white clusters. Furthermore, you can still use the aforementioned Blue-Green Deployment for releases that doesn’t introduce breaking changes (and therefore require synchronized updates to both client and server).

We’re still a long way from where we want to be and there are still lots of things in our release process that need to be improved and automated, but we have come a long way from even 12 months ago.

As one of my ex-colleagues said:

“Releases are not exciting anymore”

and that is the point – making releases non-events through automation.

Netflix – How we use Zuul at Netflix

Continuous Delivery at Netflix – From Code to the Monkeys