So OSCON came and went, and whilst I haven’t seen the recording for any of the sessions, the keynotes (and a bunch of interviews) are available on YouTube.

Unlike most conferences, the OSCON keynotes are really short (average 10-15 mins each) and having watched all the published keynote sessions here are my top picks.

I’m a big fan of Simon’s work on value chain mapping, and his OSCON 2014 keynote was one of the most memorable talks for me last year. 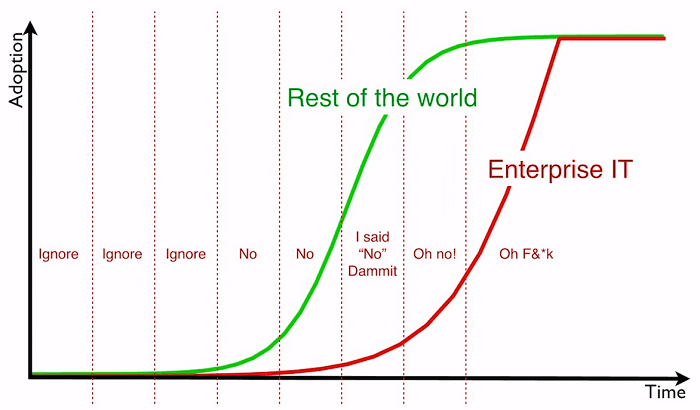 Whereas high-level situational awareness environments (e.g. military combat) are context specific, you have positions and movements and usually employ some form of visual reasoning. 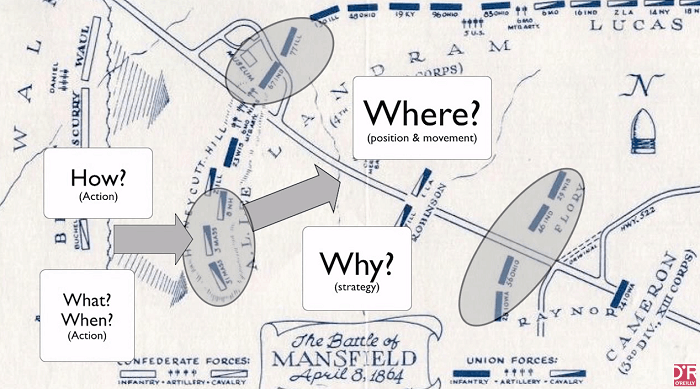 Military actions are driven by your situational awareness of the where and why, but in Business we have a tyranny of actions.

and this is where Simon’s value chain mapping comes in. With maps, you can add positions to your components based on the values they provide, as well as movement as they evolve from the unchartered world (chaotic, uncertain, unpredictable, etc.) to become industrialized. 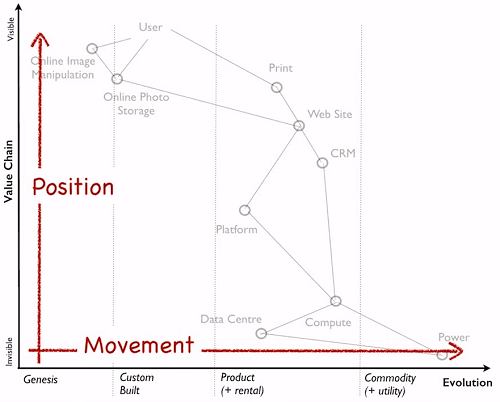 In terms of methodology, there’s no one size that fits all.

Agil, XP and Scrum are very good on the left side (the unchartered world), particularly when you want to reduce the cost of change.

On the right side, as things become industrialized, you want to reduce the cost of deviation and Six Sigma is good.

In the middle where you want to build a product, lean is particularly strong. 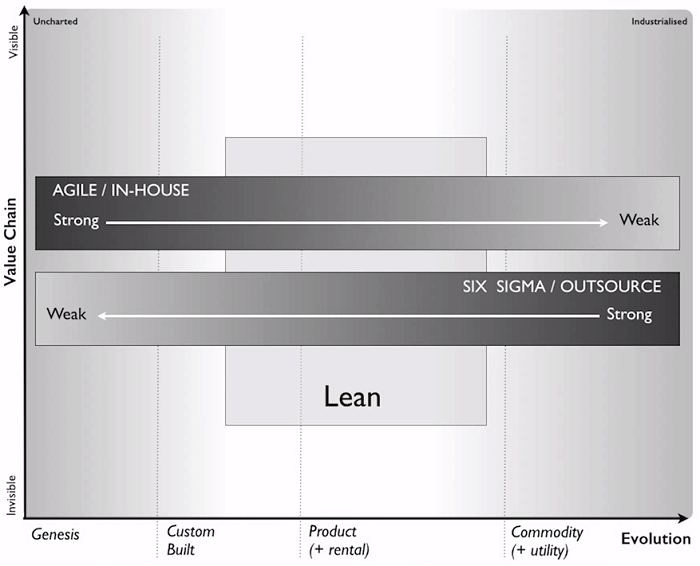 If you take a large scale project, rather than having a one-size-fits-all methodology, you can employ different methodologies based on where that component is in its evolution. For developers, this is no different to the arguments for polyglot programming, or polyglot persistence, because no single language or database is good for all the problems we have to solve.

Why should the way we work be any different? 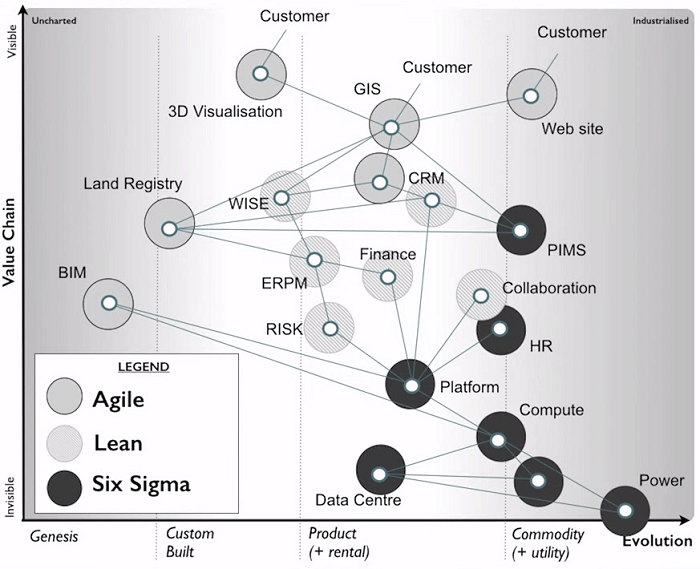 By overlapping the value chain maps for different areas of the business you can start to identify overlaps within the organization, and a snippet from his most recent post shed some horrifying light on the amount of duplication that exists:

…To date, the worst example I know of duplication is one large global company that has 380 customised versions of the same ERP system doing exactly the same process…

The US air force discovered that, as people came up with new ideas they tend to add features to that idea and made it better (and more complex); they then added even more features and made the idea so complex it’s completely useless to anyone, and that’s approximately where they shipped it. (for regular readers of this blog, you would probably have read about this obsession of features many times before)

So Lt. Col. Dan Ward came up with FIST (Fast, Inexpensive, Simple and Tiny), which in his own words:

…FIST stands for Fast, Inexpensive, Simple and Tiny. It’s a term I use to describe a particular approach to acquisitions and system development. As you might guess, it involves using a small team of talented people, a tight budget, a short schedule and adhering to a particular set of principles and practices…

in other words, small is beautiful, and it’s a theme that we have seen repeatedly – be it microservices, or Amazon’s two-pizza teams, etc.

And as you impose constraints on the teams – tight budget, short schedule – you encourage creativity and innovation from the teams (something that Kevlin Henney also talked about at length during his Joy of Coding closing keynote).

However, even with small teams, you still have this problem that things need to evolve. Fortunately we have a solution to that too, in what is known as the three party system where you have: 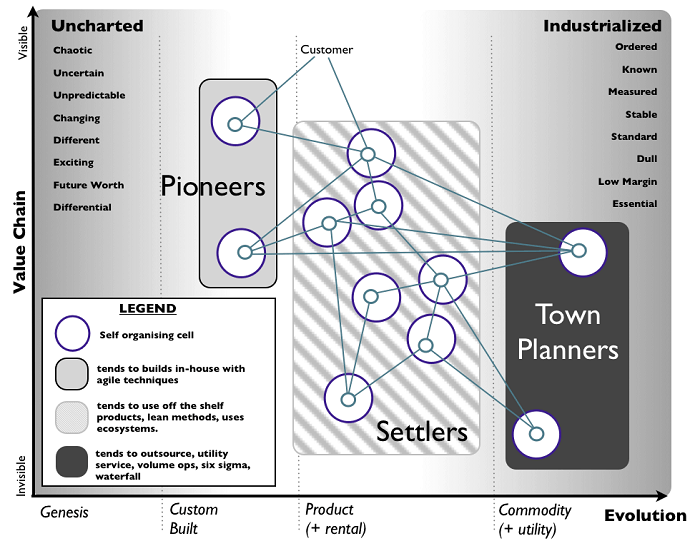 Once you have a map, you can also start to play games and anticipate change. Or better yet, you can manipulate the map.

You can accelerate the pace of evolution by using open practices – open source, open API, etc. Or you can slow the process down by using patents, or FUD.

The key thing is that, once you have a map, you can see where things are moving and visually reason about why you should attack one component over another. And that’s how you can turn business into situational awareness first, and actions after.

As things move from product to commodity, they enable a new generation of services to spawn up (wonder), but they also cause death to organizations stuck behind the inertia barrier (death). 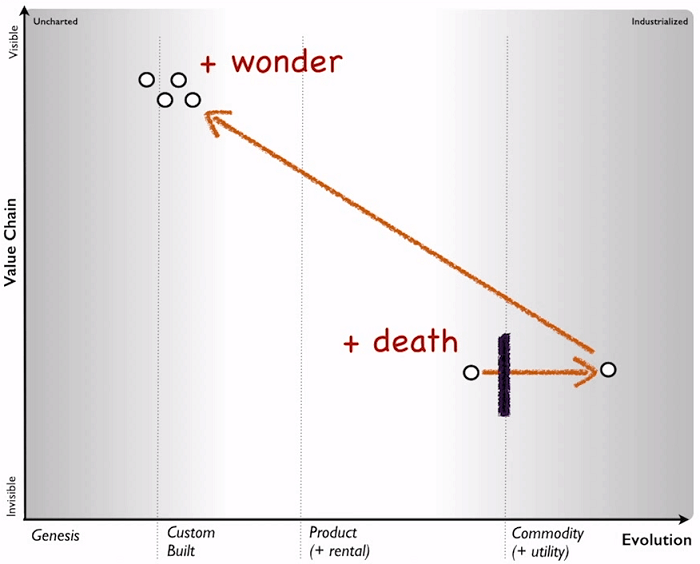 This is a pattern that Simon calls War, Peace and Wonder, and is identifiable through weak signal detection and see roughly when these changes will likely happen. 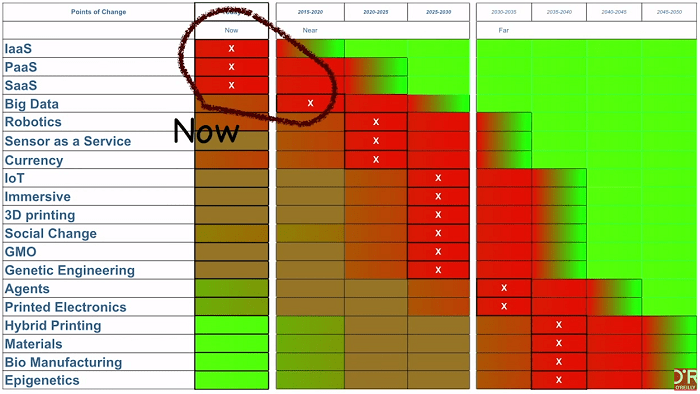 I hope you enjoyed Simon’s talk, his blog has much more information and goes into each of these topics in a greater deal of detail. If you follow him on Twitter (@swardley) he also post regular titbits of wisdom, which I have started to collect.

I don’t like the term “software architecture” as it summons up these images of some senior person in an organization who’s setting rules and standards on how software should be written but having actually written any software for maybe 10 or 20 years. These architects, Joel Spolsky use the term “architecture astronauts”, often cause a lot of problems in software projects. So the whole term “architect” and “architecture” has a kinda nasty taste to it.

For me, the key points from this talk are:

Conway’s law has been a trendy topic at conferences this past 12 months, and everyone is basically singing the same tune – apply Conway’s law in reverse and organize your communication structure to fit the software you want to build.

OSCON is coming to Europe!

At long last, we’ll see a version of OSCON in Europe this year, on 26th-28th October in Amsterdam. Some pretty cool tech companies will be represented there – GitHub, DataStax, Google, ThoughtWorks, PayPal, Heroku and Spotify to name a few, and of course, our very own Gamesys

I will giving a talk on the work I did with Neo4j a while back, which you can read all about in this post.

p.s. Rachel Reese (of Jet) is coming over from the US and talking about building reactive service with F#!

1 thought on “My picks from OSCON keynotes”