In Here Be Monsters, we have a MMORPG that is content-heavy with over:

and since the contents are highly connected, it makes balancing the game a rather interesting and challenging problem for our small team behind the project.

Consider a simple example involving the Camouflage Trap, which is one of the very first traps you’ll make. It’s made from a number of ingredients, each can be:

Now, suppose you want to raise the price of basic ingredients such as Water, that increase needs to propagate all the way through the chain. 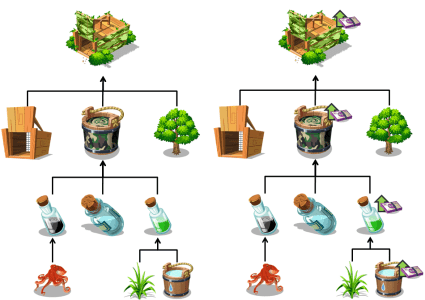 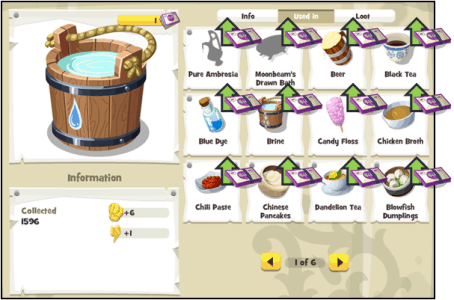 There’s a huge knock-on effect here. Failing to address these knock-on effects will create arbitrage opportunities in your economy for players to exploit. They will be able to mine coins by buying and selling items and will therefore have less need to make real-money purchases with us.

As a game designer, whenever you want to make a change you are faced with this huge uncertainty because of the hidden knock-on effects that you don’t see. 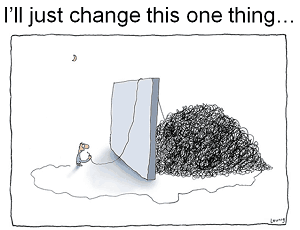 It’s a complexity that we have to manage, but managing this complexity by hand is:

Instead, we opted for a more automated process whereby every item’s intrinsic value in the game can be evaluated based on the values of its inputs (e.g. baits for monsters, ingredients for crafted items, etc.). The amount of time involved, and your chance of success is also taken into account. We can then use the intrinsic value of an item to drive or quantify other less tangible aspects of the game’s model.

This is where Neo4j comes in.

One of the main challenges that came up in our effort to automate the economic balancing was to understand the complex relationships between items, quests, achievements, as well as locations and activities that can be performed against/with specific items at specific locations.

Take Bigfoot as an example, from his almanac page in the game: 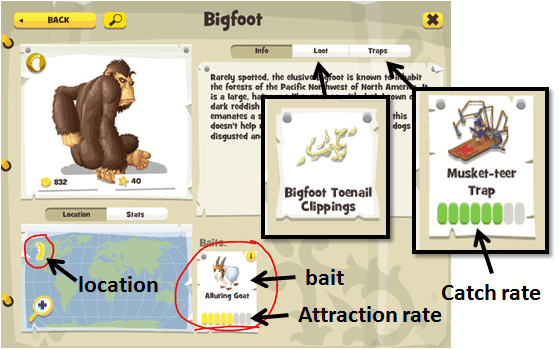 We can see that to catch the Bigfoot you need to consider:

We can model all the information we see on this screen as a graph in Neo4j: 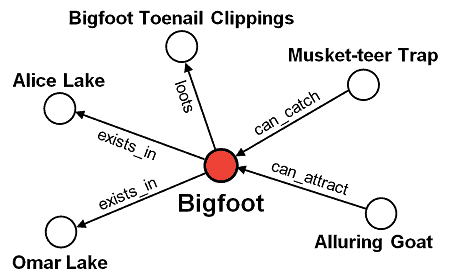 Additionally, each node and edge can have an arbitrary set of properties.

For instance, Bigfoot and the Musket-teer Trap will have their stats. The lootsrelationship that exists between Bigfoot and his loot will also specify the chance of him dropping the loot. 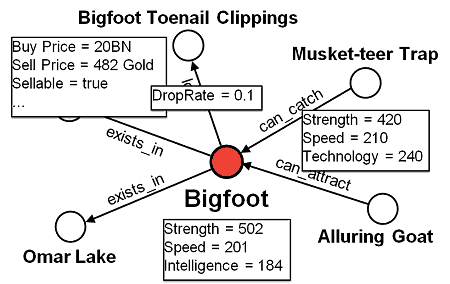 Looking beyond the immediate connections to Bigfoot, the Alluring Goat and Musket-teer Trap each have numerous connections of their own.

To make the Alluring Goat, you need to gather: 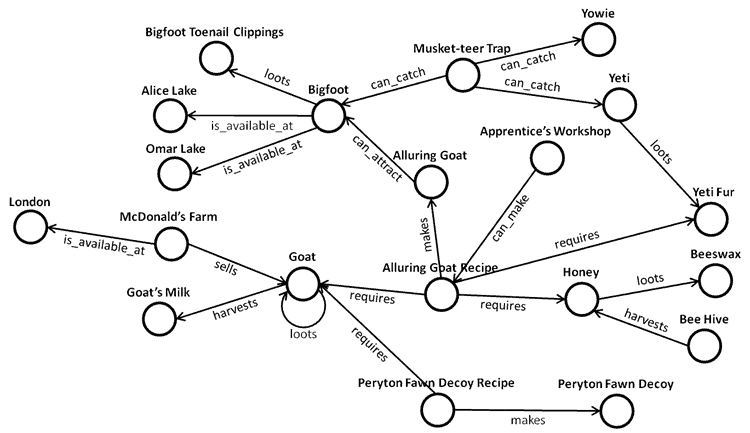 This diagram illustrates the highly connected and complex nature of the data we’re dealing with – the result of us making a game where everything you can do and every item you find has a purpose and can be used for something else.

It is also by no means an unconnected subset of the overall graph. For simplicity sake I have omitted many types of relationships and connected nodes.

Visualizing the 8,000+ nodes and around 40,000+ edges in Gephi, where the colour and size of the nodes represent the number of connections they have, this is what the internal data model for Here Be Monsters look like: 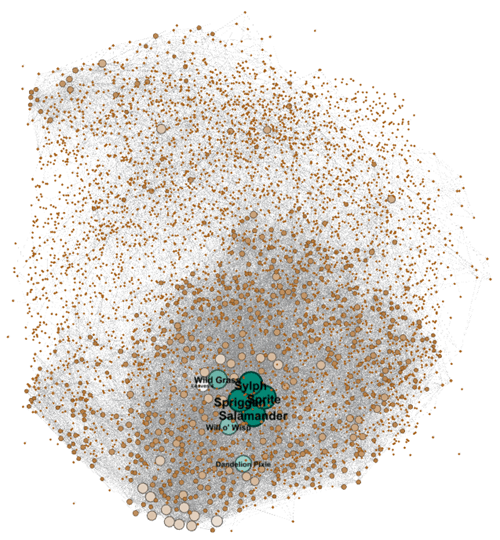 As you can see, the degree of connectedness varies greatly. For common low-level monsters such as Sylph, Spriggan, Sprite and Salamander, they are each connected to no less than 300 locations, traps and items. 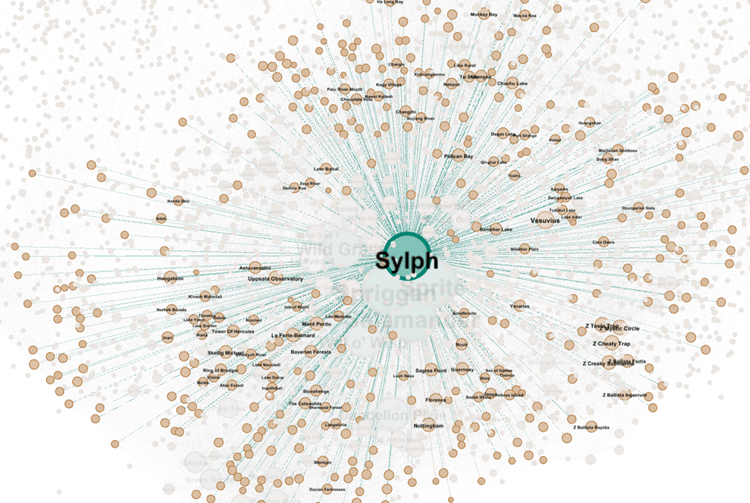 Similarly, for common ingredients such as Salt, it can be found through many items (e.g. most fish drop Seaweed and Salt as loot when you catch them) and is used in many recipes – Pastry, Pizza Base, Ketchup to name a few. 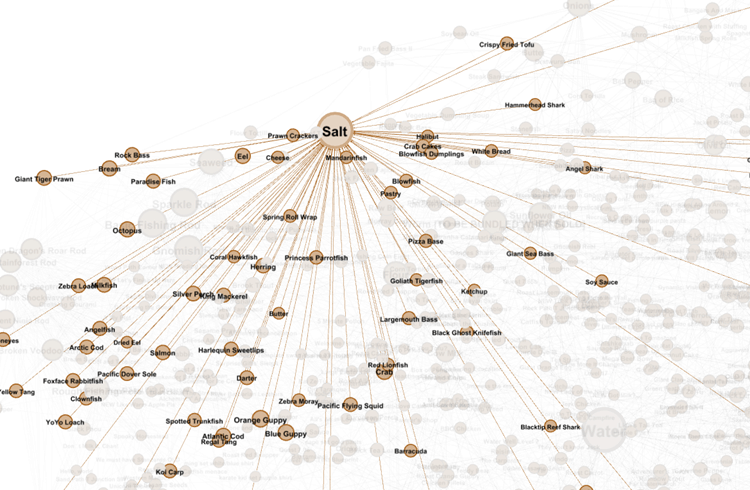 With the internal data model captured as a graph in Neo4j, we were able to ask some interesting questions that would have been difficult or impossible to answer otherwise.

In the earlier pricing example with Water and Camouflage Trap, the key challenge is to be able to understand the impact of change. This is a very similar problem to the ones you face in derivative pricing in Finance.

If you take White Bread as an example, to work out the blast radius of a price change, let’s look at the relationships that exist between an item and a recipe. 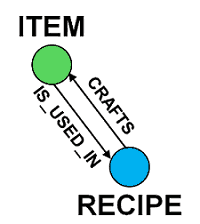 To find all the items that are made from White Bread, directly or indirectly, we can run the following Cypher (which is the built-in query language for Neo4j) query against our Neo4j database:

Couple of things to note from this query.

Running this query yields the following result, where the purple nodes are items and red nodes are recipes. 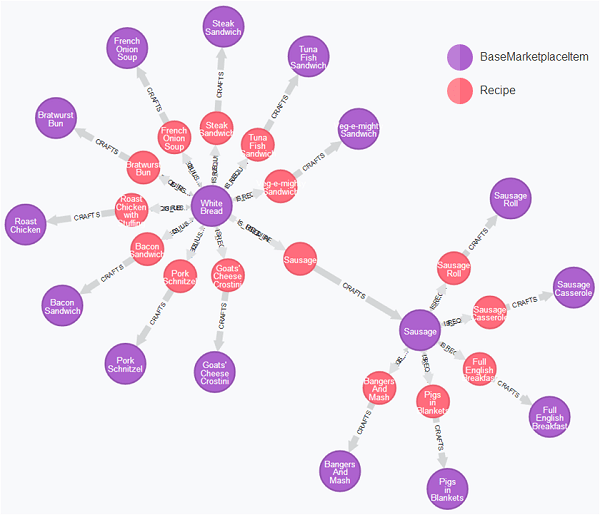 From this graph we can see that White Bread is used directly in 10 recipes, and then indirectly (virtue of being an ingredient for making Sausage) in a further 5. If we were to change the price of White Bread, all 15 of these items will need to have their prices adjusted based on the number of White Bread required to make them.

Not all items can be priced as derivatives of others. Some need to be priced based on their scarcity in the world, such as the fruits that you can forage from fruit trees you find on your travels. 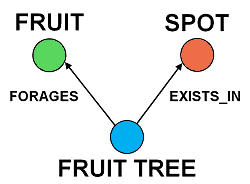 To find out how scarcely available Durian and Dragonfruit is, we can use the following Cypher query:

Again, we’re simply pattern matching against our graph using the pattern node<-[relationship1]-node-[relationship2]->node. The expressive power of Cypher lies in the ability to take our relationship diagram above and translate it like-for-like into an executable query.

You might also noticed that I’m not filtering any of the nodes by type here. This is because I know those relationships exist only between the specified types of nodes, hence it’s safe for me to omit them. 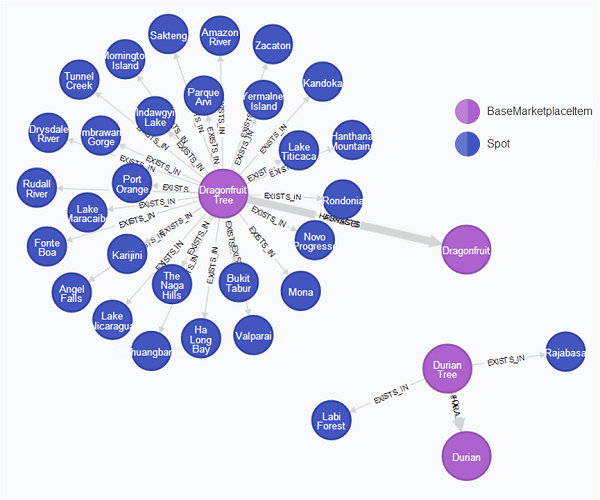 Immediately, you can see that Dragonfruit Tree is much more readily available in the world compared to Durian Tree. However, you still need to consider:

Taking all these factors into account, we can set prices for Durian and Dragonfruit which reflects their scarcity in the world.

Some quests require specific items to complete. For instance, an NPC might ask you to fetch an item from Bob in Cambridge, or find some feature under a rock somewhere, or catch a Griffin and get a Griffin Egg as loot.

On the other hand, completing a quest can sometimes award you items as well. If the quest is part of a quest line then you will also unlock follow-up quests too, so there is a self-recursive relationship there. 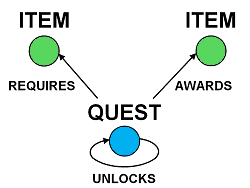 To answer questions such as

What comes after the Year of the Horse quest?

you can use a simple Cypher query like the one below. 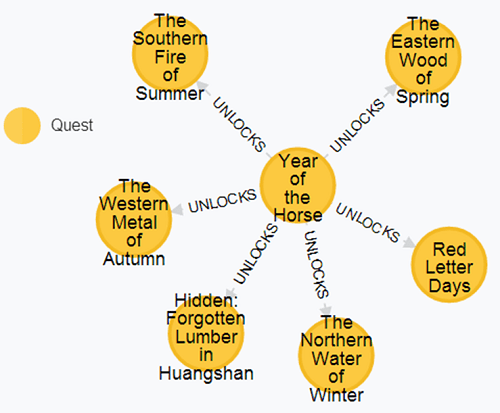 From the resulting graph, you can quickly see the quests that are unlocked by completing the Year of the Horse quest.

In fact, if you connect all the quests in the game then you’ll end up with the following. 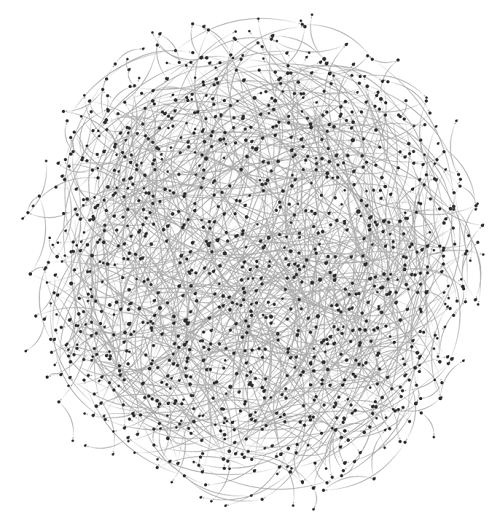 No wonder our game designers need a hand working with the data!

But, just being able to work out how quests are connected to each other and visualize them is not all that exciting or useful. We can do much more.

With our price model in full swing, we are able to:

Since the price of an item reflects the difficulty in obtaining it, we can make use of the relationships between quests and items to “price” quests the same way – i.e. the more expensive the items a quest require, the more difficult that quest is to complete.

From there, you can establish simple rules such as:

Finally, monster trapping is a big part of the game as its name suggests. As mentioned earlier, to catch a monster you need the right combination of bait and trap.

To catch a monster, sometimes you have to first catch a lower level monster; get its loot; and use the loot to make the bait for the monster you want to catch. Using the following relationships you can place the monsters into a hierarchy. 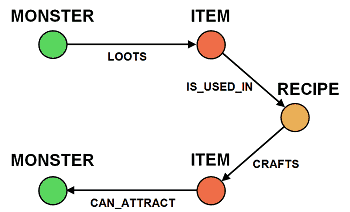 Which can be translated into the following Cypher query:

Again, see how it mirrors our diagram?

Suppose we are on a quest to catch Bigfoot, we can use this query to identify the monsters we have to catch first in order to get the ingredients to make the bait for Bigfoot. The query yields the following result where the purple nodes are monsters and the red node in the middle is the recipe for crafting the Alluring Goat. 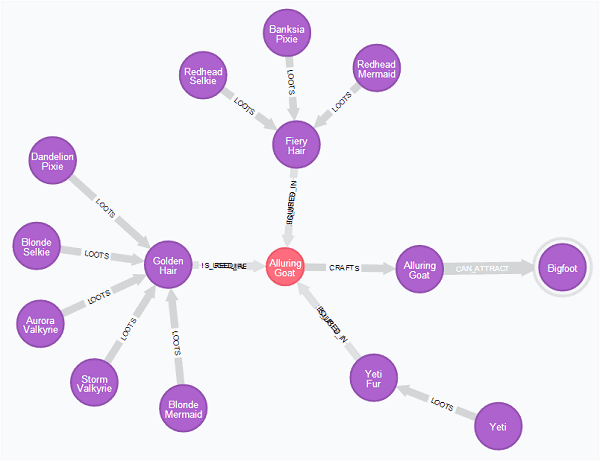 This places Bigfoot at the peak of its hierarchy. 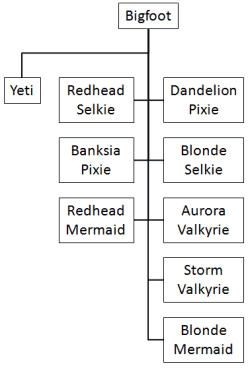 If you repeat the same exercise for every monster in the game and compose their hierarchies together, then you’ll end up with a more complete monster hierarchy covering most of the monsters that exist in the game.

Once we have both the quest hierarchy and monster hierarchy we can do some interesting analysis.

For instance, if completing Quest 1 unlocks Quest 2, and catching Monster 2 gives you the loot you need to make the bait for Monster 1: 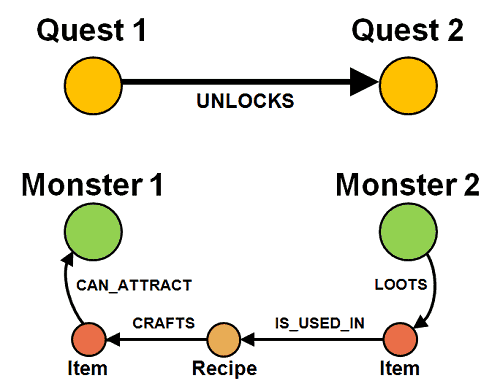 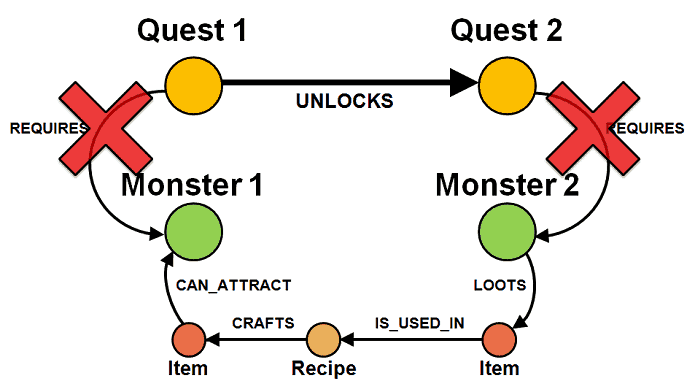 This is to ensure that we do not break the sense of progression as the player progresses through the quests.

Otherwise, as a player, you have to catch Monster 2 multiple times to get the loot to make the bait for Monster 1, and then take several attempts to successfully catch Monster 1. Just as you had finished with that cycle, the very next quest (or shortly after) you are asked to catch the same monster again, which doesn’t make for a very satisfying playing experience.

Remember, the situation might be even worse if you have to first catch other monsters in order to make the bait for Monster 2.

When you successfully catch a monster, you receive a gold reward from the Ministry of Monsters and a chance to get the monster’s loot.

Therefore, for monster catching, there’s an equation that needs to be balanced:

Whenever you change the price of an item that is either a bait or a loot, it can have a profound impact on the monster hierarchy:

Thankfully, Neo4j makes this really easy, which is important because whenever we introduce a new monster (and it happens pretty regularly) it has an impact on all other monsters in the same region as there is a new competitor for food!

I hope I have given you a flavour of our use case with Neo4j. In general I find graph databases to be the most powerful and natural way to model a domain, especially for domains with complex and/or highly connected datasets.