Note: don’t forget to check out the Benchmarks page to see the latest round up of binary and JSON serializers.

When working with the BinaryFormatter class frequently, one of the things you notice is that it is really damn inefficient… both in terms of speed as well as the payload (the size of the serialized byte array).

Google’s Protocol Buffers format is designed to be super fast and minimizes the payload by requiring a serializable object to define ahead of time the order in which its properties/fields should be serialized/deserialized in, doing so removes the need for all sorts of metadata that traditionally need to be encoded along with the actual data.

Marc Gravell (of StackOverflow fame!) has a .Net implementation called ‘protobuf-net‘, and is said to totally kick ass! As with most performance related topics, it’s hugely intriguing to me so I decided to put it to test myself :-) 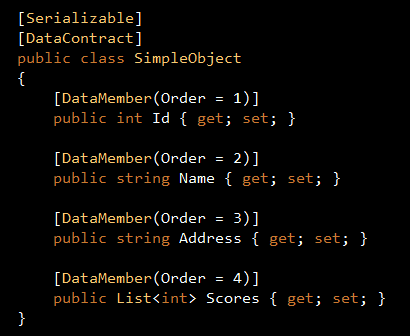 Unsurprisingly, the protobuf-net serializer wins hands-down in all three categories, as you can see from the table below it is a staggering 12x faster than BinaryFormatter when it comes to serialization, with a payload size less than 15th of its counterpart’s.

One curious observation about the payload size is that, when I used a BinaryWriter to simply write every property into the output stream without any metadata, what I got back should be the minimum payload size without compression, and yet the protobuf-net serializer still manages to beat that! 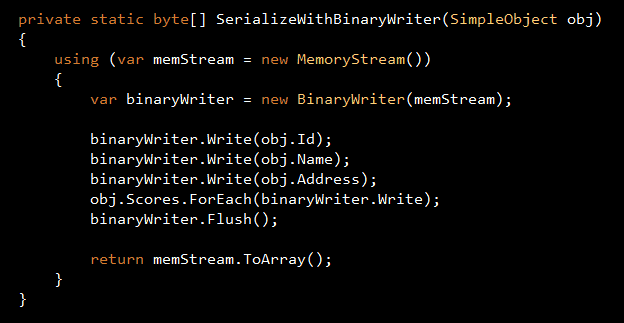 I also tested the BinaryFormatter with a class that implements the ISerializable interface (see below) because others had suggested in the past that you are likely to get a noticeable performance boost if you implement the ISerializable interface yourself. The belief is that it will perform much better as it removes the reliance on reflection which can be detrimental to the performance of your code when used excessively. 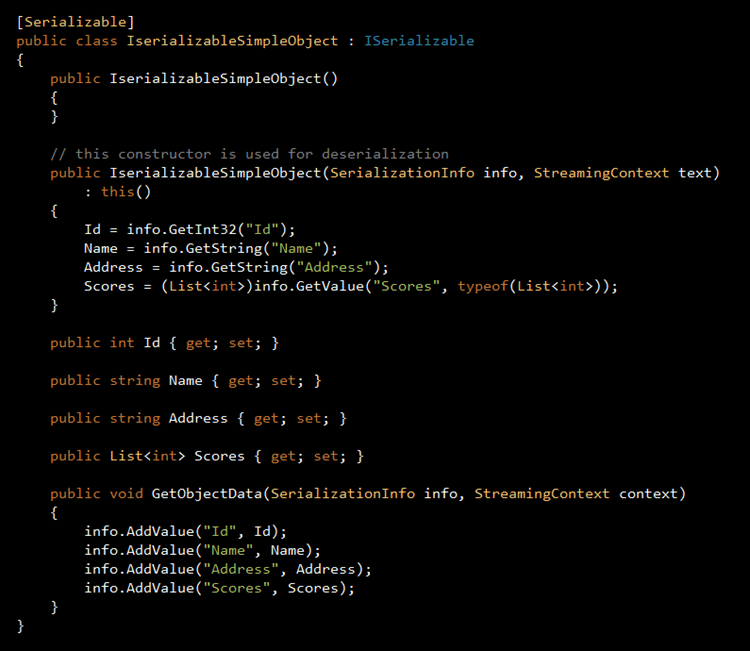 If you’re interested in running the tests yourself, you can find the source code here, it uses my SimpleSpeedTester framework to orchestrate the test runs but you should be able to get the gist of it fairly easily.

As I mentioned in the post, protobuf-net managed to produce a smaller payload than what is required to hold all the property values of the test object without any meta.

I posted this question on SO, and as Marc said in his answer the smaller payload is achieved through the use of varint and zigzag encoding, read more about them here.